Is Stephen Harper Losing His Marbles? 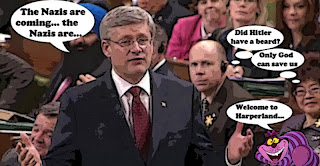 I told you last night I've never seen Stephen Harper look so weak and so vulnerable. So wonderfully insane, so beautifully SCARED.

Well, that's the photographic evidence, and this is why.

The federal New Democrats are enjoying a rise in support that puts them ahead of the Conservatives following the election of new leader Thomas Mulcair, according to a new national poll.

Golly. Can you believe it? The RoboCon scandal a.k.a. The Big Steal, the Oda orange juice binge, Woody Woodworth's sweaty wank, Vic Toews little horror show, Peter MacKay's billion dollar bungle, are finally starting to stick to him like flies on stink. As they say in the Caribbean.

The demented Dictator of Petrolia, is losing his teflon coating.

The numerous clouds looming over the Conservative government have caused many Canadians who thought highly of Prime Minister Stephen Harper two months ago to question his competence, his trustworthiness and his vision for Canada, a new poll suggests.

“It’s pretty clear that Stephen Harper’s brand has taken a hit in the last month on all of these measures. This is a new low for him over the last four years,” pollster Nik Nanos said in a telephone interview.

Or as I prefer to think, the crazed Emperor of Harperland is losing his clothes... 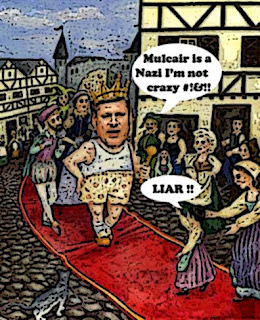 For surely now he must be declared mentally and morally unfit to hold office.

For two days running, the NDP has been accused of being soft on Hitler – even though the party did not exist until 16 years after the Second World War ended.

Because it's bad enough when they call us pedophiles for not wanting the Cons to read our e-mails. But when a right-wing thug who admires Stalin, starts calling the NDP Nazis, we're all in trouble eh? I mean when is enough enough?

With the billy-club governance of the Harper era, we are breaking new ground in the subverting of the democratic process. Technically we might still call it a democracy. In practice it’s a democracy in name alone.

Oh well. At least it's starting to look a lot like Spring... 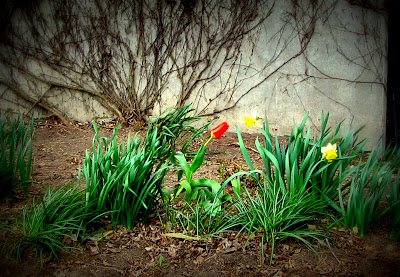 And how do I feel about that? Or the thought of the Con brand starting to look and smell like mystery meat well past its due date.

While Mulcair beats him like a drum, and the whole world mocks him.

Or the fact that I somehow made it to the weekend.

Oh that's an easy one eh?

Oh yeah. One more thing. Now that the Cons have called the NDP Nazis, can we call them dirty stinking fascists?

Have a great weekend....

The public is on to the neo cons habit of attacking the leaders of other parties, i.e. the last 2 Liberal leaders. They tried taking a run at Bob Rae. People are getting fed up.

It hasn't worked so I suspect Harper & his neo cons are now trying to link Mulcair & the NDP to Hitler. Its the old Goebels method of propaganda; tell a big enough lie, long enough & people will believe it. This time it isn't working. People have caught on & are laughing at harper.

If any one qualifies for the hitler title or fascit description its harper & the neo cons. Their treatment of First Nations people is the same as genocide. The changes to Canada's laws to make it easier for corporations to run amuck & restrict Canadian's freedoms is facist.

You're absolutely right! I just wish the rest of Canada had the bravery of the que. students!! We could all use a huge shot of that!!

"Fascism should more appropriately be called Corporatism because it is a merger of state and corporate power."
-- Benito Mussolini
That Harper is quick to jump on corporatist free trade bandwagons all over the World, kow tow to communist China's corporate demands (strange bedfellows the CPoC and Red China, no? Shades of the Von Ribbentrop - Molotov pact of 1939), and happy to steamroller environmental concerns on behalf of corporate avarice merely underscores that they are corporatists through and through,and hence, most assuredly FASCISTS. That, they're filthy, rotten, stinking, treasonous ratbastards is, too, self evident.

Harper has lost most of his marbles - now if only he would pick up the marbles he has left, put them in his pocket and GO AWAY.

Nobody wants to play with him anymore (not that they ever did).

All dictators have the same typo personalities. The first thing they all do is, get control of absolutely everything. Dictators are paranoid, they don't feel safe unless they, do have total control. They also do their dastardly deeds behind closed doors. Their lies, deceit, thefts and corruption, must always be kept from the public. They usually have the criminal element, to do their dirty work for them. Hitler had his henchmen, as does Harper.

In BC, we have had more than our share of Harper's henchmen. Ex BC Liberal Gordon Campbell, Boessenkool and the BC Liberals, all work for Harper. the BC Conservatives, also supports Harper on, the Enbridge pipeline. However, over 75% of the BC citizens, are supporting the F.N. People, to stop the atrocities, on their food sources. The beauty of BC, our woodland wild life. Our beautiful Orca and Humpback Whales and all of our marine life, are much more valuable to us, than Harper could ever be.

I'm in the midst of reading Lawrence Martin's "Harperland" and reveals Steevie Peevie to be cold fish; disconnected socially, calculating, obsessed with strategy and only gaining more power. He has about as much genuine, human warmth as a chain link fence and is not above launching heartless, blistering, foul mouthed attacks on those loosely called his closest friends for minor infractions and s even more merciless on staff and MP's who don't deliver results or screw up.

Quite frankly, I'm ashamed to have this man in the position he holds...

ThinkingMan I'm ashamed that you would slight chain link fences that way, they have a real purpose unlike Harper! BTW Harper refused to go to war against Germany's Hitler and that is a fact ladies and gentlemen ;)

Harper was not even born in Hitlers time and likely you were not as well. I know I wasn't and I am much older than infant Harper.

hi e.a.f...this whole story blows my mind. Where do right-wingers get off calling left-wingers Nazis? When everybody knows that the Nazis were right-wingers, and progressives were their most determined enemies. And the ones who fought the fascists starting with the Spanish Civil War.
The Cons can hope the Big Lie works for the again, but I don't think it will, because it's just too IDIOT...

Hi Cheena...yes I wish we could see more protests like the ones in Quebec in the rest of Canada, because considering what the Cons are doing to this country you would think that more Canadians would be angry. But unfortunately we are horribly complacent, too many regard demonstrations as somehow un-Canadian, and as a result the Harper Cons get away with murder. But don't worry we'll just have to change that... ;)

hi Neil... You know even I have been surprised at how naked their corporatist agenda has become. It seems there is nothing they won't do to advance the interests of Big Oil. Everything from our environmental laws to our foreign aid is designed to advance that agenda, even if it destroys our industrial base, or torches the planet. And yes " treasonous ratbastards" sounds good. I must use that more often myself... ;)

hi sassy...I truly believe that's Harper's problem. Nobody wanted to play with him when he was young, and now we must all pay for it. You know I'd invoke an old highland curse on him and his Cons, but I'm afraid it might be too potent and send Ottawa sliding into the Rideau. Although on certain days I feel that not be a bad thing...;)

hi meadowlark...I have no idea what made Harper such a control freak, but he has been one for a long time, just ask old Preston Manning.
And of course the people of BC have my full support in protecting the stunning beauty and wildlife of that province.
If that ghastly pipeline goes ahead, I may have to hitch hike out west myself...;)

hi Neil...I haven't read Harperland myself, but I already knew that the Harper you see on TV is not the same as the one behind the curtain. He is a foul mouthed thug, and if we could ever get some of that real Harper on tape, I haven't the slightest doubt that even many Con supporters would be shocked, and would never vote for him. In addition to everything else he's a total and complete phony...

hi marie...but then neither was the NDP, Harper's not just crazy, he's ignorant as well...