Vic Toews and the Prison State 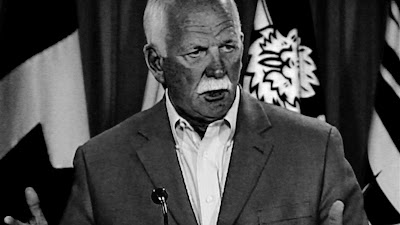 Well I was glad to see Vic Toews pop up on the TV today after his recent physical and mental Vikileaks problems. And I was also glad to see he looked as scary as ever.

But sadly my joy at seeing him back on his feet didn't last long eh? Because as soon as he opened his mouth nothing he said made any sense.

Public Safety Minister Vic Toews said Ottawa will save $120-million annually by closing the two institutions, arguing that the facilities are old and present a challenge for handling prisoners...“Simply put, we have better options.”

So let me get this straight. The Cons are closing two major prisons even though the system is overcrowded, and is about to get even worse when the Con's new crime bill starts sending even more Canadians to jail for "crimes" like smoking pot. And they are forced to double bunk prisoners, which will undoubtedly cause an explosion of violence and mass rape. But Toews claims THAT is why he's closing them?

Mr. Toews said the Tories are closing the prisons in part because the increase in jailed population expected from new harsher crime laws has not materialized. He said the rise in inmate numbers has even fallen short of his own department's estimates.

Even though the Bill just passed about a month ago?

OMG. The Con icon Benito Mussolini once said "The truth is that men are tired of liberty." But they must think we're SENILE.

Although I guess I shouldn't be surprised eh? I should have realized  there was a reason they made their sneaky budget five-thousand pages. So they could hide stuff like this:

The budget contained a line that said: “The government has not built a single new prison since 2006 and has no intention of building any new prisons.”

And I also should have realized that while most Canadians will suffer from the brutalization of society, especially young inmates forced to share their cells and their bodies with older convicts. There probably will be winners.

Registered as a lobbyist in Ottawa on crime bill issues is none other than The GEO Group Inc., a $1.3-billion dollar American private for profit prison company that trades on the New York stock exchange.

Registered with the Office of the Commissioner of Lobbying of Canada as registrant 779026-278825-2 is the THE GEO Group Inc, One Park Place Suite 700, Boca Raton, FL GEO is also listed as the client of The Parliamentary Group, a registered lobbying organization which lists former Reform Party MP Deb Grey as a partner. Grey was the Reform’s first election member of parliament whose legislative assistant is now Prime Minister Stephen Harper.

Yup. They said they would change this country beyond recognition. But they didn't tell us it would be called AMERIKA.

Which reminds me...when Vic Toews says the Cons are willing to make changes to the internet snooping bill.

The Cons are turning us into a prison for business state.

Sign the petition. Spread the word. Stand up to those crazed totalitarians.

Every time I hear of or see this man speak, I feel the need to grab a barf bag. The entire premise around this is privatization dressed up as a "safe communities" act. The only transparency this bunch has is what lies behind everything they do....lining the pockets of those who put them in office.

Appalling. I thought they shut down Kingston Pen because it's a Liberal riding and they'd build a new prison in a depressed harpercon riding.

Deliver a body-blow to Kingston's economy with no consultation, no adjustment mechanisms in place and reward harpercon voters somewhere.

But they're going to "create a crisis" in corrections and then bring in the profiteering scum-bags to make a killing (literally and figuratively).

I expected them to privatize prisons when I first heard of the "crime bill". They needed to create prisoners for the prisons. In the USA when some states implemented anti-latino legislation & started jailing "illegal aliens" it created over crowded state prisons. The solution, send the prisoners to private prisons in other states.

We will be lucky if herr harper & his fascists don't change the laws to prevent voting in 4 yrs.

hi bcwaterboy...yes, as we both know, Toews has an ugly record the size of a football field. But isn't the privatization angle interesting. I wonder if they promised them a steady stream of prisoners to make their investment worthwhile, and maximize their profits? The good news is that Vic is making the Cons look like maniacs again, and that can only help us...

hi thwap...I think you're right, I'm sure they wouldn't have closed the Kingston Pen and the one in Laval, including the ONLY facility for treating mentally ill prisoners, if they had been in a Con riding. But if they go ahead and have American countries running jails in this country it will be the absolute limit. I've read about those prisons in America and not only are they a full blown industry, they pay their guards almost nothing, and treat their prisoners badly. This country is being hollowed out and shamed like no other...

hi Steve...yes, as I told thwap, I have no doubt that was definitely a consideration. And as thwap mentioned it's a real body blow to Kingston. Those Cons are simply shameless...

hi e.a.f....I must admit that this move caught me by surprise, since I never heard the Cons talk about privatizing the prison system. But of course I should have known better. When I saw them going after the "invisible criminals" I should have known that the only winners would be those who depend on them for profit. But it will cost the Cons. That so-called anti-crime bill will not only help bankrupt the provinces, the fact that those measures have failed in the U.S. will come back to haunt them. And hopefully lead to the day when we can defeat them and then jail them...

I had something that could be considered a panic attack yesterday when I was reading up on the current state of Canada. And now, I think i'm about to have one again.
If Harper has any brains left, he should fire Vic Toews. He either has mental problems or is very cruel by nature. I don't know HOW that man got into politics and managed to become the Minister of Public Safety.

My name is mirko bucik I am working to expose this plan to the Canadian public in the coming months. Any petitions, information or support is more than welcome. Your more than welcome to contact me and we can go from there. Mirkobucik@gmail.com