The Liberal Lynching of Nycole Turmel 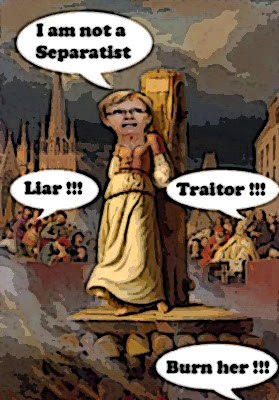 As the Liberals continue their fevered pathetic assault on Nycole Turmel.

No doubt hoping that out of her ashes, their shrunken party will rise again, like some fleshless phoenix. Or some charred scarecrow.

Even as they help fuel comments like these in the pages of the MSM:

It probably wouldn't hurt if they read this column.

Because then they might, hopefully, ask themselves, what the hell are they are doing?

Do they really believe that by bashing a 67-year-old granny, whipping up a Red Separatist Scare, and encouraging anti-French feeling, that they can win back Quebec?  The province they absolutely need to recover, if they are ever to become a viable party again.

And where else do they think this tempest in a cracked teapot will help them? In Manitoba, Saskatchewan, or Alberta?

Or will it help bring the real separatists to power, help the Cons win another majority, and maybe even contribute to the destruction of our country?

Gawd. Never has the Liberal Party stooped so low. Or acted so dumb.

And worse they can't seem to understand that granny Turmel, and her gang of young Quebec MPs, have dealt the real separatists the hardest blow they have EVER received.

Oh boy. For years I have tried to be as non-partisan as possible, and avoided being too harsh on the Liberals, hoping against hope that progressives would unite to defeat the Cons. But not any longer.

Somebody please stop this madness.

Before it damages our country further...
Posted by Simon at 12:44 AM

To be fair, the Harpercons have been just as actively participating in this witch hunt. And no, they haven't quieted down, despite the revelations of the pasts of Denis Lebel and Mad Max Bernier. The PMO has ways of spinning their situations.

Plus, one thing I really can't ignore, is the NDP themselves, at least some of them, anyway. Remember, as the Liberals learned a long time ago, more often than not, the enemy from within is more dangerous than the enemy from without. Mulcair has been eerily silent, not defending his fellow MP & interim leader. And there has been an anonymous NDP staffer flapping their gums over at Rad Can's RDI, which is more reliable than most media outlets.

Blogging SupposiTories are all proving to be equal opportunists--they're ranging from saying that Lebel should resign from cabinet to he could stay but never run for leader. Wow.

I always said after the election to never count the Bloc Quebecois out of the game. Now, I'm more sure than ever that they will bounce back. Trouble is, they're not as much fun without Gilles Duceppe and his zingers. Louis Plamondon (I know, he's only interim) is, quite frankly, a boor.