The British Riots and the Broken Society 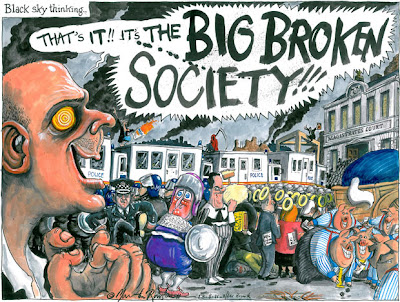 First came the feral phase. The young are animals.

They are essentially wild beasts. I use that phrase advisedly, because it seems appropriate to young people bereft of the discipline that might make them employable; of the conscience that distinguishes between right and wrong.

They respond only to instinctive animal impulses — to eat and drink, have sex, seize or destroy the accessible property of others.

Then came the punishment phase. Beat them, flog them, shoot them.

Throw them out of their homes.

Now at last some are turning their sights on the culture of an economic system that makes greed a virtue.

In a society that has abandoned or devalued most forms of mutual assistance in favour of a solipsistic entrepreneurialism, it's hardly surprising that, faced with the end of the good times, people help themselves. Fear and greed are our ruling passions. That's true of the kids smashing shop windows to steal trainers. It's also true of the MPs fiddling their expenses, the police officers taking backhanders, the journalists breaking into phones. Why wouldn't they? Why wouldn't any of us? The example has been set by our new masters, the one per cent for whom and by whom we're governed.

A system that creates two kinds of criminals.

These have been a disgusting few years. That form of looting known as corporate larceny continues to rage unchecked. Economic scavengers bring the world to the brink of ruin. We don't need the discrepancy between rich and poor laid out in percentages, we see the brute fact of it with our own eyes in the shops and on the roads and in the restaurants of our richest cities. One medium-sized banker's bonus would probably pay for all the trash that's been looted this past week. And we don't even have the decency to conceal the extent of this legalised pillage from those for whom, without sentimentalising them, a pair of trainers is a treat.

The poor who must be punished, the rich who get away with it. Even as the rich get richer, and the poor get poorer.

And the money runs out... 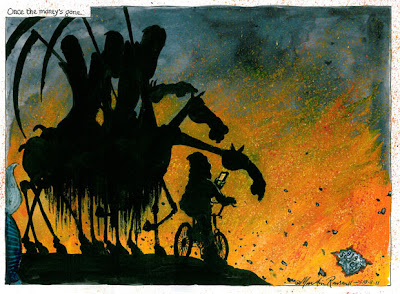 And all I can say is that if it took four nights of rioting to get people to focus on our corrupt and decaying economic system, in the long run of history it will be worth it.

Because if the message is not understood, those riots will spread all over the world. Even in Canada, where youth unemployment is twice the national average, and Stephen Harper's Cons are planning to throw tens of thousands out of work, and lock up even more young people in their swanky new prisons.

Yup. The rich and the old can scream all they like. Jail them, throw them out of their homes, flog them, hang them. But it won't make a bit of difference. The young will not be denied, will not be robbed, will not see their future torched.

For years I have warned about a generational war. And now the writing is on the wall.

Or there will justice, and REAL change.

Or there will be trouble...

When peaceful protest falls on deaf ears the silenced have no other left open to them but violence.

This does not excuse the behavior witnessed in Britain but it is to say that the violence was inevitable.

If the rioting had evolved back to peaceful protest after that first night, they may be winning today. Sadly through their subsequent actions the rioters ceded the narrative to their oppressors

hi Kev...it's true what you say unfortunately. The rioters have played into the hands of the Cons and the establishment.
But as I said in the post, they have triggered more soul searching about our corrupt political system than I have ever seen before.
So although I was shocked by the violence, and the criminal behaviour, in the grand scheme of things I still am glad it happened. Because in Britain it has been a long time coming.
It's still a class-ridden society, and if you're a dead end kid, there is no way out...

Hi, Simon
Yes as you say some good was accomplished. That it happened in a western so called democracy is significant.

This was but one more salvo across the bow of neoliberalism, there are many more to come,even on this side of the pond.

Finally the enemy has begun to be engaged.