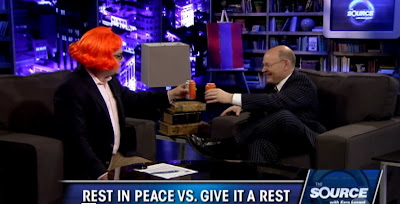 Oh boy. This going to be embarrassing eh?

Remember how in my last post I said people should ignore how Lezra Levant, in an interview with Michael Coren, mocked the way Canadians were reacting to Jack Layton's death?

Well I changed my mind... 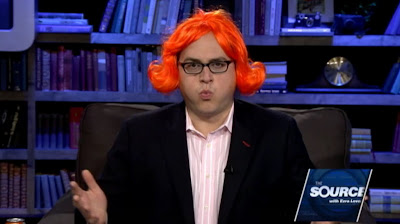 Because after screening the interview in question I now feel it may very well be...in fact almost certainly is... 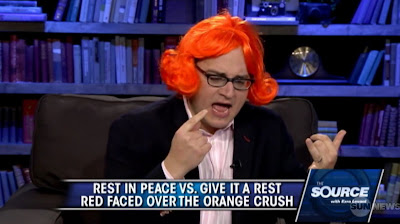 The worst television interview ever recorded... 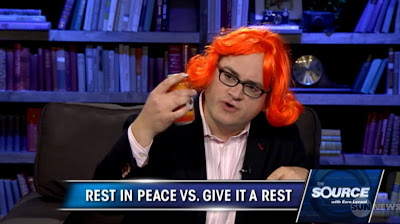 In the history of television... 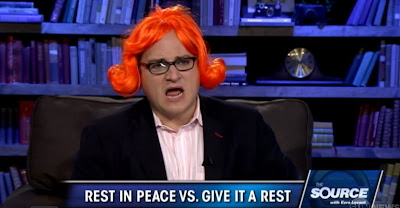 Anywhere in the world.

And the most RIDICULOUS. So EVERYBODY should watch it eh?

Because if Sun TV News had any credibility left, which I doubt, it's all gone now.

You know... somebody should tell Lezra that the makeup person didn't work for six long hours to make him less ugly, only to have him put on a wig. Hint. Hint.

But they never tell those bitter nerds the ghastly truth, because they're afraid to hurt their feelings. Or cause them to spit when they talk...even more than they already do. So they never learn. And without that crucial feedback they are LOST.

Since Lezra is now doing the show in drag, in an obvious attempt to improve his dismal ratings.

At least now we can call him DIVINE...

Although, sadly, unlike the real Divine, there is nothing beautiful about Lezra.

You know I wouldn't be surprised if he dresses up as Ann Coulter next. And challenges the head of the CBC to eat a heaping portion of scrambled eggs off his ample behind.

Heading for the bottom...

I don't even know how to respond to that....display.

Omg, I know. I've seen, like, two Ezra things and that was the second (and hopefully last). I think, and I may be mistaken, at one point, they agreed that Jack Layton killed God. That part, whatever they said, blew my mind as a Christian. And then to mock the spirituality of the upcoming funeral? Naw. Just naw. Makes you wonder from where they spawn their completely unChristian ideas from to begin with.

The opposite of Ezra Levant and company.

hi double nickel... I don't blame you. I didn't know what to say either, and although after I saw the video I wrote the post, screaming with laughter, in about 20 minutes. When it was over I wasn't sure I should publish it. But then I thought what the hell. Everybody should see what's passing for journalism in Canada these days. And be rendered speechless like you and me...

hi prin...until this video I had seen about a sum total of five minutes of Ezra Levant. Five minutes that I now feel were stolen from my life. But I watched this video from beginning to end. I didn't intend to, I only wanted to grab some pics of Lezra in a wig, but as the video rolled, my mouth fell open, because I couldn't believe even Lezra could be THAT bad. Just ridiculous and BORING. As for Coren, he somehow managed to steer the conversation from Jack to the Inquisition, which just about made my head explode.
And yes, as you point out, it was all very un-Christian..

hi sassy...yes you're right. He had class and they never will. Of course, after writing this post I'm afraid I'm somewhere in between. I probably shouldn't have written this post. Not at a time like this. Some things are better left unsaid. But I'm afraid after I got those screen caps I just couldn't resist... ;)

This is the full measure of a very small-minded man, Simon.

When they hit bottom they'll break out shovels and start digging.

Anonymous said...
This comment has been removed by a blog administrator.
2:46 PM

hi anonymous...I have no objection to you insulting me and others who think Ezra Levant is a disgrace. You are entitled to your point of view. But please don't slander Soros, I don't run libellous comments. You must be confusing him with Pope Benedict.
If you wish to resend your comment without that libnel I'll be happy to publish it. If not don't bother...