Jack Layton: The Sadness and the Hope 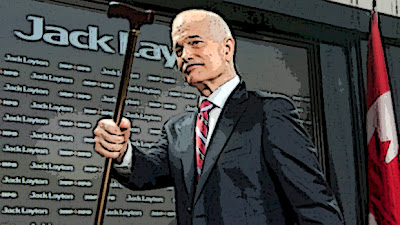 I was walking my dog just before dawn this morning. There was a chill in the air I hadn't felt for months. But in the distance the sun was rising orange. So I should have known that Jack had died.

And when I found out I was so sad, not just for my MP Olivia, his family, his friends, and his party. But also for the Canada I love.

Because I admired Jack for many reasons. For standing up for the rights of women, gays and lesbians, seniors, and the poor people of this country.

I admired him for fighting so long for the human rights of homeless people.

Because believe me, like so many other humble citizens of this country, they too are mourning him today... 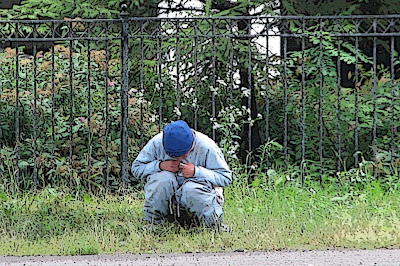 I admired Jack for the way he defended our precious medicare system from those who would destroy it.

I loved him for his down to earth humanity.

And for being a true friend of gay people... 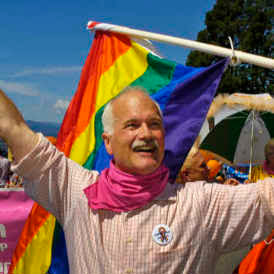 But most of all I admired and loved him for the way he reached out to the French-speaking people of Quebec, and convinced them to give Canada another chance.

Because keeping our country together means everything to me.

I was watching the coverage on Radio Canada this afternoon, and reading their website, and it was deeply moving to see the tributes flowing in like a veritable torrent of grief.

A great one, a sincere man, honest, positive, that's why we loved him. Thank you Jack.

Even if I'm only ten years old I think he was the best politician forever.

Because even a kid knew a good man when he saw one.

I was amazed how many of them compared him to Rene Levesque for his honesty and his humanity. Or all those who called on him, the Anglo federalist, to look after them from above.

My guess is that Quebecers just got themselves a new political saint, and that they will not easily forget him.

Just like I will never forget Jack's last message to Canadians.

His message of hope for cancer patients. His love for his country. His faith in the youth of Canada:

There are great challenges before you, from the overwhelming nature of climate change to the unfairness of an economy that excludes so many from our collective wealth, and the changes necessary to build a more inclusive and generous Canada. I believe in you. Your energy, your vision, your passion for justice are exactly what this country needs today. You need to be at the heart of our economy, our political life, and our plans for the present and the future.

And his last words:

Rest in peace my happy, brave warrior. For we will NEVER forget you.

But sooner or later we WILL change the world.... 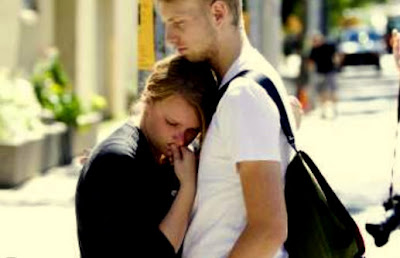 Oh Simon, I thought I was finally getting through the tears, and maybe even capable of making dinner after reading and hearing so much throughout the day that just made me sob like a jilted bride.

Then I stumbled on your tribute, and I felt the raw hurt all over again. I was probably one of his most ardent critics from the left but I did admire the man. And his last political act was to defend workers - to go to bat for those locked out CAW members.

And now I read about how much strength he had to muster, feeling so very poorly, to pull that off... and well, it just breaks my heart. And I'm sobbing for Olivia and his family because loosing someone so young and vibrant and so much a part of your daily life must be sheer devastation.

Great post Simone. I couldn't agree with you more. Jack was all you said and likely more.My condolences to his family. R I P Jack

hi Beijing...I'm sorry if I brought back that raw hurt. But I'm afraid we're all going to have to live with it for a while. When I saw him at that last news conference I knew he was losing the battle. But I didn't expect the end to come so soon. So it was a real shock and it seems so unfair. And yes I feel for poor Olivia, because they were so obviously in love. The only consolation is that now she'll be back in my riding, and if I see her go by on her bike, I shall jump on mine, chase her, and tell her how much we love her... :)

hi marie...I'm glad you liked the post. I wrote it rather quickly, but it came from the heart. It's all very sad but one consolation is this. Isn't great to have a good person to celebrate? In the political world there are so few...

hi prin...yes it is sad, cruel, and unfair. But I'm trying to turn sorrow into strength. And as I told Marie, being able to celebrate the life of a political leader in Canada is a rare and beautiful thing. And I will cherish that last message he left us FOREVER...

Prime Minister Martin had promised to call the election within thirty days of the release of retired justice John Gomery’s final report on the Liberal sponsorship scandal, which was delivered as planned on February 1, 2006.

Either way, therefore, a trip to the polls was imminent. But NDP strategists thought it dangerous to allow the government to set the terms of debate, and were concerned that on the key issue of political ethics the party would be caught in a squeeze between the Liberals and the Conservatives.

They believed the Liberals would accept virtually all of Justice Gomery’s recommendations and that a chastened Liberal Party could win a majority government.

But it was what Layton did not say that was more interesting. He did not mention the most ideologically right-wing prime minister in Canadian history was about to be sworn into office, and he did not mention while the NDP’s 2006 election result was impressive, the party no longer held the same sway in Parliament.


- the NDP is largely responsible for putting Harper in office in the first place, in 2006. You tell me is it normal for a supposed left winged party to be celebrating this 'big change' over a few extra seats, without much acknowledgement that the most ideologically right winged PM was about to be sworn into office?

Nadine that is absolutely incorrect and pure math will show how wrong your statement is.
Wiki for number of seats at desolation of parliament: http://en.wikipedia.org/wiki/Canadian_federal_election,_2006

So if Layton NDP had decided to prop up and support the corrupt Liberal govt this would have been the outcome:

Thus the Liberals would have lost the vote of confidence no matter what. And the NDP would have been seen by the Canadian public ad supporting a corrupt govt in power. Thus it was better politically to be seen in not "supporting corruption" (sponsorship scandal)unless of course one thinks that political corruption is okay when only certain parties do it.

Anyway, you can keep believing the mythology spouted by the Liberals or do the simple math.

That said, the Liberals only have themselves to blame for their demise and by extension, their responsibility in putting Harper in office in the first place.