Jack Layton and the Power of Myth 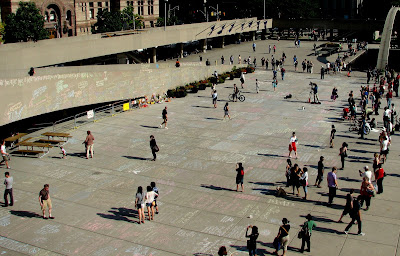 On my way home this evening, I stopped by City Hall to check out this improvised and rapidly growing memorial to Jack Layton.

Where people were dropping by to write chalk messages to the lost leader. 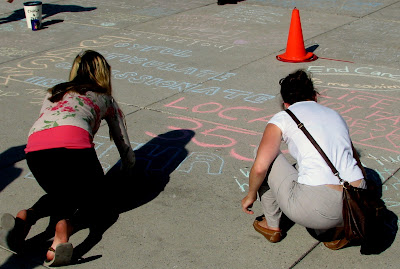 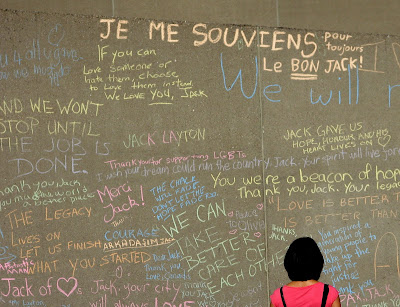 And then when I got home, I read a story by Barbara Yaffe, who like most of the media loons in the Ottawa pond, was echoing the plaintive call of the Con media: Jack is gone, so the NDP is doomed.

Canada is not a socialist-minded country. Of 10 provinces, only Manitoba and Nova Scotia have New Democrat premiers. Canadians never have installed an NDP government federally. In Quebec, the NDP's recent success federally flowed from a political vacuum left by a sudden collapse in the Bloc Quebecois' following.

With Layton's passing Monday, his party now faces the prospect of losing much of the support it had from voters who were attracted by Layton himself.

And it made me wonder if any of those predictable loons knows what they're talking about. Because like most of those wretched scribblers, Yaffe can't seem to see the forest for the trees. Or in this case the writing on the wall.

These troubled economic times couldn't be BETTER for a social-democratic party. And the NDP may have lost a great leader, but Layton has bequeathed them and other progressive Canadians, something even more powerful: a real dyed in the wool Canadian myth.

Do you know how much a myth is worth in a country starved of them? Jack's tragic death, the person he was, and the message he left behind, have given progressives a secular saint for a better world, that we can hold up like a candle, or wield like a weapon.

One that will shelter the new NDP MPs as they wander through the Valley of Con Death, help excuse any rookie mistakes they might make, neutralize the "separatist" slander that will be excreted in their direction.

And most importantly, mobilize young Canadians to their side, by giving them somebody to believe in. At last.

Because there they were on their knees today... 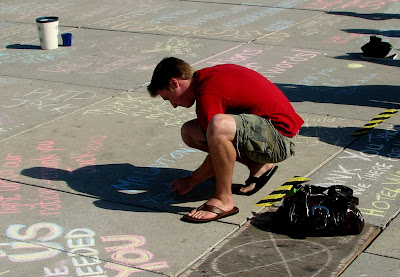 One after the other. 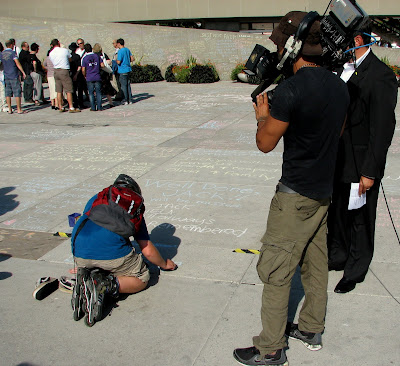 For he did so believeth in THEM.

Now they believeth in HIM... 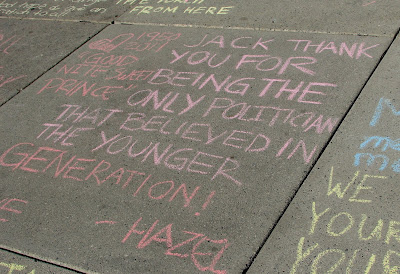 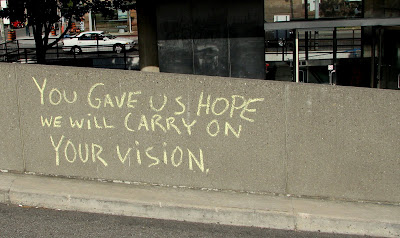 And when you ask them to win one for Jack they will. And so will a lot of other Canadians.

You know the Cons know the power of a myth, and they are afraid.

The setup is tempting: Ailing leader, cane in hand, bravely hobbles through an election campaign with a wince and smile, leading his troops to shocking, unprecedented triumph — only to die prematurely and gracefully like a monarch butterfly.

And so they should be.

Glory Hallelujah !!! I want to be an altar boy in the Church of Jack Layton !!!!

Stephen Harper and his Cons are the Satanic Hordes. 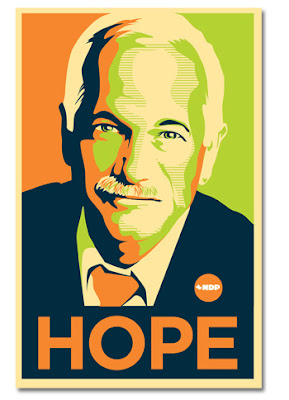 Well we can both count on one thing, Simon; neither Rob "Boss Hog" Ford or Stephen Fucking Harper will EVER receive a public tribute like Jack has earned through people's love and respect.

As for the "demise" of the NDP - nonsense. The NDP has always been a party of integrity and commitment to the people and widely recognized as such; its reputation as the "conscience of parliament" is long and well established and will no doubt continue. It didn't come in to being with Jack. He was just one more in a long line of bright, progressive lights that extend back to Tommy Douglas. Certainly the NDP will morph somewhat with a strong Quebec contingent, but I can't help to think of this as anything but a positive and invigorating development for the party as many of the people who switched from the Bloc and PQ to the NDP weren't simply voting for Jack and his personality but for what they saw as the basic progressivism of the NDP which are already the values, political and social, of many Quebecers, and it was a better or more effective way to get themselves heard in Ottawa than they were getting through Duceppe and the Bloc.

The Harpercons and the moribund Liberal party are invariably going to treat any disaffection that Quebecers feel for them as an aberration or an FLQ/soverigntist plot, so the jabbering class at Sun Media and CTV are going to highlight that myth as garishly as possible to make it sound like truth. The NDP may be the only way to get Quebec to feel like it's a part of Canada as they know that they've been used by both the cons to gain power and the Liberals to hold on to it, with little recognition for and of Quebec itself beyond political expediency. If anything, the NDP has a better chance of of becoming a truly national party representative of the People than does an essentially western regional party made up of rednecks, neocons, and christofascists or a formerly major political party - the Liberals - that has completely lost its vision, relevance, and political way through self interest, corruption, and neo-liberal policies.

What the NDP has to focus on is to continue to offer a strong progressive alternative, to eschew the growing militarism and security state of the cons and show people how we're being buffaloed and hornswoggled into "austerity programs" that only benefit the already obscenely wealthy. Jack saw all that as well as seeing that it was in the People that true political power, democracy, progressivism, and compassion lay. Jack saw that in all of us and it's time we recognize that too.

Your rough comments are untimely and uncalled-for. This is a time to put party differences aside and give this man a funeral devoid of swearing and pig ignorance.

Hi Neil... thanks for your great comment, so eloquent as usual. I have so say that the emotion, the idealism, the hope that I have seen out there has greatly lifted my spirits. Like you I realize that it will be a hard struggle. The Harper Cons, with sadly to say the help of some Liberals, will no doubt try to portray the NDP as traitors to Canada. But if the NDP sticks to the high road, and offers people a nobler, more optimistic option, they shall reap the fruits of their labour.
And our enemies will look cheap, and divisive.
The other thing is that people keep looking at what's happening without looking at the times we live in.
Those times could become very very dark very quickly. And in that darkness Jack's message of hope will resonate mightily...

hi anonymous...are you talking to me or Neil? Because if it's me I don't really understand what you're talking about.
I'm not trying to turn the tragedy of Jack's death to partisan advantage. I was only showing you what I saw, what I heard, and what I read. And drawing some obvious conclusions. Something I've never seen before is happening, and I think it has the potential to usher in a new age in Canadian politics. I mean take a look at what's happening. Have you ever seen anything like it?

P.S. My Mum wants to know where did you catch me swearing? Because I'm pleading not guilty to that one too... ;)

Great post! I agree with you. Jack Layton has left behind a myth, one that is worth pursuing. One that promises us all much more.