The Coronavirus and Canada's Bigot Epidemic 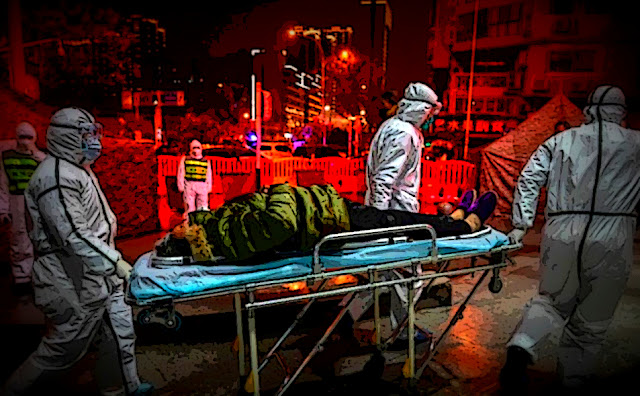 The images are apocalyptic, and the torrent of hysterical news stories are enough to make anyone reach for a face mask, or a hazmat suit.

But so far at least the coronavirus cannot even be compared to the far deadlier influenza virus.

And in Canada, with only a few mild cases, this is the biggest threat. 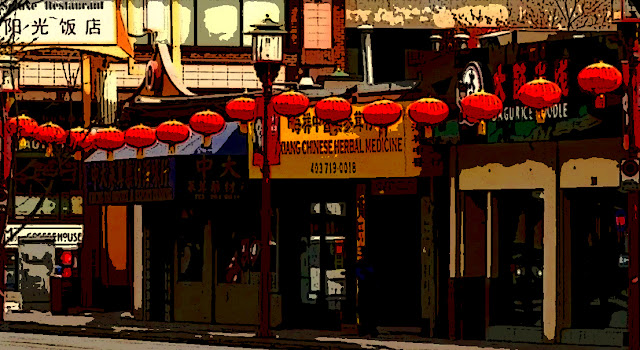 A severe outbreak of ignorance and racism.

When a popular Toronto blog, reviewed a new Chinese restaurant on Instagram on Monday, the post quickly received a torrent of racist comments.

And nearly 9,000 parents in the York school district – an area north of Toronto – signed a petition demanding students who had traveled to China in the last 17 days be prevented from attending school.

“This has to stop. Stop eating wild animals and then infecting everyone around you,” wrote one petition signer. “Stop the spread and quarantine yourselves or go back.”

With Chinese Canadians being targeted by bigots for no good reason.

Just like they were during the SARS epidemic, as Globe editor Adrian Lee remembers.

I remember the weight of the textbook-laden backpack I was trucking that morning. I remember the gratitude I felt when I saw a seat open up on the subway car. And I remember that I’d barely settled into it when the person next to me bolted up, put a mask on his face, and backed away. I remember how he stared at me with disgust.

He saw me as Chinese by both of the word’s definitions. I was ethnically Chinese – Han, to be precise, as 92 per cent of China’s population is. I was therefore, in his panic-blinded eyes, from China, and because of my body’s presumed geographic proximity, I was an inherent health risk, even though I was born and forged in Canada.

As they have been since the days of the head tax, and as they are now.

Not just by low bigots like that one, but sadly also by those who should know better... 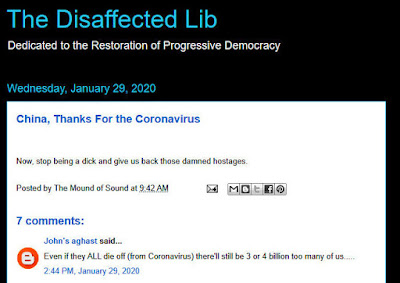 And legions of haters on the internet spewing bigotry and fake news who don't seem to care who is hurt by their ignorance.

Today my son was cornered at school by kids who wanted to “test” him for #Coronavirus just because he is half-Chinese. They chased him. Scared him. And made him cry.

I was the same age when I was bullied for being Pakistani.


It's all absolutely disgusting, and all I can say is thank goodness for Justin Trudeau.

Prime Minister Justin Trudeau urged Canadians to stay united and warned against the rise of discrimination as fears of the coronavirus spread.

"There is no place in our country for discrimination driven by fear or misinformation," Trudeau said at a Lunar New Year celebration at a banquet hall in Scarborough, a suburb of Toronto. "This is not something Canadians will ever stand for."

It's clear to me that some Canadians are using the fear of an epidemic as an excuse to discriminate against Chinese and Asian Canadians, and it's got to stop.

I can assure everybody that Canada's health workers stand ready to defeat the Corona virus. But we need everybody to defeat the double threat of racism and xenophobia. Stand up for Chinese Canadians and don't let a virus divide us. https://t.co/FgFXnhgipt via @torontostar
— 🇨🇦 Simon 🏴󠁧󠁢󠁳󠁣󠁴󠁿 🌈🏂 (@montrealsimon) January 29, 2020 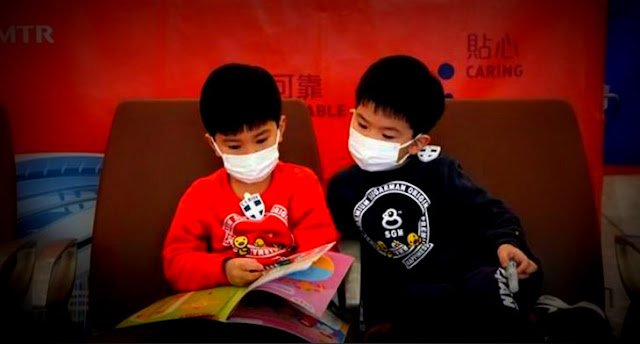 Justin Trudeau is bright and well-read, and particularly knowledgeable of French literature. So I'm guessing he's read Albert Camus' The Plague. I read it at university and Camus is one of my favorite writers. The moral of the story is that the more insidious disease affecting (or infecting) the community is not the mysterious outbreak in and of itself but the epidemic of paranoid xenophobia that engulfs the people from within, and the visiting doctor's struggle to have cooler heads prevail against the widespread panic of the human condition when faced with the unknown. A play on words: "communicable" disease.

Humans respond to storytelling, so this is why a background in the liberal arts is important if one is to be an effective communicator in matters of science. Because now with the Internet and the explosion of fake news appealing to the lowest common denominator, rage-bait rhetoric from bad-faith actors including the headline-addicted M$M gives a whole new meaning to the phrase, "going viral." Especially when you add anti-vaxxers to the mix. Addressing the psychology of epidemiology is just as important as addressing the disease itself. You don't need to be a medical professional; you just need to be a compassionate leader who addresses the public's valid concerns without legitimizing their worst instincts, which describes Trudeau to a, well, "T." After all, what was it that one of his favorite philosophers said about fear being the path to the dark side...?

Suhana Marshland was desperate to have an expert suggest panic on CBC news the other day. Despite her frenzied attempts to sensationalise ,the professional remained professional and urged calm.

Later Vassly Kapelos went after someone because Canada had not adopted the American emergency overresponse. Her intended victim calmly told her that they were following WHO guidelines.

Attempts to drive ratings by creating panic do not become the .

It's scary to see how even some progressives like the Disaffected Lib can let fear turn them into racists. Chinese Canadians deserve better.

They will eventually develop a vaccine to deal with this but sadly, the bigger disease of racism will never be cured. To be afflicted requires no close contact with other bigots. All it needs is ignorance, intolerance and the inability to harness even a modicum of decency, respect and compassion. Quite literally, they are in fact the walking dead.
JD

I'm a born in Canada Chinese-Canadian so I know exactly how Adrian Lee is feeling. Anti-Cinese racism is just beneath the surface, and the bigoted will use any excuse to come after my community.
Thank you for defending my rights, I wish more Canadians were like you. If I could leave this country I would.

Well, I am covered. I bought bottle of bleach yesterday and am headed out to my favourite Chinese restaurant restaurant in a few minutes.

Hi Jackie....Fear is definitely the path to the dark side. I remember reading about the horror of AIDS when tens of thousands died and almost nobody cared. I heard that some nurses during the SARS emergency were socially ostracized. So I'm not surprised to see it happeni here even though nobody has died in Canada. But bullying Chinese-Canadians is so cowardly it makes me see red...

Hi rumleyfips...some media have been hyping the Corona pandemic, and panicking people unnecessarily, which is clogging ERs that are already struggling to cope with the flu season, and of course fuelling prejudice. They need to control themselves, because things will get worse before they get better, and full blown panic is the very last thing we need....

Hi anon....I think the Disaffectd Liberal just didn't think what he was saying, and the only reason I mentioned him was because he's intelligent enough to know better. But some of the stuff on the internet is far worse. One of the fake news stories popping up everywhere is that the Coronavirus was made in a bio lab in China, which of course makes no sense, but hey science alone is so boring....🙄

Hi JD....I've raged against racism since I was a teenager, but people who use an illness that could have started anywhere to bully people who are suffering the most is something I won't stand for. I lost quite few followers on Twitter when I tweeted my support for Chinese-Canadians but I don't care. We all need to help get the facts out and fight panic, or we could find ourselves living in a nightmare...

Hi anon....don't even think about letting a harmful of bigots chase you out of your country. I'm sure most Canadians are on your side, and if anybody should get the boot it's the bigots. Most of them are just ignorant, and that is their worse punishment...

Hi jrkrideau....I went out to a great Chinese restaurant (The Pearl) in my neighbourhood the other night. And since I absolutely LOVE Chinese food, I'm really looking forward to showing my solidarity over and over again...😉

I see that Markham with a large Chinese and other East And Southeast Asian population, and the giant Pacific Mall, is located in York. Such bigotry must be a bitter pill for its Asian population. Anonymous Canadian of Chinese ancestry, I agree that bigots must leave, not Asian-Canadians.

Not many Chinese restaurants near here; mostly Vietnamese and other Southeast Asians, but many of their owners are Han (Chinese-ethnicity) Southeast Asians. But I live due north of our oldest Chinatown by the métro orange line or the 55 bus.

The Chinese were wise to cancel the New Year's celebrations, but these also dimmed the events in the worldwide diaspora.

Chinese food is packed full of cholesterol and sodium.

Depends on what you eat. Here in Québec, so is poutine. (I hate poutine; waste of good frites).