The Con Leadership Fiasco: Is This All There Is? 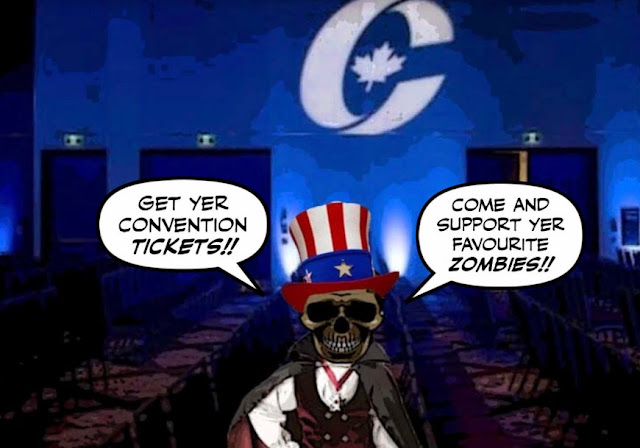 The deadline has come and gone. Nominations for the Con leadership race are now closed.

And one thing is immediately obvious, this country has never seen a lousier line-up.

In fact so bleak is the situation, that when I think of the two front runners, Peter MacKay and Erin O'Toole, I can't help but think of this... 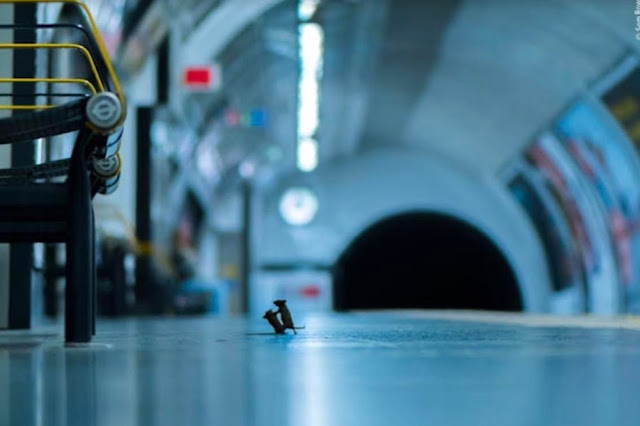 For that's how low the Cons have fallen.

So low that even Andrew Coyne calls the leadership race a fiasco.

A race that was supposed to be an opportunity for renewal for a party that, despite its failure to break through in 2019, was well placed to defeat a weakened Liberal government in the next election, has instead dwindled to a contest between two serious candidates and a collection of rookies, oddballs and outsiders. The word “fiasco” comes to mind.

And suggests that even the candidates he calls "serious" are mediocre.

Even the serious candidates leave much to be desired. Mr. MacKay has the more impressive résumé on paper, but only on paper, his series of cabinet posts noteworthy for the footprints he failed to leave behind. Besides his brief stint at veterans affairs, Mr. O’Toole is distinguished mostly for finishing third to Andrew Scheer and Maxime Bernier in the 2017 race.

Stephen Harper was in power for nearly a decade, yet failed either to recruit much in the way of new talent or promote from within. You could count on one hand the ministers in his cabinet who had any real reason to be there other than slavish personal loyalty to the leader, the one principle to which his government was committed.

And I certainly agree with that. Harper made them who they are and the Cons are still his grubby party.

But what Coyne fails to mention, is that another big reason the Cons can't attract any decent candidates is that the party is now more American than Canadian...

And thanks to Andrew Scheer is also riddled with religious extremists.

Which explains why the sleazy O'Toole is crawling on his belly trying to attract the social conservative vote.

In a new fundraising email, Conservative leadership candidate Erin O'Toole takes a shot at rival Peter MacKay for insisting on a solid caucus front on so-called "conscience" votes, accusing him of behaving "just like Justin Trudeau does."

O'Toole said in the email that he would allow both caucus members and cabinet ministers in a government led by him to vote their consciences on "moral issues" — an apparent reference to votes on abortion and a clear play for the support of the Conservative Party's powerful social-conservative wing.

And because those religious extremists are so powerful, and control so many convention votes, sooner or later MacKay will also be forced to crawl before them.

It's going to be an ugly spectacle, and no decent Canadian can vote in good conscience for a party like that one.

A party that would savage our country, by first savaging its values.

Which is why I'm hoping the Con leadership race will be as weird as the last one... 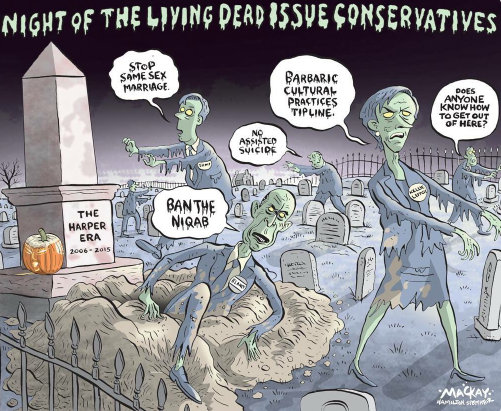 Even if it has only half the number of zombies.

Let them show Canadians again who they really are.

And why they must never be allowed to form another Canadian government...

What about Rempel, she would Buffalo us. Its to bad leather boy De Mastro got taken out.

They really are ugly, Simon, and their response to the blockades has revealed it. Unfortunately the protesters haven't done themselves any favors by escalating or dragging this on as long as they have, and now it seems there's a lot of Canadians who agree with the Cons, influenced by Postmedia push polls and CTV/Globe propaganda. I'm surprised to see Coyne be the level-headed one calling for cooler heads to prevail, but I'm sure he's another broken clock who will go back to being wrong just like Charles Adler. If this is how they reacted to the protests, then I'm almost afraid to see what might happen once coronavirus starts to spread. And already I'm seeing it start.

Just today I saw a bunch of mouthbreathers commenting on Justin Trudeau's Twitter feed saying they hope Didi gets sick and dies of the disease, after Justin wished his little boy happy birthday. Tomorrow is the anniversary of Pierre's retirement in 1984, and they are all over the various boards saying they not only want Justin to take a literal walk in the snow but get run over by a train or a plow or clobbered by an avalanche like his younger brother did. I see Reddit, Twitter and FB threads full of racists who want to quarantine patients on Indian reserves, and conspiracy theories that "Chinese smallpox" is part of the "United Nations reconciliation plan" to genocide whites to appease the "restless natives." So now they're fearmongering about UNDRIP, China, and Jean Chretien's brother. The Greta decal, the train decal, the "truck running over Trudeau" decal. All of it so horrific it prompted a motion in the HoC to condemn stickers on cars. Which has prompted howls from the base about freedom of speech and political correctness. Dare I say "because it's 2016"?

But according to the Big Lie Narrative, Trudeau is the one who is failing, he's weak, he's unfit to govern, and he has left Canada broken? What bullshit. I hope to God this ends soon, because I shudder to think of what either MacKay or O'Toole would have at their disposal with a cabal of thug premiers and a riled-up populist army on their side. Go look at Modi's pogroms and remember that he is BFF with Harper through the IDU. That's all you need to know about who this party is and what they would do at home.

Judas W-R is extending her 15 minutes on Charles Adderall's show tonight and lo and behold, his good buddy Wornout has signed onto the War Room and plans to run his own Buffalo bullshit blog from Ontario. God, these dope fiends will hire any desperate hack to keep the spice flowing, won't they?

If the Liberals had come up with such a poor collection of candidate the MSM would have been all over them. But the media hasn't even looked at some of the social conservative candidates even though they will determine the winner as they did for Scheer and Doug Ford. It.'s scandalous.

I like the way you compared those two mice fighting to Peter MacKay and Erin O'Toole. But if those rodents were really Cons shouldn't they be rats? Mice can be annoying, but rats like Cons can spread diseases and kill entire societies

"You could count on one hand the ministers in his cabinet who had any real reason to be there other than slavish personal loyalty to the leader."
Coyne coined that phrase well, so to speak. These clowns aren't fit to work a flea circus let alone run a country. Their daily ritual during dear leader's reign was jockeying for position to see who could plant the biggest kiss on Steve's pasty, white ass. They were mere bobbleheads doing their master's dirty work and along the way they lost all self respect and any ability to think for themselves. They are Harper's toxic legacy. Rudderless morons who's only skill set is at self enrichment, attacking perceived enemies and as a "leader", surrounding themselves with mindless bobbleheads, just like papa Harper did.
It's no wonder that anybody of any substance would want to lead the Harper party of repugnant wannabes. The stain that he left behind will take at least a generation to erase, if at all and it would be far easier to just euthanize this sick puppy and start anew with fresh, unifying ideas and a return to civilized politics.
JD

Dump enough political sewage into the water and its only the bottom feeders, self absorbed narcissist or fearless mice that want to wallow in it. Oh well, declare it broken and pass a law to fix it. Its the Con way!

I get asks for money all the time from all three parties. I say no, why. Why do they need money. Lets ban political adds and save the taxpayers billions in write offs.

I don't like rats. Could someone on this board do us Statesiders a favor and send a message to Gerry and Sophie? Ask Gerry if he would let us borrow Bianca Butts for president instead. And if Sophie and Didi don't mind could we have Cotton Trudeau for VP?

Hi Jackie....The Cons may be screeching and wailing, but they aren't going anywhere in a hurry. Most Canadians are divided on the native issue, so while some are angry about the rail blockades, Trudeau is still seen to be the only leader who can avoid a bloodbath. I don't think the Cons realize how demoralized their rabid base is becoming, and how much they stand to lose by trying to court them. Time is moving on and the Cons are slowly dying....

Hi anon....I agree with you. If the Liberals had such a pathetic collection of candidates, the Con media would be suggesting the party was on its last legs. But don't worry about the social conservatives, they will serve us handsomely in the weeks and months ahead...

Hi anon....As soon as I saw that great picture, I couldn't help thinking of the Cons. But you're right, maybe the mice are just small rats. Cons are creatures who are happiest living in sewers, and what this country needs is better pest control...☠

Hi Jackie....I must say Coyne has improved exponentially since he left Postmedia. And he's right to criticize the slavish personal loyalty to their fall end leader. I saw a picture of Stephen Harper shaking hands with Dumbo MacKay the other day, and it looked like MacKay was ready to drop to his knees and start polishing Great Leader's shoes. They are as you say Harper's toxic legacy, and only a clean break, and a lot of Lysol can save them...

Hi RT...Yes, the Cons seem to have forgotten that the more garbage they fling at their opponents will eventually have a majority of Canadians associating that garbage with them. They are filthy creatures and only if they are dismembered and put together again can save them from the hellish place where they are going...

Hi Steve....parties need money to survive, but the Cons are finding ways to cheat and progressives need to find ways to expose their crimes against democracy.....