Now Can We Call The Cons The Levant Party? 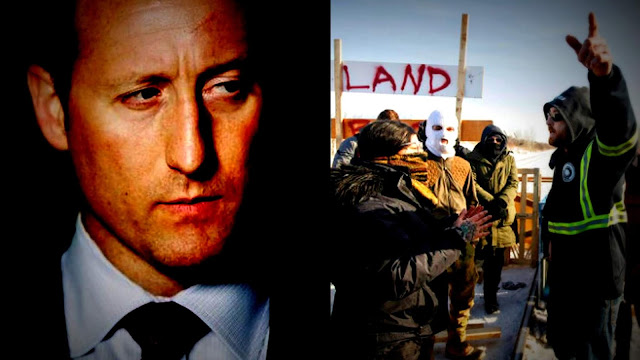 In my last post, I looked at how Peter MacKay tweeted his support for far-right vigilantes who dismantled a blockade near Edmonton.

Only to hastily delete it.

But by then it was too late, it had gone viral. 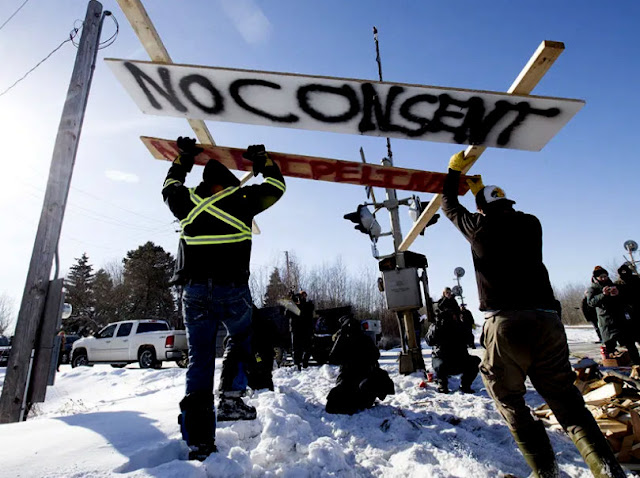 And where those yellow bellies went, others are now planning to follow.

There has been an uptick in online calls for vigilante action against Wet’suwet’en solidarity protests among hate groups and far-right activists, the Canadian Anti-Hate Network says.

Evan Balgord, a researcher with the network, says the protests in support of Wet’suwet’en heredity chiefs are the “number one” topic of conversation among hate groups and far-right fringe groups online, with many calling for violence to remove the protesters.

So needless to say, the grotesque bigot Ezra Levant has been quick to see a hate mongering opportunity... 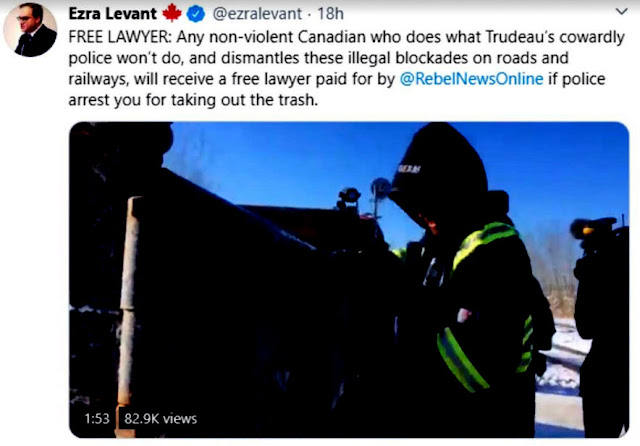 And has jumped on MacKay's vigilante bandwagon.

Which must surely lead to an awkward question:

Are the Cons now the Levant Party?

Or are they the Party of the Apes? 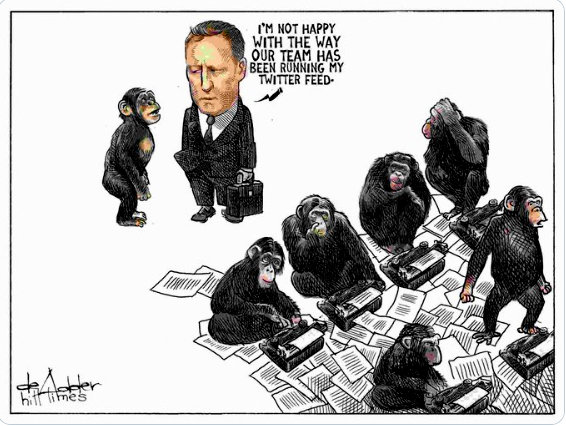 I must admit I don't know the answer, although I suspect they're a bit of both.

But what I do know for sure, is that they are no longer a truly Canadian party.

And no decent person could possibly vote for them...

I'm surprised he hasn't called Trudeau "Pocahontas" or made cracks about doing yoga with "Indians with a feather instead of a dot." Macho Mac McTrump sees racist dog whistling and a "tough on crime" attitude as his path to victory, while portraying Trudeau as sensitive, indecisive and a "race traitor." I worry that he may actually have one. What is clear is that the blockades need to come down ASAP and the tribe take Trudeau's good-faith olive branch, otherwise tensions are going to escalate, their movement backfire, and all of Canada suffer, the indigenous people most of all. Violence may break out and voters may flock to a tough-on-crime strongman as their alternative for snuffing out the restless natives, sweeping history under the rug, and making the trains run on time.

Industry is a lot more patient than the everyday Joe Molson. They know they can afford to wait out the "nice guy" in favor of a suit-and-tie fascist, which is why Hulk Horgan and CGL are not going to budge. Every CN worker laid off, every salaried employee made late for work because "the damn Injuns" is a potential new Conservative voter. Which of course is the fat cats' plan, divide and conquer, especially when it comes to pitting the exploited white precariat against a vocal ethnic minority. But it's worked for them before, so they're betting it will again.

The tribe does not have a winning hand to play in the long term. They may not have elections, but the rest of Canada does. Patience will quickly wear thin and there is money to be made. White capital always wins. It's as much a law of physics as every action having an equal and opposite reaction. The pendulum in this case being a wrecking ball that could get a lot of people hurt. Fortunately, there is still a window to halt or slow the momentum, but it won't be there forever.

The chiefs need to sit down with Trudeau and/or his representatives sooner rather than later, otherwise they may not get another chance, and the consequences would be ugly. As I mentioned earlier, Pistol Pete Pinochet would love to send them on a helicopter ride, and he obviously has people who agree with him. Levant is as odious as all Cons are, but a tinder box situation such as this has the potential to tap into something dark in the national psyche. Look no further than Brexit or Trump and you'll find that gambling on the "decency" of inconvenienced white people is a really shaky bet.

Given the fact that the cowards McKay, Scheer and Levant have whipped up their deplorables into vigilanteeism with their dangerously irresponsible rhetoric, it's time that whoever the fuck is responsible for ending this, ends it, NOW!!!! Whether it's JT or the provinces, the blockades have to be removed before someone gets killed. It's now an extremely serious public safety issue and if it's allowed to go on, it will not end well. It wont be pretty but it's a far cry better to be removed by handcuffs(if needed) than to be removed by ambulance, or hearse.
JD

This is all on the premiers and CGL, passing the buck and shifting the blame to Trudeau. Horgan will not budge on the permits, Singh prefers to score points instead of calling out the obstructionism in his own party, and Doug is AWOL as usual. When Chris fucking Selley smells the whiff of bullshit coming out of Queen's Park, you know there's a Con job going on. Even Andrew Coyne, for god sakes, is defending the cousin he despises. Something is wrong and the Cons have gone rogue.

Read this thread. I love Sunnshiiny's threads because they are brilliant. Kenney ignited this fire when he invested Alberta pensions into CGL, and CGL kicked the hornet's nest at the Wet'suwet'en camp. They planned for these protests and timed them strategically for the UNSC trip. The cruelty is the point and the target is Trudeau.

This article is a must-read too. Everything with Cons is projection including their bullshit about "foreign-funded radicals." When actually this entire operation is part of a coordinated soft regime change effort aimed at Justin Trudeau and the Liberal government. Coming from where, you might ask? Who else but the USA. Apparently KKR stands for Kenney Kudatah Revenue. David Petraeus or Betray-Us ring a bell? I seem to recall he was part of some other "mission accomplished" to occupy and colonize restless natives somewhere else.

With Harper and the IDU lurking in the near distance, I wouldn't at all be surprised if Blackwater got involved. The $$$ has spoken. They want Trudeau turfed and discredited, and UNDRIP sabotaged and rubbished, before he gets a chance to give the indigenous people a real seat at the table. What hurts the most is that the tribe is playing right into their oil-stained, blood-soaked hands!!!

Too bad we're all too polite. When they talk of treason and hanging the PM, it's fun to play "if I thought like a con", and charge the signatories to the Buffalo manifesto with treason, and if found guilty they should be executed in Quebec. The distinct society had distinct methods of capital punishment, which would result in the traitor's head becoming distinct from the their body.

Soooo... Justin has drawn a line in the sand after a week of fruitless round-the-clock negotiating and demanded an end to the blockades, putting responsibility upon the police to "do their job" and the chiefs to shit or get off the pot. In response, the demonstrators have only dug in their heels. That means arrests and further clashes will probably start happening soon.

Going to be an ugly weekend and an even uglier rest of the month (year?), especially as it looks like Teck Frontier may be approved after the feds and AB struck a hard bargain. The outsized symbolism of the latter is pointless because the mine will probably never get built. But no one, and I mean no one, is ever going to be happy.

The problem is even if the blockades are forcibly cleared, this is only the beginning of what could be a steadily drawn out crisis. That's because this isn't even about the tribe itself anymore. It's a color revolution across Canada with the aim of "dismantling the settler state" and it's being poorly administered. Justin warned them not to play hardball and let their movement be hijacked by bad-faith external actors who didn't have their best interests in mind. Now the tide has turned against them.

Wait until the food shortages start. This won't be pretty. But it could have been averted if they had only agreed to come to the table. No reason for this whatsoever.

As a result of this mess, UNDRIP is now shelved because it's become radioactive. Perhaps he will tear up this and the Buffalo manifesto at a press conference the way Nancy Pelosi shredded Trump's speech, and really, I don't blame him. He has done so much for the FNs and for Alberta alike, and this is the thanks he gets.

Amid all this, the chatterati of the press gallery has started pontificating that maybe Justin has grown to not like his job. Ya think? I have no idea where he'll go from this point, but I can't imagine he's too happy with any of this sabotage. Perhaps if he did have a little thought balloon over his head it would say the following: Après moi, le déluge.

The Wexit'wet'en chiefs as I'm going to just come right out and call them -- because unlike decent Albertans who want no part of Rempel or Kenney's buffalo excrement, they're showing themselves to be a squeaky-wheel splinter group giving other indigenous people (including those in their own tribe) a bad name -- are no better. They are dicking around, and now they're outright lying and gaslighting the public. Trudeau is right. One side is coming to the table in good faith while the other keeps moving the goalposts and inviting chaos. Saboteurs.

Chief Na’Moks told Global News Radio CKNW Friday that he and the other four hereditary chiefs opposed to the Coastal GasLink pipeline project were speaking by phone with Crown–Indigenous Relations Minister Carolyn Bennett and Indigenous Services Minister Marc Miller, and had agreed to a meeting set for Monday.

But around the time the chiefs and ministers were speaking, he says Trudeau gave his press conference, in which he called for the blockades to come down.

Bennett was at Trudeau’s press conference, standing behind the prime minister as he spoke — despite Na’Moks claiming she, Miller and the chiefs were in the middle of discussions when Trudeau began speaking.

The Ministry of Crown–Indigenous Relations has not confirmed that any phone discussion took place between Bennett and the chiefs. Global News has requested comment.

How could Bennett have been on the phone with the chief when she was standing right there on TV? I'm sorry to keep clogging up the comments section but this group is beyond sympathy at this point. #NotAllIndigenous just this group. They just want control and to turn the tables in revenge. I'm glad to see that Justin Trudeau has zero fucks to give anymore. They have hurt their own people and harmed the cause with their antics. They are playing right into the Cons' hands and attacking the one prime minister who actually gave a damn to try and extend an olive branch in the first place even though nothing about this mess falls within his jurisdiction. The company, its shady financial backers, and the premiers may have gotten the ball rolling, but the HCs have absolutely shit the bed on negotiations and, like JWR, have likely set back the cause of reconciliation for decades. It takes two to tango, and they keep stepping on Trudeau's feet. About time he kicks them in the shins and walks off the dance floor.

Trudeau and his team have done more than enough for this group. Now this guy has the fucking gall to spit in their faces and lie through his teeth on a national broadcast. What is so absolutely tragic about this whole thing, and one of the points that Trudeau kept bringing up in the presser, is that these bad apples on a power trip have ended up spoiling the whole project for everybody else. Well, now they deserve nothing but a Fuddle Duddle Salute.

You will pry my Teslsa from cold dead arms