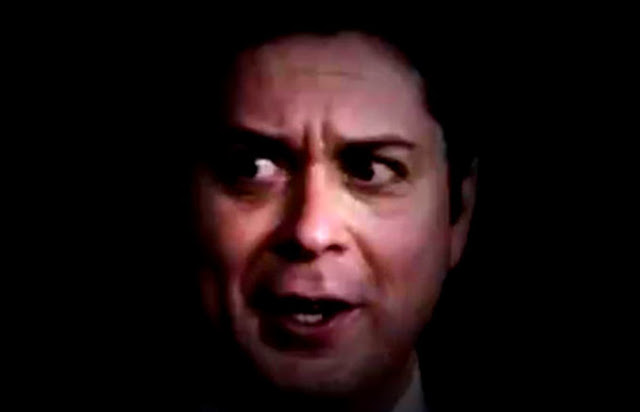 As you may know, I have always been deeply concerned about Andrew Scheer's mental stability.

His creepy smile, his religious extremism, his feverish obsession with Justin Trudeau, and his compulsive desire to strangle the truth, always made me wonder whether he was going off the deep end.

And sure enough, I truly believe he finally has.

And it all started on the night he was defeated and humiliated by the man he hates so much. 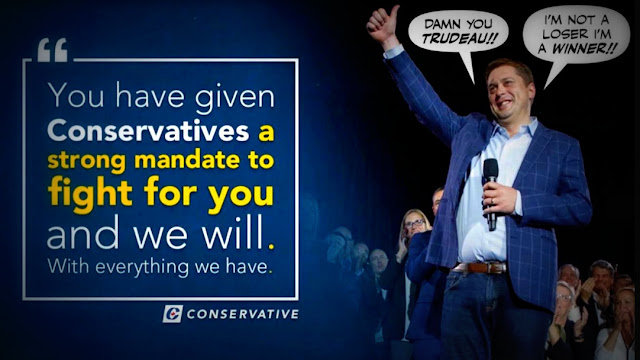 When he started suggesting that he was the REAL winner.

But what's even more disturbing is that the Ugly American also seems to be harbouring the dark delusion that he could be the winner of the NEXT election, if he can bring down the government before the Con leadership convention in June.

For although Scheer has withdrawn this non-confidence motion.

The Conservatives are backing away from a potential attempt to bring down the Liberal minority, just 20 sitting days into the new Parliament.

He has made sure it can be tabled at a moment's notice.

Because the Conservatives have now given notice of the non-confidence motion—which simply states "that the House has lost confidence in the government"—they have the ability to table it at any point this Parliament.

And although it won't be easy to catch the Liberals with their pants down, as the Cons tried to do recently, forcing Trudeau and his MPs to race back to the House of Commons. And even harder to get the NDP and the Bloc to support him.

So I wouldn't be surprised if this attack ad accurately reflects Scheer's state of mind....


And in my opinion this latest bizarre ad is even more evidence that he is losing his marbles.

Why is the CBC acting like capitalism is a bad thing? The CBC posted an article quoting a university professor who argued the children’s TV show, Paw Patrol, encourages children to embrace capitalism.
Free market capitalism built our country. So lets celebrate it, not condemn it! pic.twitter.com/hp3GTTd0ZT
— Andrew Scheer (@AndrewScheer) February 23, 2020


Can you believe that? What Paw Patrol character is he trying to be?

The good Cap'n Turbot or the evil Mayor Humdinger? 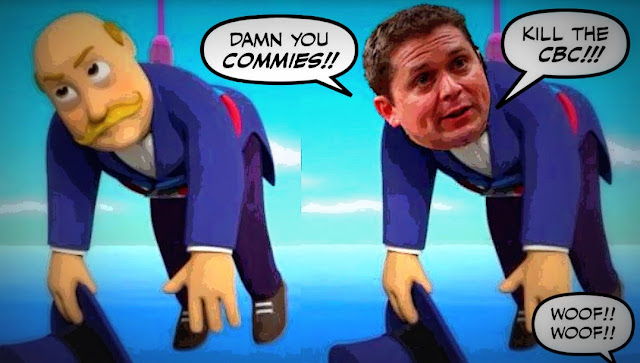 And has his bitterness driven him to drink? 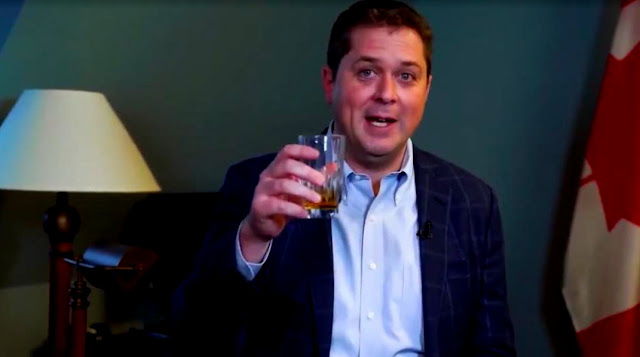 Who knows, but I did have this to say on Twitter:

And I enjoyed what others had to say as well. 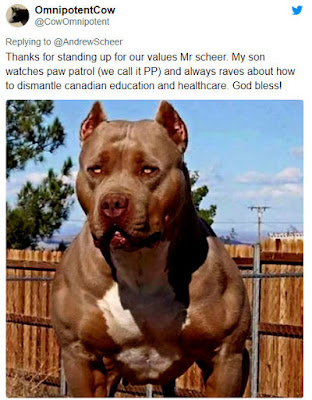 They're laughing at him all over the country... 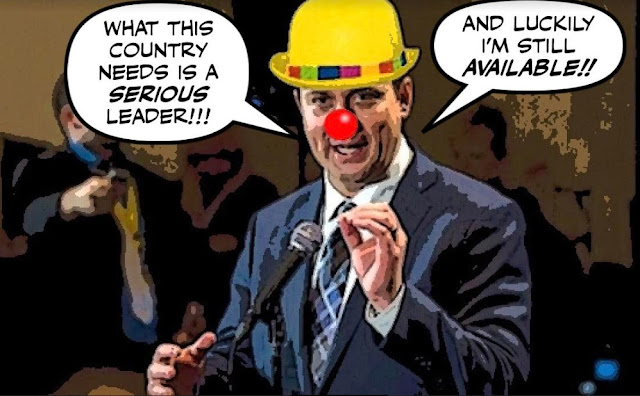 The Con's decision to let him remain as their leader is promising to be one of the worst decisions they ever made.

And with a little bit of luck, that ghastly clown will take them all down with him...

So apparently the Cons have reached the point of Trudeau-family derangement syndrome, as Paw Patrol is Hadrien's favorite show. Recall when their mouthbreathing trolls made fun of his Halloween costume, subhuman scum that they are. With the Ontario teachers rising up against Dug I'm guessing the Trudeau kids are home from school, so perhaps Didi's dad could take a much-needed day off from babysitting the Con children and his boy fill in at QP. Weak Andy couldn't win a non-confidence vote against him either. No ego too big, no mind too small.

Scheer must be hitting the bottle pretty hard since his humiliating defeat and now he seems determined to empty Stornoway's vast liquor cabinet before the doors of said Stornoway close on him for one last time. And that's what hurts the most when these Con assholes like Scheer lose their entitlements. They love their five star ways when us taxpaying suckers are paying for it and grow bitter and twisted when they lose them and/or get caught with their hands in the cookie jar. And yes, he's not playing with a full bag of marbles, Simon. Defeat has led him to near madness as he's taken his usual nonsense to a new level and is now worse than what led him to defeat. It's like a coach asking the team, "why did we lose?" And following up with, "well, let's do it again!" Keep up the great work Coach Andy. In my eyes you will always be the worst prime minister we never had.
JD

Good. I hope he does force the government down. I don't know how he could do it, but I am very, very sure if Trudeau could figure out a blameless way to re-fight the election against Scheer that it would put the Conservatives away for good.

It seems clear to me that Andrew Scheer's crush on Justin Trudeau has made him unwell. Why are the Cons allowing him to make them look bad, have they also lost their minds?

I despise this man. I bet he yanked it to the photos but can't admit it to himself.

This being #BlackHistoryMonth Andrew Scheer makes his contribution by saying

"We all know Justin Trudeau is a teacher. We've all seen his picture in the yearbook."

Piece of shit. And he's currently leading in the polls -- having gained off the Greens, Bloc and NDP! -- because there's a disturbing number of Canadians who are just as racist as he is.

Sometimes I wonder why Trudeau even bothers. Politics is a filthy business that seems a natural fit for gutter punks like Scheer.

Hi Jackie...I didn't know that Paw Patrol is Hadrien Trudeau's favourite show. But it does explain why Scheer chose to bring it up. His hatred for Trudeau and his family has always verged on the homicidal. And of course it is one more reason the Cons must never govern this country again...l

HI JD....I don't know what's in that glass, for all I know the Ugly American might be so crazed he could be drinking his own urine. But you're right, defeat has made him crazier than ever, and the acorns should be ashamed of themselves for letting him continue to be their leader. And they are going to pay for that...

Funny, I thought Pet Patrol was about rescue dogs.

Hi Sixth Estate..l. Feel like you do, if Scheer wants an election he should definitely get one. And you're right, if we can brand the Cons as the Scheer Party, they'll be dead for at least a generation...

Hi anon @1:26 PM...I have no idea why Scheer is acting so weird, and only his psychiatrist knows for sure. But you're right, he is doing great damage to the Con brand, and I suppose for that we should be grateful....

Hi Jackie....I wouldn't worry about that poll. Some Canadians are just frustrated and others are racists. But most of them are still not crazy enough to vote for Andrew Scheer....