The Ugly Cons and the Shadow of the Vigilante 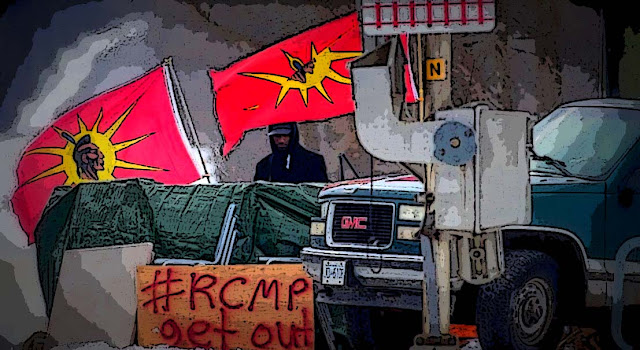 The barricades are still up, the ugly Cons are still howling for native blood.

And a lot of people all over the country are impatient and angry.

But Justin Trudeau's decision to rely on the Canadian values of negotiation and compromise seems to be working.

Public Safety Minister Bill Blair says he's hoping the RCMP's offer to leave their outpost on Wet'suwet'en territory in northern B.C. will lead to the barricades coming down, as talks aimed at ending the rail blockades crippling the country's rail network continue.

And just in the nick of time, for some angry white Cons are trying to take the law into their own hands.


CN police have served a court order to the blockade near Edmonton to leave. At the same time, a crew of angry locals showed up and started dismantling the camp. Not cops, locals. #cdnpoli #abpoli https://t.co/ZimrDLFCFe
— Justin Giovannetti (@justinCgio) February 19, 2020

Very tense. A man is trying to take away the blockade, calling it litter. Some profanity in video. #Wetsuweten #yeg pic.twitter.com/fQMnFOozY2
— Carly Robinson (@CarlyDRobinson) February 19, 2020

As you can see it's an ugly situation, and one that could very easily lead to violence.

But what makes it even uglier is that Peter MacKay is encouraging this vigilante behaviour. 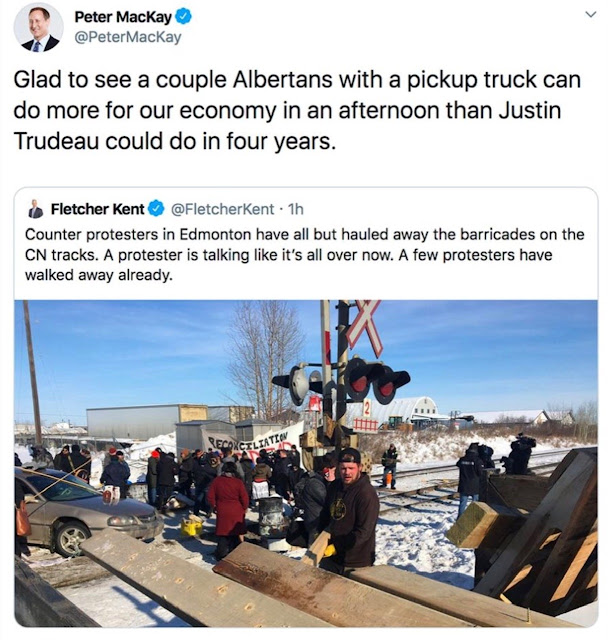 Or should I say he WAS.

For when I and others on Twitter sounded the alarm last night, the cowardly MacKay quickly deleted that toxic tweet.

Conservative leadership candidate Peter MacKay has deleted and replaced a tweet that praised the actions of “counter protestors” who tried to clear a blockade on CN tracks in Edmonton.

And replaced it with a series of tweets where he praised that vigilante behaviour as an "act of good citizenship."

“The peaceful removal of debris deliberately placed on railway that posed a threat to public safety. Clearing the track and preventing harm,” Mr. MacKay said, adding he stands with “the workers, producers and suppliers who work hard, obey the law, care for their neighbours and keep Canada the best place in the world to live.”

Which is of course why they call him Dumbo eh?

And needless to say it didn't change what I think about him:

Or what I think about  Erin "True Blue" O'Toole... 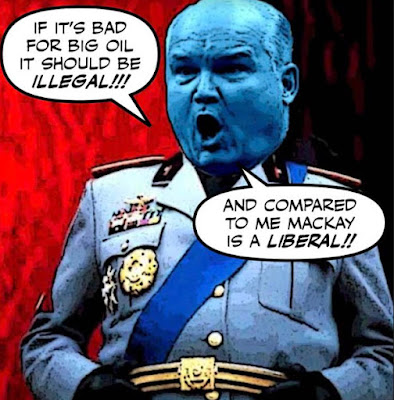 Another Conservative leadership candidate, MP Erin O’Toole, announced on Thursday that as prime minister, he would remove the need for an injunction before police can clear a blockade and issue a general directive to police to “clear blockades as soon as possible.”

“We will stand firm for the rule of law. We will fight for Canadian workers and their jobs that have been put at risk by illegal blockaders. We will stand up to eco-extremists, foreign-funded misinformation and protect Canada’s economy,” Mr. O’Toole said in a statement.

For we know who he is, and what kind of people those yellow vested vigilantes are... 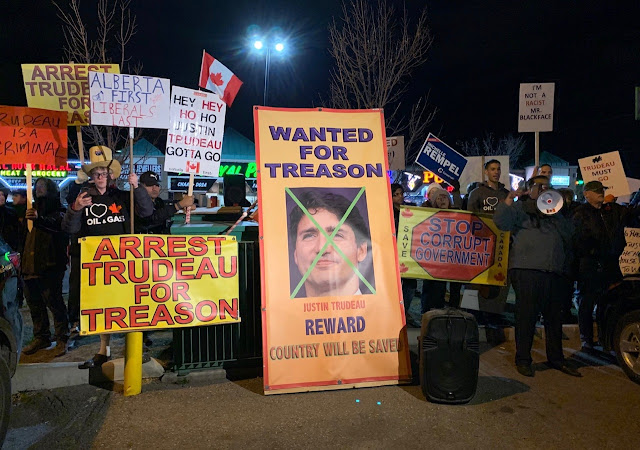 We also now know that the Cons are a far-right extremist party, more American than Canadian.

We know that they are willing to set this country on fire for crass political purposes.

And all I can say is thank goodness for Justin Trudeau... 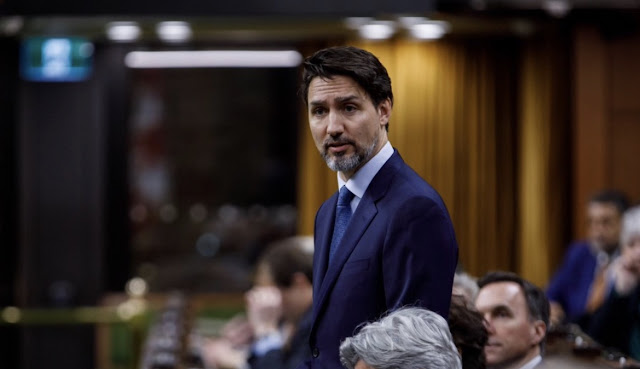 Who is standing up to the racist Cons and the filthy mob.

And by holding out for a peaceful resolution is standing up for our country and its precious values...

Sad and crass, what if a bunch of taxpers had burned down his cardboard F35 would airshow be saying we can defeat the Russians with a bic lighter?

The worrisome thing I find about all of this is that no one really seems to know what exactly a "resolution" will look like, other than dick-swinging thugs like Macho Mac and the Tool for whom the ultimate answer or "final solution" means blood on soil and the trains running on time. I understand the natives' concerns, but if they start to feel emboldened by the blockades and escalate their demands despite good-faith attempts by Trudeau and his team to pursue peaceful negotiation, it could backfire and either topple the government in a backlash, lead to violence, or both. Climate change and inequality are important issues, but if they let their movement get hijacked by well-meaning but disruptive external organizations that don't have their eyes on the prize or their best interests in mind, it won't lead to a good outcome for anyone. The indigenous peoples least of all.

I was really disappointed to find that some of the Mohawk chiefs were trying to expel one of their own when he called for the blockades to be dismantled, that a Wet'suwet'en spokesperson is already casting doubt on the RCMP's plan to withdraw while declaring that other nice-sounding but unrealistic items (such as the cancellation of CGL and the RCMP facing an external inquiry or Nuremberg trial due to historical and ongoing abuse of the native peoples) are non-negotiable, and that their press conference earlier today had brought in David Suzuki and members of assorted NGOs to rattle off academic talking points about late-stage capitalism. Pun intended, that just adds fuel to the Con-spiracy theorists' fire. As Jon Stewart was fond of saying to misguided individuals whose efforts posed a risk of undermining the liberal cause, "You're not helping." I hate to say it but Mr. Suzuki and even Ms. Thunberg need to butt out.

But I'm not sure the protesters understand that while Trudeau and the Liberals aren't perfect on this file, they are a lot better than what would happen under a Con government led by Scheer, MacKay or O'Toole. Realistically, this can't go on forever, and while I see a lot of ostensibly well-meaning progressives invoking the U.S. civil rights movement as a model (even citing opinion polls of the era showing a similarly low level of public support), they would also do well to remember that the electoral result of Dr. King's marches and the concurrent and subsequent race riots was Richard Nixon's "tough on crime" election in 1968. Just like Black Lives Matter led to a "whitelash" and Donald Trump. Progress comes in fits and starts, while an all-or-nothing approach usually results with nothing. It sucks and it isn't fair but you go to war with the army you have. To be blunt, don't kick your best allies over to the opposition benches by pissing the rest of the country off.

Justin Trudeau is working. Chrystia Freeland is working. Marc Miller is working. Carolyn Bennett is working. Bill Blair is working. I realize that I'm not in a position to impose a timeline upon the indigenous protesters who are clearly at a breaking point having suffered for hundreds of years. All I am hoping for is that they recognize a sincere effort at progress is being made, that hundreds of years of oppression can't be solved in 5, and that the worst outcome for all involved would be for this good-faith government to get thrown out. There is a limit to what the general populace will tolerate, and the protesters would do well to come to the table to reach a peaceable compromise. Justin Trudeau might operate a slow-moving mystery machine, but despite some detours and rest stops, it's moving in the right direction. Peter MacKay, meanwhile, has already proven he would send anyone he doesn't like on a Pinochet helicopter ride.

The conflict over the pipeline route has been brewing for years and should never have gone this far but it has and resulted in BC imposing a rule of law solution. The solution did not work and resulted in country wide rail blockades. In true Con fashion their obvious move is to impose federal rule of law. The protesters then have three choices 1) go home 2) go to jail or 3) up the ante. Perhaps option 1) or 2) would be the outcome resulting in a festering more divided future or perhaps they would choose to up the ante. Its not necessary to describe how this option would play out as history is full of illustrative examples but suffice to say the physical suffering of innocents is usually involved. Stupid Cons, can't even manage a conflict that is open to deescalation through negotiation much less run a country.

But if the tribe wants a peaceable and mutually appreciable outcome, the chiefs need to meet the government halfway and at least break the ice, otherwise the rest of the country will get fed up and elect a Con government that does send in the troops to go crack skulls. They are stonewalling, playing hardball and it won't work in their favor. They won't talk to Bennett or Miller. They're not answering any phone calls. They only want to meet with Trudeau and Horgan directly (the "chiefs"), and yet they won't meet with Trudeau and Horgan directly unless other demands are met. Horgan has said no to revoking the construction permits. CGL is not Trudeau's decision one way or the other, and he cannot trample upon provincial matters any more than he can issue directives to the police. Singh keeps making noises and antagonizing progressives over something that Trudeau can't do. All the while ignoring his own boy in B.C. After the shitshow that went down this time last year over merely seeking an explanation from Judge Jody the Executioner, can you imagine the outcry that would ensue if Trudeau actually did needle Lametti to finagle around the court decision that gave CGL the green light?

People are getting impatient and the protesters are being unnecessarily stubborn and shooting themselves in the foot. There will not be an inquiry into the RCMP's actions. They are not going to have a country designated on the map. Perhaps most significantly, CGL is not going to cease operations. But Justin Trudeau is the one getting blamed and being called to fix something that the B.C. government and the pipeline developers fucked up. None of this is realistic and unless somebody blinks, this whole thing is going to backfire horribly and it won't be pretty. Someone show them Toolio and Mac Daddy's tweets and that asinine Buffalo Manifesto that Drunk Rempel and Wexit Brexit Wilson just spewed out. It makes a disgusting mockery of their long and arduous fight for land title. "Nation to nation dialogue with the distinct culture of Alberta." Sick. Do the hereditary chiefs really think they would get anywhere with these racist crackpots in charge?

Justin Trudeau is trying. He is putting his career on the line and his entire heart into finding a solution, but a dialogue can't be a soliloquy, and right now he's only talking to himself because the answering machine on the other end has been disconnected. Do the Wet'suwet'en have any idea what they are putting at risk? Or are they accelerationists looking to collapse conditions in Canada to an intolerable fascist nadir so they can have a revolution? I understand they are desperate and pushed to the brink, but realistically, what exactly do they think is likely to be the end game here?

Anti-indigenous racism was already a problem before these latest protests so MacKay has shown himself to be a low and cowardly bigot. Any other party would have asked him to resign but the Cons are the scumbag party so they don't care.