Why Don Cherry's Firing Is Good For Hockey and Canada 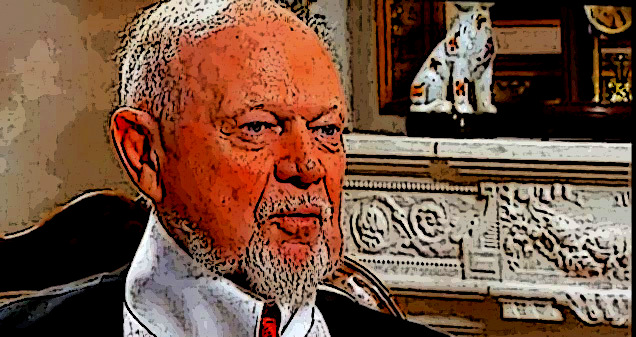 “I could’ve stayed on if I wanted to and knuckled under, and turned into a simp, but that’s not my style,” Cherry said Monday night in an interview with Toronto radio station Newstalk 1010.

Cherry stands by his remarks. “That’s the way I feel and I’m not changing it and I don’t regret a thing,” he said on Newstalk 1010.

He actually said the other day that Canada hadn't changed, when the problem is it has, and he hasn't.

So this is outrageous. 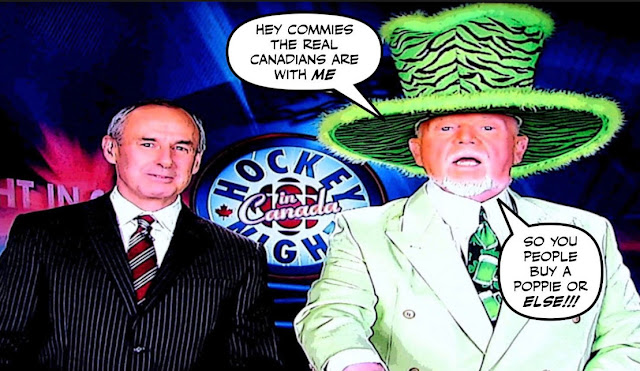 Don Cherry says he is sorry if his "you people" rant about poppies on "Hockey Night in Canada" hurt anyone but he believes the silent majority backs him.

And that these ugly words weren't aimed at immigrants.

"You people … that come here, whatever it is, you love our way of life, you love our milk and honey, at least you can pay a couple bucks for a poppy or something like that," he said.

When of course they were, and Cherry's supporters are not a silent majority they are a loud MINORITY.

But what makes all of this even more disturbing, is that some of those supporters include some of the ugliest Cons and racists in Canada.

And these two Con clowns and many others following closely behind.

Ar least until the Legion put out this message:

And all hell broke loose.

Don Cherry supporters commemorated Remembrance Day this year by denouncing the Royal Canadian Legion after the veterans’ organization disavowed itself of Cherry’s “hurtful” and “divisive” views on immigrants.

Some even suggested they will stop buying poppies on Remembrance Day altogether to show their solidarity with the disgraced broadcaster.

Which tells us who those ugly Cons are, and reminds us again why Cherry's long overdue firing was good for hockey, and Canada.

The decision by Rogers Sportsnet, which has owned HNIC for the past five years, to finally whistle down Cherry feels, indeed is, something that resonates far beyond the world of sports. It’s a sign that time is well and truly up for the kind of retrograde attitudes championed by Cherry and indulged first by the CBC and then by Sportsnet.

Overall, it was a good day for hockey. The sport claims it wants to be fully inclusive and reflect 21st-century Canada. But Don Cherry was a shouting, ranting symbol of all that is holding it back. It was an even better day for the country as a whole.

The day of the ugly old man spewing bigotry in every direction is over. Canada has moved on, and Cherry should fade to black.

For we need another loud Con demagogue trying to divide us.

Let me see ... they support Don Cherry and his views and they are going to show their support by NOT buying a poppy? Hmmm ....

Going on Tucker Carlson should be the end of his career. Then again, it didn't stop Michelle Rempel or Jordan Peterson, so clearly Canada has more work to do to clean house of these bottom-feeders. But again I want to apologize for the toxic American influence. Cherry may be a homegrown bigot, but it doesn't help that Fox News is now in the business of polishing his shoes and dry-cleaning his jackets. At least he won't be disgracing your airwaves anymore. He'll have to settle for Russia.

One Don ousted, one Donald to go

It's almost as if when you intentionally give populist shit-stirrers a platform it could backfire on you.

Rogers's problem isn't me or even Don, it's probably the man down the street from me. He is Sikh and a Canucks fan who wears his team jersey on game days. I'll confess the first time I did this I kind of did a double take and thought it was weird to see a Sikh hockey fan. Adjusting took me about a couple of minutes self-reflection on the narrowness of my small-town conservative background.

Apparently Sportsnet took only a few hours more time to adjust to reality than I did.

As for Don and his legions of fans, they probably never will.

Cherry was just expounding on a subset of the Harper attempt to rewrite Canadian history. Anything suggesting a multi cultural evolution over the past hundreds of years was trashed and replaced by the notion of a great warrior nation of fearless "old stock" Canadians who held the fascists and murderous communists at bay. Much of the rewrite was under the guise of budget cuts and departmental mergers but the ghastly monuments he promoted told the whole story. It was as if he could erase history by overwhelming it with monuments. Cherry is just a missionary waiting for the return of the great oily messiah.

As UU pointed out, for Cherry's "silent" majority of fans to urge people not to buy poppies shows it never was about our veterans for them. Demonizing minorities is what floats their boats and Cherry has always delivered for them. For him to use our veterans in such a manner is despicable and will be his lasting legacy. Good riddance!
JD

Leave it up to a stupid Liberal troll like you and your stupid troll brigade to assume that anyone who supports Cherry is a Con.

You people make me sick. He did not do anything wrong. It was not racist. The last time I checked we live in a free democratic society and entitled to voice our opinions freely. You can disagree all you want. " you people means in general talking to the people as a whole it in no way implies a certain group of ppl. The fact you are twisting this and insinuating your own interpretation to serve your own agenda is only proving your own bias and prejudices. For the record this has nothing to do with any political affiliation. I have never voted Conservative. One more thing Cherry is not Trump. He has never called Mexicans Rapists and did not refer to immigrants coming from " shit hole " countries