Why Don Cherry Should Be Fired Immediately 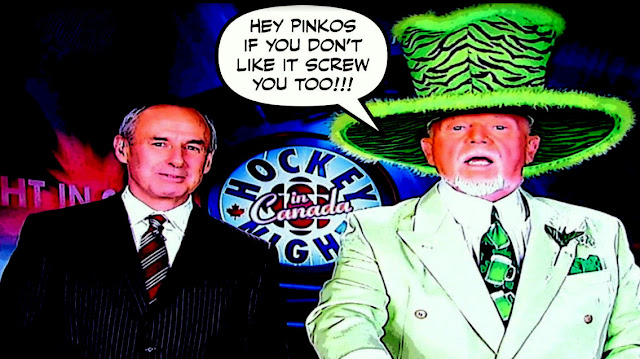 Don Cherry has always been a crass, loud mouthed bully and buffoon, and a terrible example for young Canadians.

He glorifies violence, he is a Trump groupie, he calls decent progressives "pinkos" and those who believe in climate change "cuckaloos."

But now he is suggesting that immigrants are less patriotic than other Canadians because he claims many don't wear poppies.

And enough is enough.


As Bruce Arthur writes, for Cherry it should be game over.

When he says “now you go to the small cities,” he’s saying more people wear poppies in smaller towns. And smaller Canadian towns, in general, are full of Anglo-Saxon white folks.

And when he says “good Canadians that bought a poppy,” he’s doing what he did when he cartoonishly separated players into good Canadian boys and chicken Swedes and soft old Russians, except this time he’s separating Canadians into good and bad people. And he’s doing it after addressing “you people … that come here, whatever it is.”

For not only is he insulting the legacy of many visible minorities who fought and died for Canada. 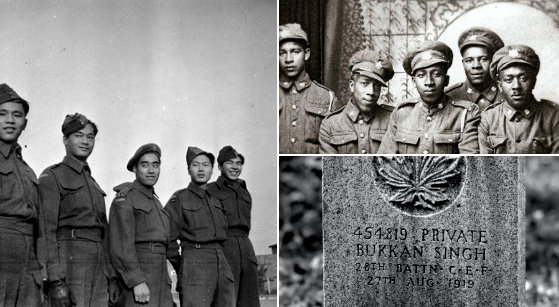 He's feeding a racism that is already a growing problem in this country.

The national number hovers around 40 per cent who say too many. But Conservative Party supporters who say too many immigrants are visible minorities has gone from 47 per cent in 2013 to 53 in 2015 to 69 per cent earlier this year. Cherry’s popularity says something about this country beyond the habits of Saturday night.

Don represents people who have always been suspicious of foreigners, especially the dark-skinned ones. The age has just caught up to him.

Don Cherry is still on TV, still saying what he thinks. He shouldn’t be. It should be over. But whenever it ends it will be a cultural battleground, a proxy war over Canada, and a part of it should be this: People often say hockey, and Canada, is for everyone. But the doddering old high priest of hockey keeps saying that isn’t true.

You know eight years ago I ran the following video to make fun of the crass buffoon.

But Don Cherry is not funny any longer, just toxic.

And if he won't play himself out, and retire.

That ghastly old Con should be fired as soon as possible...

BREAKING: Old man yells at clouds. Reminds me of the Republican outcry over Obama wearing or not wearing a flag pin. He'd be a better fit at Fox News, bloviating about Colin Kaepernick or women's soccer or whatever else the old-stock olds get their fix of angry adrenaline about before Matlock reruns and bed. Don't go away mad, Don, just go away.

Are you sure he isn't just a Frank mag joke like Dick Little .

Don Cherry is a bigot, full stop. Always has been, always will be.
But TV brass love him cuz he glues eyeballs to TV sets ($$$), at least those of a certain crowd.
And Ron McLean and Sportsnet are the ones apologizing, but not him!?! Their very lame excuse that he doesn't represent them doesn't cut either; he is nicely provided the soapbox by them despite his long history of similar conduct.
Cherry's unrepentant rant will only solidify the already bigoted and wrongful opinions of many Canadians regarding immigrants.
That he continues to have a national audience to spew his hatred is a shameful indictment of our society. In the entertainment world, like pretty much everywhere else, money is the only thing that matters nowadays. Sad indeed.
Old timer 44

If Derek Fildebrandt is any indication, it won't be long before we see a Rebel fundraising petition full of disingenuous whataboutery calling for Trudeau's head.

Way to miss the point.

Better late than never. So long to the bigot icon, Don. Now watch the cream of the racist's crop rise to the top to defend the buffoon. Show yourselves and be counted.
The irony of being fired on Remembrance Day will leave the old prick seething with rage. Enjoy, Donny.
JD

Cherry is a patriot and definitely should not be fired but unfortunately the country of Canada has morphed even farther into the abyss of PC . Please stay north of the border we already have enough libtards here in the states

Hi Jackie...I never used to miss a Habs game, but Cherry's Coach's Corner helped turn me off the game, with his incitement to violence and dismissals of the concussion problem. So as far as I'm concerned he should have been fired years ago...

Hi rumleyfips....Well I don't know if he's little, and I'd rather not find out. But he has been a monstrous asshole for as far as I can remember, and those who kept him on the air for so many years should be ashamed of themselves....

Hi Old timer....I completely agree with you. Cherry was, is, and will always be a bigot, and at a time like this one when racists are out of control, we need a guy like him like we need a hole in the head. And you're it was all about money. Cherry is said to be worth about $14 million so nobody should feel sorry for him...

Hi Jackie....Yes, the bigots at the Rebel already have a petition going, and are trying to turn the Cherry story into a fundraising opportunity. If there's one Canadian even lower that Cherry it's Ezra Levant....

Hi JD....It's unfortunate that Cherry's firing overshadowed Remembrance Day. But at least for a few years it will be easy to remember the day that Don Cherry went down. And yes, the Cons and other racists have been crawling out of the woodwork to celebrate the old bigot, and demand that Trudeau be fired. I think we can turn this into a teaching opportunity....😀

Hi Unknown....No Cherry is definitely not a patriot. He may qualify as one in your country, but in our country he is just a huge embarrassment who should have been fired long ago. So please, if you want him you can have him...

He might be going to some other country, Simon. Look who's a fan.

Gee, is it any wonder Vladimir Poutine might benefit in some way by weaponizing Canada's national pastime to influence an audience of primarily angry white conservative men?

When Russia and Faith Goldy are the main cheerleaders for your fan club, you really need to rethink your life...

Sorry to break it to you Jackie but a lot of Russians have a dry sense of humour. That job offer is a joke and a rather amusing one.

And we will make a nice suit! may be the give-away. :)