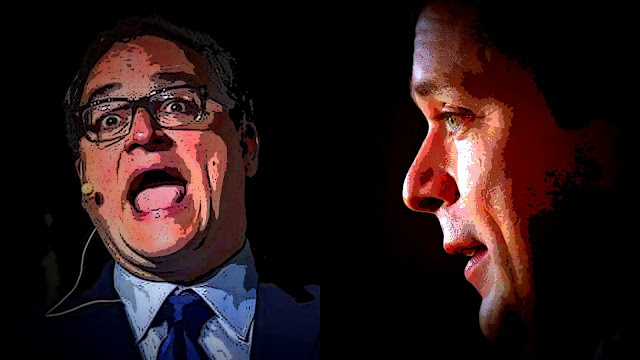 Earlier today I wrote a post demanding to know why Andrew Scheer was hesitating to condemn the white supremacist views of Ezra Levant's bigot Rebel.

After spending so much time riding on that stinking and sinking boat.

Well now it turns out he did say something about it in B.C. last night.

And not only was it four days late, it couldn't be more pathetic. 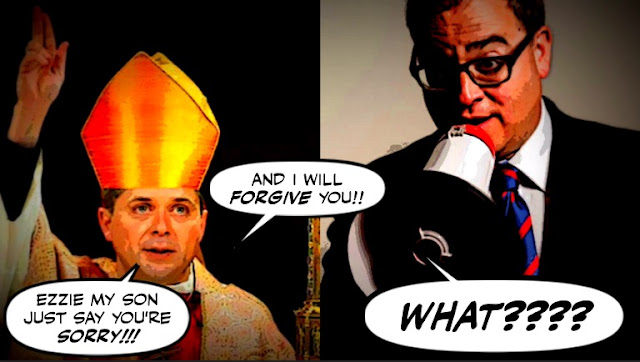 Conservative Leader Andrew Scheer won't grant further interviews to Rebel Media if the outlet's editorial direction remains "as it is," he said at an event for supporters in British Columbia on Wednesday evening.

"Like all Canadians I viewed the events of last weekend with a great deal of disgust [at] the types of vile comments that were being made by hate groups," Scheer said. "And I think there is a fine line between reporting the facts and giving some of those groups a platform or any kind of legitimacy.

"Anything that gives a platform to those types of obnoxious groups is certainly worth condemnation for sure."

For that's like giving a bigot a slap on the wrist...with a feather.

Especially after Scheer's grubby Cons have spent so much time at The Rebel, frolicking with those alt right freaks, or in Scheer's case even cavorting with the ghastly white supremacist Faith Goldy.

An analysis of the Rebel Media website by Press Progress reveals one-quarter of all Conservative MPs elected in 2015 have previously made appearances on the alt-right website.

That includes Conservative leader Andrew Scheer, a repeat guest of Rebel Media who gave one of his first interviews after winning the party's leadership to the alt-right website and even appeared on Goldy's show to criticize a non-binding motion condemning racism and Islamophobia.

The ghastly Goldy who thinks Scheer is "our people."

And all of those shameless Cons would, or should have known, that The Rebel has been a sewer of bigotry for a long time.

And that Ezra Levant has been a monstrous bigoted hog for as long as ANYONE can remember... 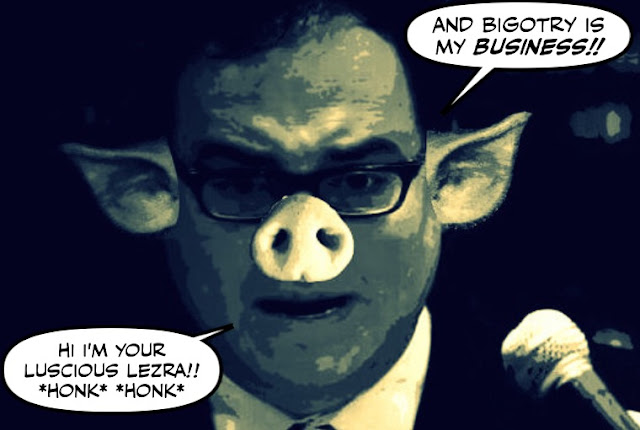 So does Scheer really think that the "editorial direction" of the ratty Rebel will ever change as long as Levant remains its leader or "Rebel Commander?"

Is he really THAT dumb?

But then it's not hard to figure out why Scheer is stroking Levant instead of condemning him.

He's a right-wing extremist himself and he knows that if he's too harsh, he could lose the support of his rabid base.

And judging by the reaction of some of them to the CBC story, he is already losing them.

He just lost my vote. Treat all news media equal, not just the fake ones. The Rebel tells it like it is, no lies and deception

Lost my vote.If this guy melts so easily over this issue, he's practically guaranteed to melt every time the Left says Boo! Another Trudeau we don't need.

Well...so much for Scheer. Absolute DUMB mistake! The ONLY media site in Canada fighting daily for freedom of speech and Canadians is the Rebel.

Which just goes to show that when you play with fire, you just might get burnt.

The alt-right Cons are caught between a rock and a hard place.

And The Rebel is still going to the place where it belongs... 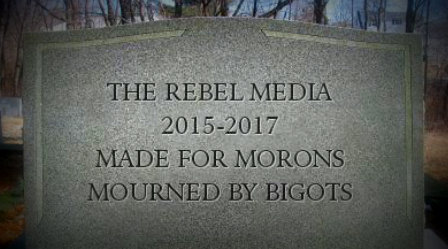 I got an Email petition from Leadnow, asking the Con's to disavow the Rebel, asking for my signature,

I told them no,

"So a Nazi and 9 of his friends walk into a bar,

The bartender say's "what the fuck are 10 Nazi's doing in my bar, get the fuck out".

No adult with any shred of a moral compass or any hint of empathy, would have anything to do with the Rebel, or have to be "told" not to hang out with Nazi's.

If the Con's want to wear the swastika in the next Election, I'll gladly point that out to fellow voters every chance I get.

"Like all Canadians I viewed the events of last weekend with a great deal of disgust [at] the types of vile comments that were being made by hate groups," Scheer said.
What about all the hate filled and threatening posts his beloved base has been directing at JT and his family and at Rachel Notley? A lot of which were posted on his beloved Rebel. I think we have a case of the shit hitting the fan syndrome here Simon.
Now that it's a huge news story he's been shamed into denouncing The Rebel but I assure you it has/will be short on substance and short lived.
When your professional existence depends on the support of these hateful bastards then you're either one of them, or a deplorable hypocrite. I think Sandy Garossino sums it up very well...

"Some other federal Tory MPs have started to distance themselves from the far right website this week. But the only thing that finally shocked them into shunning The Rebel was the sudden risk to their own political hides.
Someone should have told them that the best time to show your honour is before you sell it."
JD

hi Steve...well of course Ezra has all the bases covered, from Ethical Oil to white supremacism....

hi JD...as I said in my post, Scheer's comments on The Rebel were late, lame, and cowardly. The way so many Cons appeared on that bigot rag was absolutely disgusting and can't be forgiven. And the media deserves a share of the blame as well, for seeking to normalize Levant and his gang. I don't know how long I've been fighting Levant, but it's a long time, so needless to say I'm REALLY enjoying what's happening to The Rebel. My dad doesn't like me gloating, but I'm going to have to make an exception... ;)

hi e.a.f...thanks I'm glad you liked it. I've had my tombstone generator since the early days of the Harper regime, so I thought I should power it up again. The day I write Donald Trump's epitaph on it will be the day I finally retire it... ;)

didn't see the petition and why try to change the Cons. they made their decision about what direction they wanted to go. I'm not happy about it because their connection to the REBEL isn't going to get them more votes in the ethnic communities. It will be something other political parties use in future elections, perhaps not in big ads, but you know in all those e-mail campaigns. it will help those who would prefer to take the Cons back to the Reform days and then back to Heritage Front ideas but it won't be good for the overall politics in this country. For a democracy to work well it needs a variety of main stream political parties for them to vote for. If the Cons become too associated with bigots, etc. were do the true Conservatives/Progressive Conservatives go? its not my problem but it is a problem if everyone is to be happy about voting.

WOW you have a tombstone generator. that is awesome. I want one for my birthday this year! just kidding. Don't retire it when you write Donald Trump's epitaph though. My Mother's comments on the Nazi's in Europe was, remember it can always happen again. its happening again. So given you are not that old, o.k. you're not an aging baby boomer you may need it in another 20 or 30 years, because this political shit just keeps going on and on. Thank you for the work you do. It keeps us informed. Living in B.C. and not reading extreme right wing news I actually didn't know Conservative politicians did interviews with the Rebel. I know that old line of, keep your friends close, but your enemies closer, ....... I make a point of reading right wing business news to keep up to date with their thinking but actually never thought about reading Rebel and the like. OMG......... this blog is an education.

hi Jay...I saw that petition and I understand how you feel. Why try to straighten out the Cons, when we can hammer them in the next election. A petition isn't going to get them to change their ways, the rot is too far gone. It's actually quite a fascinating story, if you're a political scientist. The Cons have morphed into a version of Trump's Republicans, which couldn't be more alien or less Canadian. I only hope the good people of this country will beat the hell out of them in the next election...