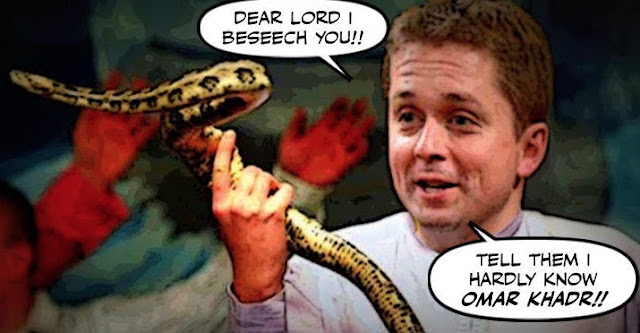 It wasn't long ago that I told you that Andrew Scheer and his grubby Cons had dropped the Omar Khadr story like a hot potato.

Or a poisonous snake.

After spending days trashing our country in the United States for crass political purposes.

And now we know why. 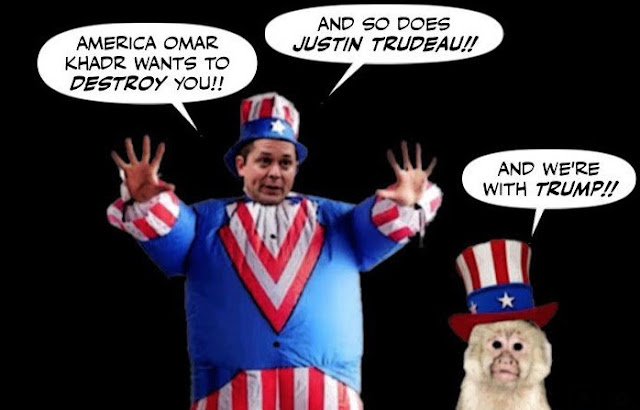 It seems that most Canadians don't like that kind of treason.

Most Canadians oppose the decision of some Conservative MPs to appear in the U.S. media criticizing the federal Liberals' $10.5-million payout to Omar Khadr, according to a new Nanos survey.

"What we've seen is that [the Conservatives] have reversed the momentum that they created after their leadership with their focus on Omar Khadr," said Mr. Nanos.

Or these kind of traitors... 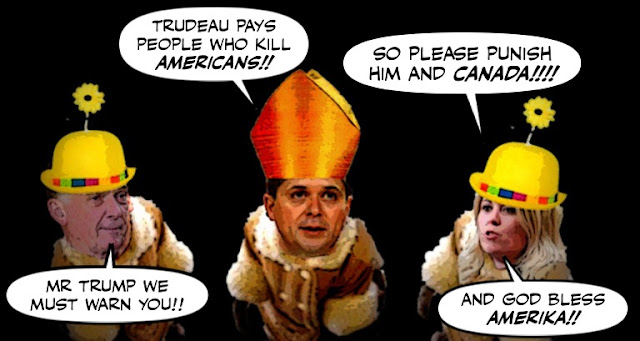 Further, about half of Canadians surveyed said they believe that openly criticizing the decision to pay Mr. Khadr $10.5-million in the U.S. media will have a negative or somewhat negative impact on Canada-U.S. relations.

Who would risk hurting tens of thousands of Canadian workers and their families, just to try to hurt Justin Trudeau.

And to make matters even worse, those treasonous Cons aren't sorry...

Peter Kent is too far gone for anyone to believe or care what he says.

Mr. Kent said he had "no regrets" about raising the Khadr payment in the U.S. media. In an e-mail, he said he has received positive feedback from constituents of all political persuasions that the issue was worthy of North American discussion.

Michelle Rempel was on Power and Politics yesterday looking half crazed and attacking refugees like Canada's Marine Le Pen... 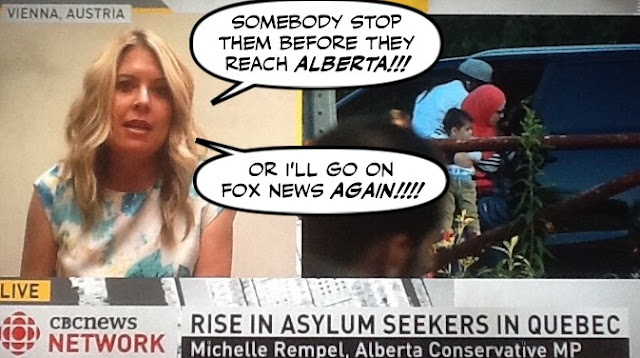 Having now lost what little credibility she had left.

Which it must be said, wasn't much.

And of course Andrew Scheer isn't sorry either... 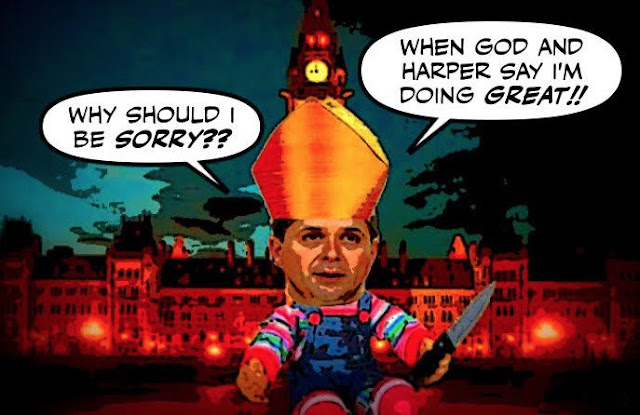 Because he only listens to his Godzilla or the voices in his head.

But he has made a fatal mistake. He has branded himself and his Cons as  bigots and traitors.

Or just the latest version of the Harper Party.

They will not recover, and it will make it easier for us to destroy them...

You know who is going to be easily destroyed soon? Your beloved NDP in Alberta. :)

Our modern day Benedict Arnolds are to engrossed in their hatred for JT to even realize what they've done.
We Canadians will not forget and their fate will rest in our hands, not those of the brain dead Trump supporters they're trying to whip into a frenzy.
If I were JT I'd have them stripped of their Canadian citizenship, sent to Guantanamo and branded as home grown terrorists.
JD

If you want to punish the cons, hit them where it really hurts: the voting booth. "Lock 'em up" is a tempting thought, but Justin wouldn't do that. Harper made it too easy for citizenships to be revoked for "terrorism" (code word for petty crimes committed by persons of Arab/Muslim background) and he wants to avoid any appearance of partisan favoritism. Jailing your political opponents -- no matter how low they sink -- would be the epitome of that.

So instead, he's going to continue leading by example in the way Michelle Obama encouraged the U.S. Democrats to do: "when they go low, we go high." Sunny Ways, mon ami. So far, it's working out well for him, and I hope it continues to work out well for him for the foreseeable future. He's a really great guy, and people are going to be talking a lot about him, more and more. Believe me. :)

I had a bad dream (or heat-infused hallucination) that our incompetent, platform-devoid Democrats played right into the hands of the cons (both foreign and domestic), and kept invoking "Canada, Canada, Canada" as their last-resort explanation for a single-payer healthcare platform, like saying "Beetlejuice" three times in hopes that he'll show up. Con media (which is all Trump listens to and has even awarded press credentials while dangling them conditionally over the heads of legitimate news outlets) then went with a "Trudeaucare" narrative, saying that the Canadian government was influencing the Democrats and interfering with the GOP's efforts to repeal Obamacare. Trump went on TV at one of his Twitler Youth rallies to declare that "Justin Trudeau betrayed ME! He sabotaged MY efforts to kill Obama --" (he supposedly was going to say "kill Obamacare" but the mic cut off -- perhaps intentionally) "-- and I didn't know he was a snake!" The Harpercons carried the torch for their buddies at Fox, and blamed Justin for Trump starting a war with Canada.

Meanwhile, Scheer met with Rexxon in Alberta unbeknownst to anyone outside the inner circle of the cons, and made a surreptitious deal to sell the oil resources to Russia in exchange for ousting Justin in a coup and sending his family into exile -- or worse. They fled to France and hid out at the Champs-Elysees, where Macron had them under 24-hour top security protection.

Fortunately it ended happily, as the four Mounties of the apocalypse rode into America on their unicorns and scared the pants off Trump and the GOP, who quickly high-tailed it to Siberia. The illegitimate con government attempted to introduce a bill that forged a tripartite pact (or unholy alliance) with the U.S. and Russia, but the Armageddon Mounties showed up again -- with the Trudeaus in tow -- and called out like Gandalf, "this bill? YOU SHALL NOT PASS!" The rest of Parliament applauded Justin's triumphant return as the Mounties chased after the cons, who ran out the door shouting "Sic Semper Tyrannis" behind them. Then the U.S. appointed an emergency government under co-presidents Obama and Hillary.

Unfortunately, none of this actually happened, and neither the cons nor Trump and his party of war elephants are in a gulag in Vladivostok. But even if they never are, things will get better. They have to. This too shall pass.

Not particularly bright are you anon 8:40. Simon isn't located in Alberta nor has he been a hardcore NDP supporter anywhere, much less Alabamberta. This is about the federal Conservatives moving further to the facist side of the political spectrum and why it is a poor idea. Do try to stay on topic.

Never said he was in Alberta, mr far from perfect. Simon's a commie, he would prefer NDP in power to the Cons anywhere anytime.

As for moving further to the right I applaud that. Keep moving the Overton Window further and further.

Simon's a commie? Proof? Or just name calling? You applaud totalitarianism? Are you even Canadian? You're even less intelligent than I initially thought. The continued movement of the Conservative Party toward a facist type Christian party will be the death of it. The NDP will form the opposition to the Liberal government after the results of the next federal election due to the foolishness of those currently running the Conservatives. They will have no one to blame but themselves for their disservice to Canada. You see, the vast majority of Canadian voters don't want what the Cons offer otherwise they would still be our government and the current Liberal government wouldn't be as popular in the polls as they are. Back to class to learn for you anon 8:40/6:30.

hi anon 8:40...I suppose it's entirely possible that Albertonia might revert to being a grubby right-wing province, it's that backward. But I don't really concern myself with provincial politics. I like to focus all my energy on making sure the Cons don't get their hands on Canada again. And right now I'm feeling really good about that...

hi Mr Perfect...thank you for defending me, and putting that Con McCarthyite in his place. But please don't use big words like "totalitarianism" because he won't know what you mean. And you are right when you say that our Cons are heading in the wrong direction and that their Christofascism will lead them to disaster. You'd think they would understand that, but dinosaurs never do...

hi JD...I understand why like so many decent Canadians you feel that way, but we don't have to be that extreme. Justin Trudeau is still weaving circles around them, and the Cons are slowly but surely killing themselves. As that poll showed, Canadians aren't buying their frothy nonsense. And wait until we really go after their Great Leader. Now that the Trudeau government has dismantled their voter suppression schemes, I expect the next election to be even more enjoyable than the last one...

hi anon 1:07... don't worry, JD is a good person and a real democrat. It's just that like many other good Canadians he sometimes loses his patience with those scurvy Cons, and wishes they would take flight to Guantanamo or Alabama. I on the other hand would not like to see the Cons enjoying sunny Cuba. I would much rather watch them go round and round like barbecued chickens... ;)

hi anon...I must say I greatly enjoyed your horrible nightmare, but only because it had a happy ending, with the mounties of the apocalypse riding in on their unicorns and scattering the Cons like pigeons. In fact I like it so much I want the movie rights !!!!!!!
Seriously though, you do have it right. Keep smiling, don't let those Cons get us down, or give them an inch. And things will get better, and this too shall pass...

Cons have always been traitors.