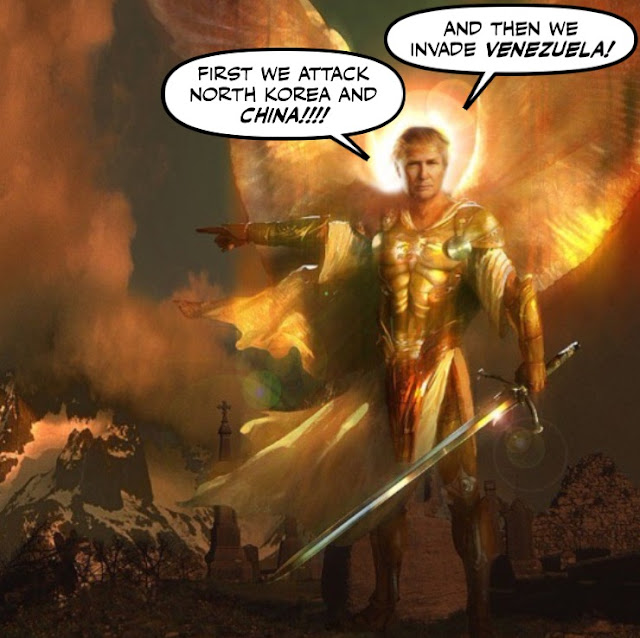 Ever since Donald Trump went on the war path and started exchanging threats with North Korea, he seems like a new man.

And not in a good sense either.

For Trump has always seen himself as a Great Warrior Leader, and the idea of distracting Americans from all his scandals and his inability to govern with scary thoughts of nuclear war, has him in a fevered frenzy.

For what else can explain why he can't stop threatening the North Koreans, and ratcheting up the crisis instead of trying to defuse it?

And worse, if that's possible.

What else but war fever can explain his threat to invade Venezuela?

President Trump said Friday that he is “not going to rule out a military option” to confront the autocratic government of Venezuela President Nicolás Maduro and the deepening crisis in the South American country.

For this does sound like a declaration of war.

"Since the start of this Administration, President Trump has asked that Maduro respect Venezuela’s constitution, hold free and fair elections, release political prisoners, cease all human rights violations, and stop oppressing Venezuela’s great people," the White House said in a statement late Friday night. "The Maduro regime has refused to heed this call, which has been echoed around the region and the world. Instead Maduro has chosen the path of dictatorship."

And what makes that even scarier is that it comes at the same time as he prepares to fight North Korea, and maybe China.

For this warning couldn't be clearer or more ominous.

China won’t come to North Korea’s aid if it launches missiles threatening U.S. soil and there is retaliation, a state-owned newspaper warned Friday — but it would intervene if Washington strikes first.

But I can't help but wonder whether Trump in his feverish state will heed it. 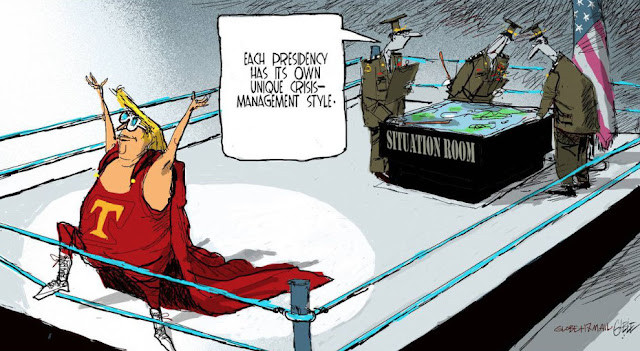 Especially after listening to his phone conversation with the governor of Guam, the tiny Pacific island where anxiety levels are naturally rising like a missile.

Cover your head, strip off those irradiated clothes and make sure not to look at the glaring fireball. These are among the guidelines Guam has released as, amid escalating tensions with North Korea, the small Pacific island contemplates the nightmare scenario of a nuclear strike.

And realizing that Trump just doesn't get it, and is actually suggesting that the threat of nuclear war is good for business.


BREAKING: Trump calls the governor of Guam…to congratulate him for becoming "extremely famous" amidst an escalating crisis with North Korea. pic.twitter.com/VvQae43nZb
— The Last Word (@TheLastWord) August 12, 2017


And if you thought that was weird, the official White House summary of that conversation is even worse. 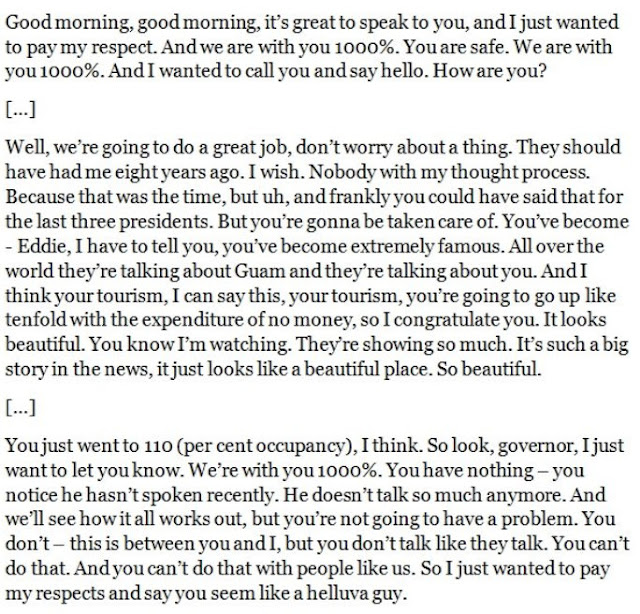 And yes, Stephen King who knows a horror show when he sees one, is right...

He is too dangerous to be allowed to remain in office.

And he must be locked up as soon as possible... 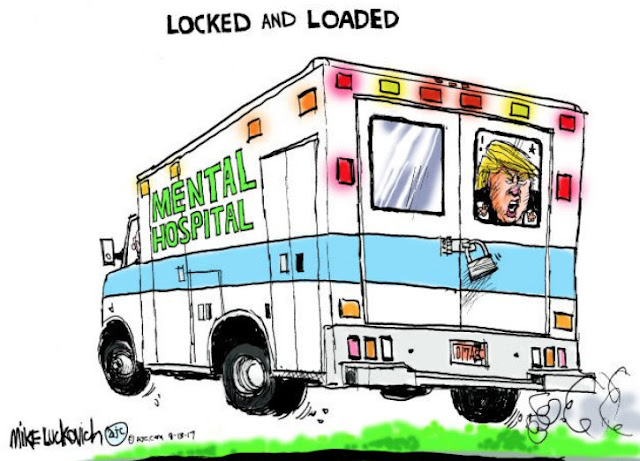 Venezuela does need help. Your socialist utopia isn't working out so well comrade.

There is a huge racist #UniteTheRight rally in Charlottesville VA. Fascism has indeed come to America. We've lost.

Impeaching President Trump begs the question of who will replace him.
The Vice President?
Out of the frying pan into Hellfire!
https://theintercept.com/2016/11/15/mike-pence-will-be-the-most-powerful-christian-supremacist-in-us-history/

You are encouraging the USA to violate the UN Charter and invade Venezuela?

Worked out really well in Iraq, didn't it?

But as I mentioned in an earlier post he may not be that bad for other countries. It's just his internal policies that are likely to be hellish (using the word advisedly).

Except as someone brought to my attention he thinks we are in the End Times and might be tempted to help things along with war or two.

If Pence ever became President, we would have to start building more refugee camps.

Shades of Robert Heinlein’s Revolt in 2100

And yet the cons and the delusional Maganoids hanging out on YouTube comment sections and other dark corners of the internet have a favorite nickname for Trudeau: They call him "Kim Just In." Couldn't be a more far-off comparison. He just sent an envoy to Pyongyang to successfully negotiate the release of a Canadian prisoner. The conspiracy machine is out in full force saying that he "undermined" Trump and "sabotaged America's mission" to give a head's up to "his fellow communist."

Fake news! What he's doing, besides the surface mission of getting the man out from behind bars, is a subtle display showing that diplomacy IS possible, even with a place like North Korea. Kim may be wacko, but even he is apparently easier to negotiate with than Trump. Trump is completely certifiable. The world should have listened to Maggie Trudeau's HuffPost interview (where she said he needed professional help for his own sake and especially that of the country), and so should he.

Chrystia Freeland just released a statement urging Washington and Pyongyang to "de-escalate." Kim isn't going to back down in the face of Trump, and Trump won't listen to a woman. Least of all a Ukrainian woman whom Vlad hates, and will train his pet orange pit bull against.

He's got the CEO of Exxon as his Secretary of State and a memory-challenged Texan now moving up to DHS. This is 2002 all over again except split over two nations. We're going after North Korea because of "WMD" and we're going after Venezuela for oil. Renewables will never take off in America, because we won't kick our profitable petroleum addiction. We've fracked Oklahoma to the point where it has as many earthquakes as California. We've sent SWAT teams to clear out pipeline protesters. Trump has persecuted climate scientists to such an extent that Harper probably has a case to be made for plagiarism.

All this so we can continue beating the oil drums and the war drums and feeding the beast of the out-of-control blood-for-profit machine that Eisenhower warned us about upon leaving office. That, and so the merchants of agitprop can have an excuse to bash "socialism" to justify shredding whatever's left of the safety net. Republicans think Canada is no different from Venezuela and don't want "stepping stones to Sovietism" reaching American shores. Too late. They already sold out to the KGB... ironically, to satisfy their Religion of Reagan.

Hm, "Unite the Right." Sounds familiar. Isn't that a slogan that the Canadian cons used to describe their unholy pact with the devil that turned them from the PCs into the Crappers?

The creativity is not strong with these ones. Hate is the belly of the dark side...

@JKRideau -- you're going to need to build them anyway for the second wave of draft resisters who don't feel like being turned into mince meat in either Pyongyang or Caracas (or both). Especially those who've already been through the ringer multiple times in Iraq and Afghanistan. A number of whom probably had fathers who went through the ringer in Khe Sanh and Saigon.

Have you heard the GOP's new slogan?

At least 50,000 arrived in Canada when Trudeau père was in office. Trudeau fils, meanwhile, can probably expect a third of a billion to crash the northern border, the minute Twitler announces the reinstatement of the draft in a tweet.

Rideau -- he probably thinks Canada is a communist country itself. Most Americons, and even some of their northern counterparts, do. There's a "Kim Just In" meme that's trending right now, accusing Trudeau of sabotaging Trump's North Korea mission to give a head's-up to a fellow comrade. The cycle of delusion just keeps rolling with these people.

hi anon 9:17am... Venezuela does need help. Low oil prices have hurt its economy and many of its citizens are poor and hungry. But it needs food and economic aid not a military solution...

hi anon 9:58...Fascism is indeed roaming the streets of America. But there are still more of good people than there are fascists. Give the Trumpkins enough rope and they will hang themseves...

hi hinofan...While it's true that impeaching Trump would leave us in the hands of the religious fanatic Pence, everything is relative, and I would trust Pence with the nuclear button more than I would trust the orange oaf. And since most Americans want a democracy not a theocracy Pence won't last long either...

hi anon 7:45... I like that comment too. It's very powerful and bang on. If Trump is thinking about Venezuela it has almost nothing to do with democracy and everything to do with oil. I too can't forget how he mused about seizing Iraq's oil fields, as if the Iraqis would give them up without a fight. The man is delusional, but because he is so flawed I very much doubt he will ever win another election, and decent Americans can start rebuilding their country as soon as he is defeated, and hopefully jailed...

hi anon 7:47...yes that slogan does sound familiar. The same slogan the Harperites used to destroy the PC party, and the same slogan Jason Kenney is using to try to seize power in Alberta. Clearly creativity is not their forte, hate is the rumbling belly of the dark side. But we're still going to whup them...

I Won't Back Down — Tom Petty & The Heartbreakers
https://www.youtube.com/watch?v=nvlTJrNJ5lA

I/ WE WON’T BACK DOWN

[Donald Trump & Kim Jong-un:]
Well, we know what's right
We got just two lives
In a world that keeps on pushin' us around
But we’ll stand our ground
And we won't back down