Another Trudeau Hater Trashes Canada in the United States 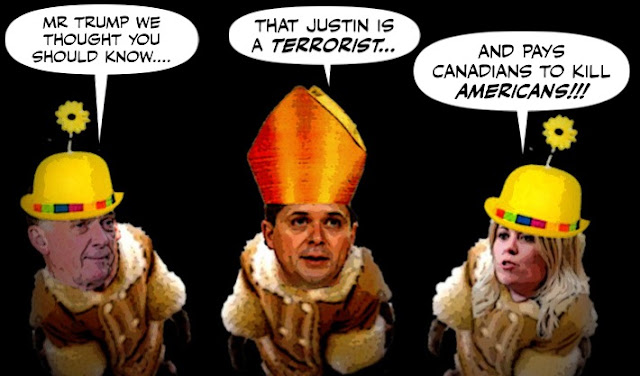 You might think that the Cons would know better to keep trashing our country and our government in the United States.

Especially after polls showed that their treasonous behaviour wasn't making them any more popular in Canada.

But sadly that's not the case. For first there was Peter Kent, then there was Michelle Rempel. 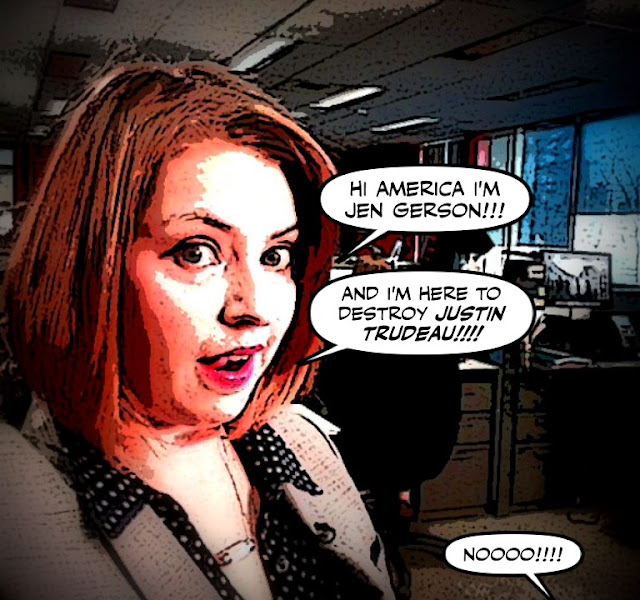 Making an absolute fool of herself by squatting down and crapping all over Justin Trudeau.

Although Trudeau has proved to be a powerful public relations coup for my country, the political erotica now streaming from the southern border is embarrassing, shallow and largely misses the mark. Trudeau is not the blue-eyed lefty Jesus, and the global affection for him — and for the progressive politics that he and this country seem to represent — presents a puerile and distorted vision of Canada and its political culture.

With an article that attacks our precious medicare system at a time when Trump is planning to deprive tens of millions of Americans of any healthcare coverage at all.

Canada’s laudable efforts demand a little perspective. Its targets pale in comparison to those of Germany, which had accepted 890,000 as of last year, and other European nations.

At a time when her beloved Cons have been claiming that one was too many.

And to make matters worse or even more idiotic, Gerson claims that Trudeau has done nothing to justify his extraordinary popularity. 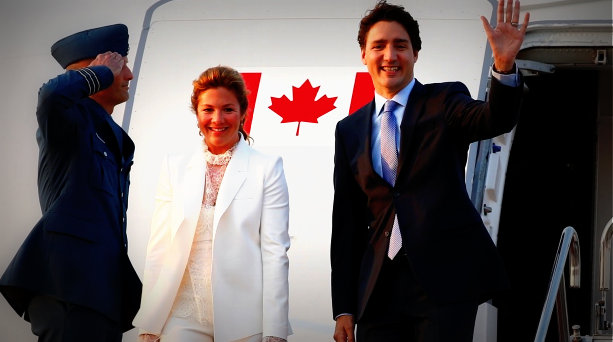 The most stinging truth about Trudeau is that he hasn’t done much at all. He came into power an avatar of youthful Canadian optimism and has squandered one of the most extraordinary honeymoon periods any politician has had in recent memory.

As if that extraordinary honeymoon period had nothing to do with Trudeau's achievements, and these numbers in a country with FIVE political parties were not worth celebrating.

Canadians have rewarded Trudeau with mediocre poll numbers, typically hovering at between a 50 percent and 60 percent approval rating.

And were mediocre instead of extraordinary.

But then of course, that's Gerson. A grubby Con who has never stopped praising Stephen Harper, or blaming Lord Grub's downfall on the "Ottawa establishment," and its never-ending war on her beloved Alberta...

Which is so absurd it should disqualify her from ever writing another political column.

And all I can say is thank goodness most of her Washington Post readers are not as dumb as she is:

I don't think any of us believed that Trudeau invented Canada. We are simply struck by the contrast between him and the ghastly thing that inhabits our White House. We'll "take it easy" when that thing is gone.

What was the point of this article? So, Trudeau may be less left wing and Canada's universal healthcare may not be snow-white perfect. SMH. Don't let perfect be the enemy of good.

No place is perfect. Nor is any leader. However, we've heard no reports about Justin Trudeau displaying the selfish, misogynistic, greedy, vindictive and erratic behavior which we witness almost daily in the person of Donald Trump.

No mention of the horrific mess left by years of science muzzling, media stifling, religious fear mongering left by the Conservative party, but to each his own I guess.

The reporter for this piece sounds like Fox News reporting on Obama.

But don't expect Gerson to take their views into account. Because she's as Fox News as they come.

Her claim to be a "serious journalist" is nothing but a joke.

And as you can see she's not sorry for trashing our country, its leader, and its people.

Like so many other treasonous Trudeau haters in this country.

And all I can say is, Gerson should apply for a job in the United States if she hates this country and misses Stephen Harper so much.

And as for Postmedia, the Con propaganda service.

She's a much better writer than you Simon, don't quit your day job.

For the most part we are a rational people. Yet do not doubt that Scheer will be PM some day. Its only my opinion but those who are so anti gay are self lothing
people who can not understand the world as it is. I do not care how many children you bring to the party. The good news is that rational people see them for what they are. The danger for Liberals is California where there is no Govener.

Scheer will only win if media succeeds in white washing his montrous views.

Gerson is everything that is wrong with our Con media. The way she admits that most Canadians would hate her piece, but she doesn't care because she got her story in the Washington Post is revolting. As you said, the sooner Postmedia dies the better.

The consensus in the comment section on Gerson's article was that although Trudeau was not perfect, he easily out performed Harper who had set the bar so low in all areas that matter to Canadians.

One thing that really irks the Cons about Trudeau is that he has found a way symbolically promote positive positions on complex problems that counters their simple solution negative messaging. For example it is much easier to promote crime as a growing problem with the need for more jails, jail time and more sweeping police powers when compared to potentially more progressive solutions based on (sometimes conflicting ) scientific studies. Trudeau just uses positive symbolic messaging to short circuit the simple solution negativity trap and it drives the Cons nuts.
As for the Anon 10:06 better writer comment; one of your visuals communicates much more effectively than pages of "unbiased" Con inspired media.
RT

What the hell was that?? She's clearly insane like the rest of them. Their jealousy of Justin is eating them alive. Which couldn't be better for us. This latest treason should keep them out of power for a very long time. Canadians see the Trump Circus and are not about to elect it here. Keep imploding Cons we couldn't be happier. Sunny Ways ❤️❤️❤️ Pamela. Ps thanks for the Scotland videos. My parents were immigrants from Glasgow, I wonder if that gets me citizenship. I was born here, first generation Canadian.

hi anon...Lordy, I had no idea Gerson had a fan club, or a devoted groupie.But you are welcome to her, and as I keep repeating I don't get paid to write, I do it out of a sense of duty. And unlike Gerson I would not trash talk Canada in another country for all the money in the world...

hi Steve...all we need to do is prevent Scheer from winning the next election, and he'll be done like dinner. And we are going to do a job on him like you wouldn't believe. The man is The Walking Dead, he just doesn't know it...

hi anon...I agree, the only way he can win is if the MSM fails to expose his backward views. But that's where social media comes in. It helped us win the last election, and it will do the same in the next one...

hi anon...I used to think of Gerson as just another Rempel. But now I think she's mentally unstable. But it doesn't really matter, because by the time she gets back from maternity leave I will be very surprised if the National Post is still around...

hi RT...yes I was glad to see people in the comment section question the point of her article. For it was all over the place, and all it really did was reflect the angst of the Cons, at their inability to drown out Trudeau's positive message with their deranged screeching. I'm a big believer in positivity not just because it makes people feel better, but because it works to give us the spark to solve our problems. And without hope we have nothing. As for the Con who criticized my writing, what he had to say just goes in one ear and out the other. I have several writing styles, one for the novel I'm writing, one for my poems and songs, and one I use on this blog to try to make complex political questions as easy to understand as possible. Many Canadians, especially younger ones, find politics boring, And I want to help change that try to persuade as many as I can to engage in the political process. It sounds very lofty, but it isn't, and I really do enjoy it...

hi Pamela...I don't know where Gerson is coming from, but as I said above, I'm starting to question her sanity. And I thought her absurd Trudeau hating column was absolutely disgraceful. But they will, as you point out, be very disappointed when the next election arrives. They don't seem to understand that acting like Trumpkins is the worse possible way to take on an anti-Trump like Trudeau. And they will pay for that ignorance big time. As for my Scotland pix I'm glad you enjoyed them. Glasgow is Scotland's most progressive city, so although you were born in Canada you have excellent roots... ;)

If either of your parents were born in the UK, you are invited to apply and will likely qualify for citizenship. I think the British initiated this type of "jure sanguinis" right to citizenship sometime in the 1970s after the citizens of many countries that were former colonies and dominions of the Empire had ceased to be British subjects. I don't think the process is as loose in its application as the Italian model. Making the application is definitely the Canadian thing to do, but I'd advise against it.

The description of Glasgow that I got from my granddad, a boy from the farm who was a policeman in that city from 1910 to 1914, is that it was teeming with squabbling Irishmen. The polished wooden baton that he used to bash them on the neck, when breaking up their fights on Saturday nights, is one of our most valued family heirlooms.