The Wonderful Humiliation of the Bigot Ezra Levant 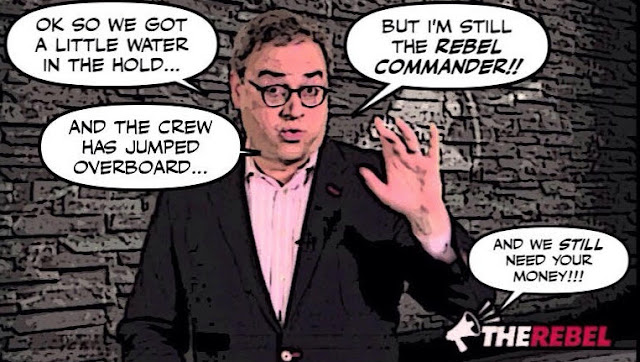 For days even as his ratty Rebel started to take on water, and half his crew abandoned ship, Ezra Levant insisted that everything was under control.

But now that ghastly bigot has finally been forced to confront reality.

Now he's finally admitting that The Rebel is in deep trouble. 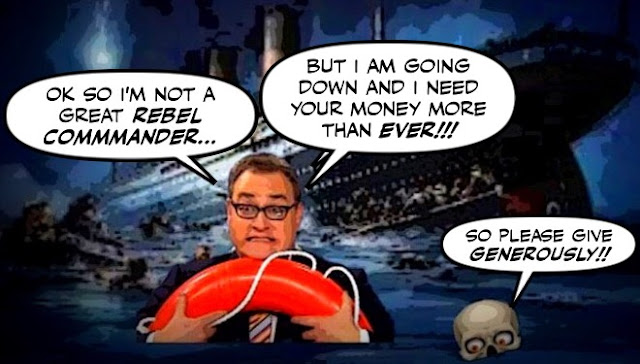 And that he's not much of a Rebel Commander.

The founder of the online news site The Rebel admits its content and management need more oversight in the wake of a string of controversies.

“I’m a flawed leader who has made mistakes,” he wrote in a post on the conservative news site late Tuesday.

“But as long as you stand with me, I will still stand.”

But he's still claiming he can save the sinking ship, if his faithful suckers send him more hate dollars.

We’re going to reboot without taking a dollar from the government. We’re going to do it the same way we built the company — through your support, through crowdfunding.

Even though the man who is always accusing progressives of accepting foreign money, is now being accused of counting on foreign money to help finance his filthy operation. 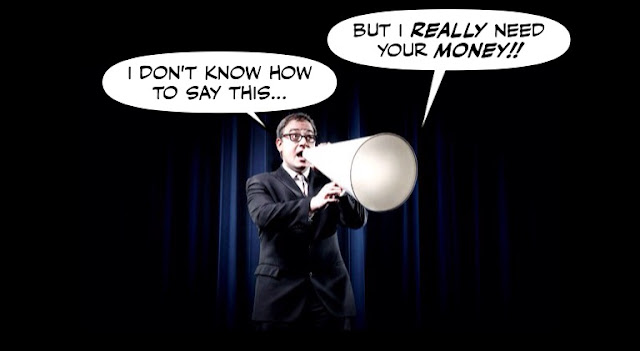 Ex-staffers say the operation is fixated on building its email list and subscriber base through increasingly combative and invective campaigns. But also that The Rebel lives on “mega-donors” who underwrite the operation.

Laura Loomer and U.K. host Tommy Robinson are listed on the website as “Shillman Fellows.” That fellowship, run by tech billionaire Robert Shillman, has put money towards media personalities who tout an anti-Islam line.

But he has lost more than 15,000 subscribers in just one week. More than 300 companies have withdrawn their ad money.

That defunding campaign is continuing no matter how loudly or how absurdly he squeals... 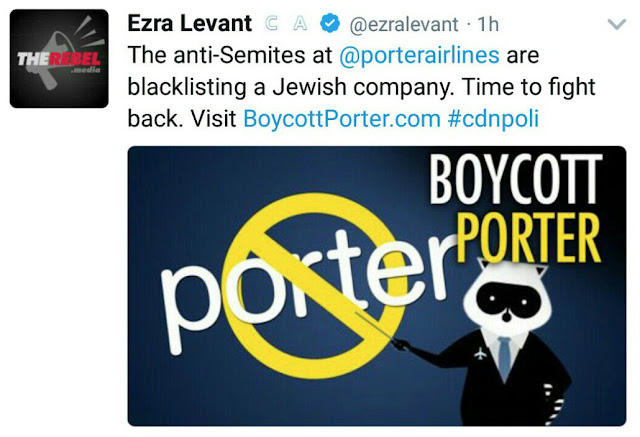 The Canada Revenue Agency is reported to be getting ready to audit him.

And rebooting The Rebel won't be as easy as Levant would have us believe.

Not when he has lost almost all his front bench "talent," and replacing them won't be easy. Not when the stench of bigotry hangs over his grubby operation.

And not when he's caught between a rock and a hard place.

For while he needs to become more mainstream to try to make the Rebel look more respectable, he must surely know that would drive away most of his moron base who have faithfully followed him since his days at Sun News... 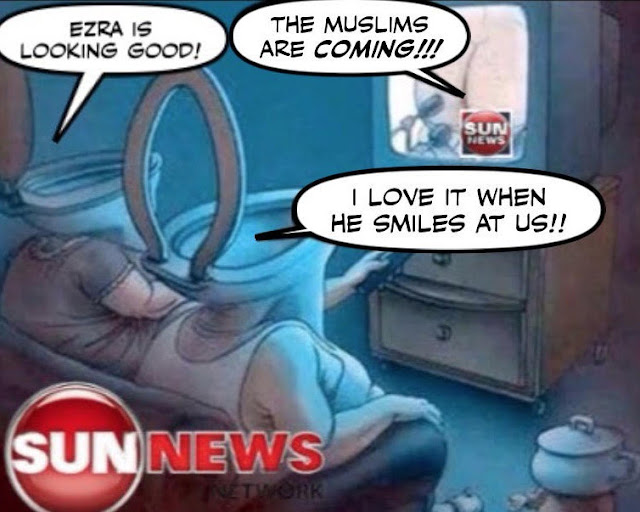 As well as know that it's highly unlikely that any decent Canadians would volunteer to replace them.

So while his ratty Rebel may limp on, it will never be what it once was. Or what the Rebel Commander hoped it might become.

Levant has been exposed as an ugly hate monger, and a major league loser.

He has been humiliated beyond recognition.

His hate mongering rag is going down the toilet.

And so eventually will Levant... 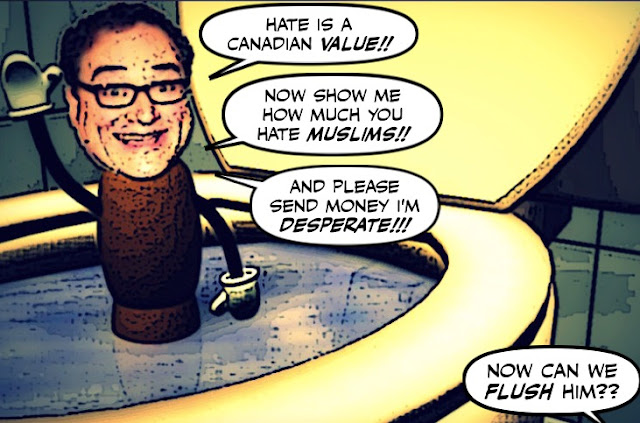 Levant's appeal strikes me as just another fundraising opportunity. But it is good to see him humbled at last.

The worry is that he will just reinvent himself again. He has managed to squirm out of any number of fiascoes in his "career" (human pinball?) and he may resurrect himself as something else.

Perhaps we should mention that the Saudi Government is fairly generous in funding Salafist imams around the world. Or perhaps he could become an anti-vaxer. It seems a reasonably well-paid gig.

One good thing is that Levant won't be able to back the Cons in the next election. He might try but if he does his good friend Scheer will beg him to please go away. As Simon says he'll never be what he once was.

All he needs to do is hire a couple cute ladies with conservative talking points and he'll still make bank. Maybe not as much as before, but I predict this is not the last we see of him.

Just think of all the financial security we could have if only we didn't have any scruples, intelligence, or morals! Might have to take out a small loan of a million rubles, but hey, all's fair in the business of war! If you're not rich, it's because you haven't been preying hard enough and whipping those dopey losing whiners with their own bootstraps! MAGA! MAKE ANGER GREAT AGAIN!

(Seriously, is it possible we reached peak evolution as a species and are going backwards now...?)

Hi anon...yes it is probably another fundraising appeal. But at least he's not using hate to get people to fork over their sucker dollars. Now he wants people to feel sorry for him. Good luck with that one...l

Hi anon....yes that's a very good point. He'll never be able to rehabilitate his reputation in time for the next election, and since the Cons will almost certainly go negative again, that should deprive them of a platform to whip up hatred against Muslims and refugees again...

Hi anon....yes, as I said in my post, I'm sure he can keep The Rebel afloat, but it won't be what it used to be. He will also probably hire a harem of Faith Goldy lookalikes, to try to give the Rebel some sex appeal, since Sheila "Gunner" Reid can't fill that vacancy, or that hole. But again as I said in my post, if he really wants to reboot The Rebel, he's going to have to walk an ideological tightrope, and my guess is he will land on his head....

Haha Simon, you made me simultaneously laugh and want to puke over that image. Even if he does moderate his views publicly, it'll be seen as a fake veneer over his true self -- which is well-documented over more than a decade in print and on video. Levant's "career" is over and he's probably going to die penniless. The troubling thing, however, is that a new generation of Levants is already waiting in the wings to rise from the ashes. It's going to take a LONG time to scrub out hate because apparently it's not going to just die out with the older generations. Levant himself is only in his, what, 50s? Meanwhile, that punk Robertson looks like he doesn't even have a driver's license yet. He makes Justin Bieber look geriatric.

This is not what our grandfathers fought for. I saw that CBC telefilm about WW1 that Trudeau was in, and first thing I thought was, boy, what a better world we'd have if Papineau lived and a certain mustachioed Austrian died. Even better if Papineau came home a hero for popping lead into that guy's lone shriveled testicle...

Hi Steve...I'm not a big fan of the MSM in this country, but even the crappy Sun is better than the Rebel. The Rebel exists only to whip up hatred for money, and you can't get any lower than that...

"Re-hire Faith Goldy. There is no reason she should have stayed away from the events at Charlottesville, and as it turned out, she was right in the thick of it. I thought the video of her walking through the angry antifa crowd showed how quickly protests can turn ugly, how crazy they can be. One woman charged after her and was very threatening, but Faith kept on walking through the crowds. That took courage. Well done Faith Goldy.
Hire her back, Ezra. Don’t cave in to the left."

giant fascist pinatas finally bursting, that is the MSM. Case in point Sandi Rinodo interview with the legendary Bob Marley.

giant fascist pinatas finally bursting, that is the MSM. Case in point Sandi Rinodo interview with the legendary Bob Marley.