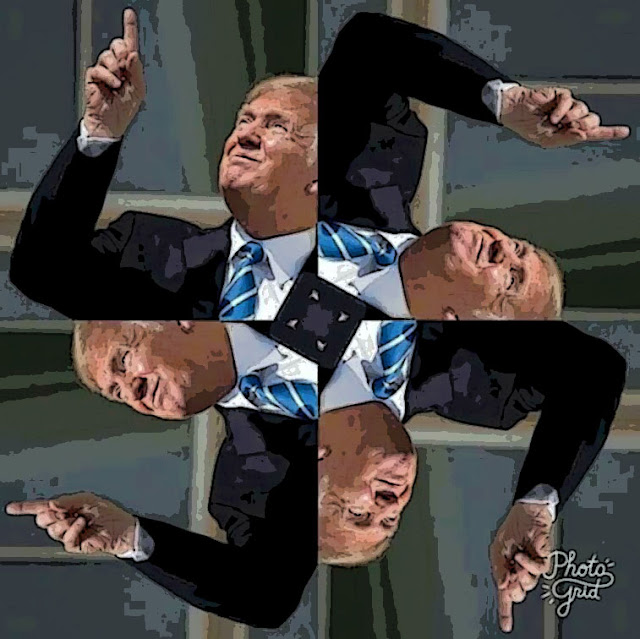 It's hard to find a pattern in anything Donald Trump does. He's here, he's there, he's everywhere, he's out of his mind, he's making it up as he goes along.

But ever since that Nazi party in Charlottesville, a clear pattern is emerging, and it couldn't be more disturbing.

Trump has always been loud and vulgar, a bigot and a bully.

But now he is going full fascist. 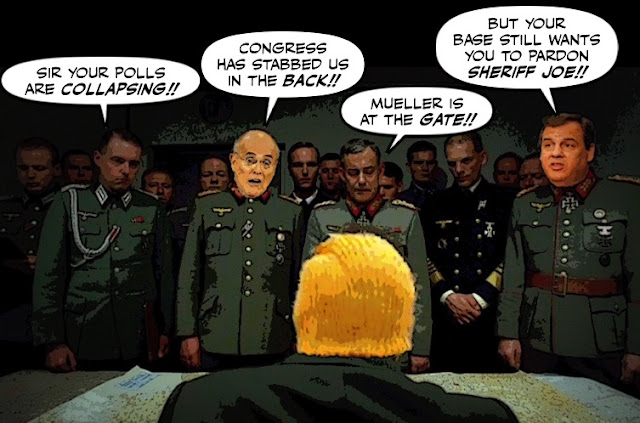 President Trump on Friday pardoned Joe Arpaio, the former Arizona sheriff whose aggressive efforts to hunt down and detain undocumented immigrants made him a national symbol of the divisive politics of immigration and earned him a criminal contempt conviction.

For not only is Trump pardoning a man who deserves to be punished for turning a jail into a concentration camp, where inmates were abused and humiliated for the sadistic pleasure of their Kommandant. 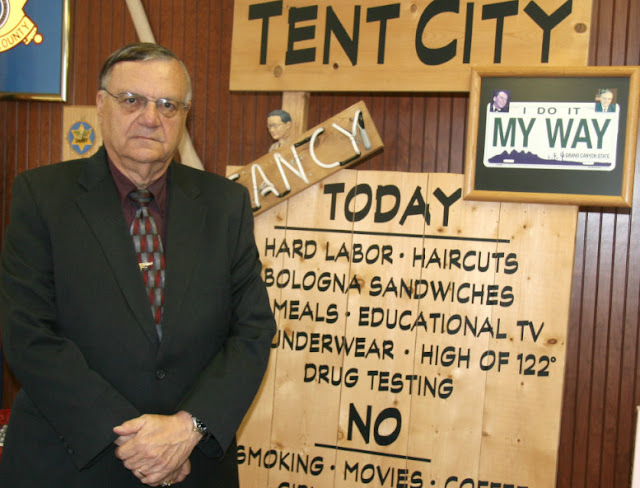 It is the act of a fascist.

The Trump presidency has been the most shocking and awful in modern American history, with the president threatening nuclear war, saying that “fine people” march alongside Nazis, implementing a “Muslim ban.” But Trump’s pardon of former sheriff Joe Arpaio is the worst, most dangerous, and most terrifying of all his antics.

Not only because it is an endorsement of Arpaio’s racism and birtherism, not only because it was done without any of the appropriate processes and procedures, but first and foremost because it is a direct assault on the rule of law itself. I haven’t used the word before, and I hesitate to use it now, but Trump’s action is fascist.

There is no other way to describe it.

At a certain point, “fascist” becomes the most accurate term to describe what this man does and the Arpaio pardon is that point. It is the perfect confluence of tendencies: disregard of the courts, mob justice, ethno-nationalism, authoritarianism. It is the brute exercise of power to attack a disliked minority, unchecked by the rule of law. “Fascist” is not an incendiary slur – it is an accurate description.

But although some say he's doing it because him and Arpaio have been bosom buddies since the days when they were smearing the first Africa-American president of the United States with their so-called birther conspiracy.

And that Trump needs to feed his racist base some red meat to make up for firing Steve Bannon, the Breitbart Gruppenführer... 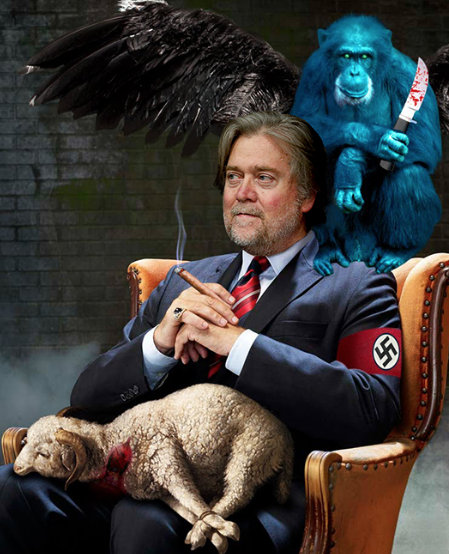 I think the main reason is to send out this message to those who Robert Mueller is investigating:

Don't worry, don't squeal, if Mueller nails you, I'll save you.

Which would further undermine the rule of law, and turn that country into a police state.

So Joe Biden is right, Americans are now fighting for the soul of their nation.

Now he’s pardoned a law-enforcement official who terrorized the Latino community, violated its constitutional rights, defied a federal court order to stop, and ran a prison system so rife with torture and abuse he himself called it a “concentration camp.”

But the good news is that the Americans have fought the fascists before and defeated them... 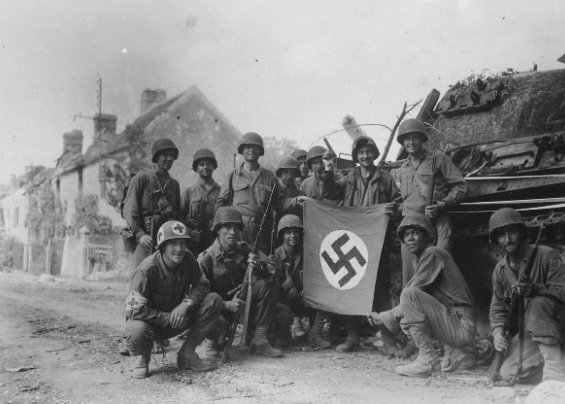 They will defeat them again.

And when that ghastly fascist, or would be American Fuhrer, goes down.

He's taking the Republican party with him.

And he's going down hard... 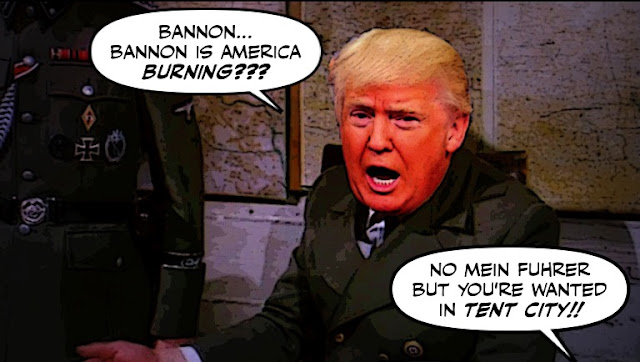 I read recently that Joe Biden is considering whether to run for president. Some say he's too old, but after reading that column I think he might be the Trump slayer we need.

Trump and that Nazi sheriff deserve each other, and both should be put on trial when this nightmare is finally over

America likely wouldn't have defeated fascism in Germany without the help of Russia. This time, Russia seems perfectly happy to see fascism take hold in America, just as it's taken hold at home.

Agree that "stick with me and I will pardon you" is the message but at the same time it's just another diversion to force people to choose sides and fight one another while he continues on his joy ride. Like the kid who stole the keys to the family car he has a destination in mind,has run over a few people along the way and not sure how to get there but as long as he is still moving its all good. Hopefully there is a solid road block complete with tire spikes being set up somewhere over the next hill. So far all its been is plastic road cones and cardboard cut outs.
RT

Arpaio ( not sheriff, he was voted out in 2016, I refuse to use the word sheriff when speaking of him) was found in contempt of court in a federal court with a federal judge presiding. His defense was that the Court Order was vague and not clear in it's wording. The link to the judges decision is here http://archive.azcentral.com/persistent/icimages/news/arpaio%20contempt%20decision.pdf and the contentious part they did not understand, despite several meetings with an attorney who explaned the order, the MCSO and Arpaio is :
"MCSO and all of its officers are hereby enjoined from detaining any person based only on knowledge or reasonable belief, without more, that the person is unlawfully present within the United States, because as a matter of law such knowledge does not amount to reasonable belief that the person either violated or conspired to violate the Arizona smuggling statute, or any other state or federal law."
It seems clear that the order is instructing Arpaio that he needs charges based on evidence to detain people- a belief or personal knowledge without evidence is not enough.
Unfortunately, the hypocrisy of the right complaining that Arpaio was a good sheriff who was supporting the Constitution, while celebrating the total lack of legal procedure in this pardon is lost on the "Law and Order" party. This will Führer split the Americans between right and left; and adds to the idea that extreme hatred based on race, color, ethnicity, religion, disability, belief, looks, clothes, class, politics, etc. is acceptable in a civilized society.

That Twitter list from the Phoenix New Times is unbelievable. That "Sheriff" is a racist animal, and Trump should never be forgiven for pardoning him. I hate to think what he will do next, and I don't think anyone in Canada can feel safe.

He can't be any worse than Hilary was.

Even Trump's faithful Husky Paul Ryan is voicing his displeasure with the Fuhrer's latest abuse of power. Nothing yet from Senate leader Franklin the Turtle though word is he and Adolf are on the outs.
Trump keeps alienating those he needs most and will certainly make it easier for them when they finally pull the plug on this despicable excuse of a president.
JD

Tell me about it. I am hoping "invade Canada" is the type of order that would cause mutiny amongst the defense secretary and joint chiefs. He needs to be removed ASAP. I will never forgive the Americans for this.

It's a bit closer to reality to say that the USSR defeated Nazi Germany with the help of the Western Allies. This is not to downplay the US's contribution, their industrial input alone was incredibly valuable.

hi anon 7:32...I have also discounted Biden thinking he was too old, but then I like Bernie and he's even older. And although I dream of a younger candidate to take the fight to Trump, Bernie and Joe are looking pretty good to me...

hi anon 11:44...Hillary might not have been the ideal candidate, but one thing is for sure, she would have made a much better president than the depraved clown Trump...

hi anon...As far as I'm concerned Arpaio is a criminal who should have been charged and jailed a long time ago. And for pardoning him, and for all his other crimes against human decency, Trump deserves to be his cell mate....

hi anon...I find the situation very depressing, for I greatly admire the way the Russians broke the back of the Nazis during the Second World War. And one of my great war heroes is the young Russian soldier who climbed the Reichstag under fire, and planted the red flag in Germania's crown. So I'm hoping the young will liberate Russia again, this time from Putin and his thugs...

hi RT....yes you're right. One mustn't exaggerate Trump's strategic qualities. Everything is a diversion or a crass attempt to pleasure his rabid redneck base. Still, he has been going on about his power to pardon for a while, so its definitely on his mind, as is I'm sure Bob Mueller. But the good news is that should he pardon anyone for refusing to testify, his crazy ride will end in the ditch, and he will face impeachment....

hi Filcher...I agree with you completely, and if you read the comments in Breitbart saluting Arpaio's pardon I'm sure you'd feel like barfing as I did. I absolutely detest bullies and Arpaio and his pink underpants is one of the most grotesque and perverted bullies I have ever seen. And making prisoners live in tents in a place as hot as Arizona, is as far as I am concerned a crime against humanity...

hi anon...yes that Phoenix New Time's list is incredible isn't it. How anyone could call Arpaio a hero is beyond me. And yes Trump is a threat to us and the rest of the world, for his right-wing cancer is spreading all over the place, and our Cons are now little more than the Canadian Trump Party. But the good news is, Trump is going down and so will they...

Pinochet had camps in the extremely hot and arid desert in the far north of Chile, and in the semi-arctic regions of Patagonia. The Argentine junta on the other side of the Andes did pretty much the same.

My Livia takes exception to your comparison of that racist, fascistic P.O.S. with animals. She is solid back and gets on with cats of all colours, and even with doggies.

You care more about the rights of illegal immigrants than law and order. Why don't you head on down to Venezuela and fight the good fight comrade? I hear the fascists need to be put down hard again.

Actually the CRAP's current leader reminds me more of Pence than of Trump.

One of the Anonymousi wrote: "I read recently that Joe Biden is considering whether to run for president. Some say he's too old, but after reading that column I think he might be the Trump slayer we need."

I like Joe Biden. But what I'm really hoping for is for Michelle Obama to put her name into the ring for 2020. Michelle for Prez, and Biden her VP, or vice versa? 8-)