Why Donald Trump Will Almost Certainly End Up Resigning 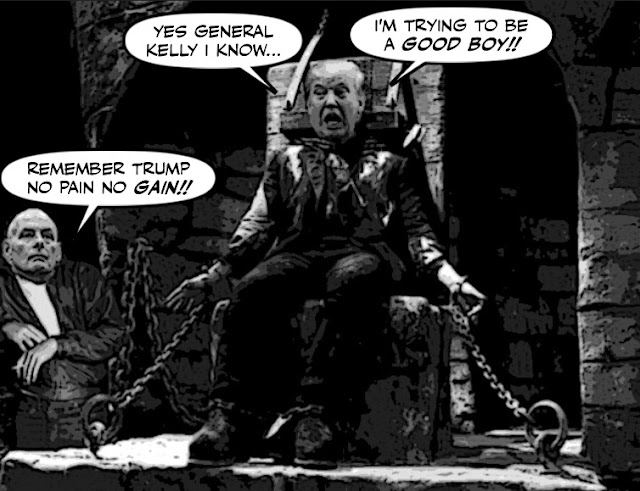 Donald Trump has been at General John Kelly's School for Bullies and Blowhards for two days now, and it does seem to be restraining his worst instincts.

He hasn't had a bout of Twitter diarrhea for almost twenty-four hours, although the strain is showing.

And he still managed to send shockwaves through Washington with a quote, in of all places Sports Illustrated magazine. 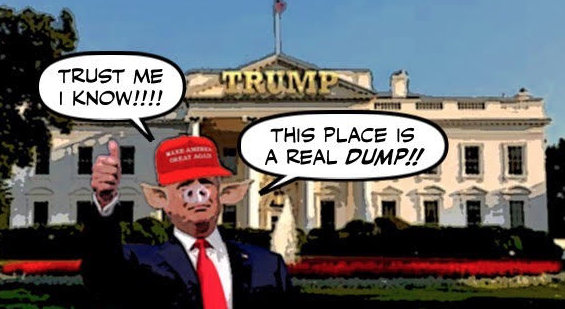 Where he declared that the White House was a "real dump."

President Trump has reportedly denounced his White House digs, telling members at his Bedminster golf club that the historic presidential residence is "a real dump." The president made the remarks to his patrons in an effort to explain his frequent visits to his New Jersey-based golf club, Sports Illustrated reported Tuesday.

But although many Americans were naturally shocked, and Twitter was not amused: 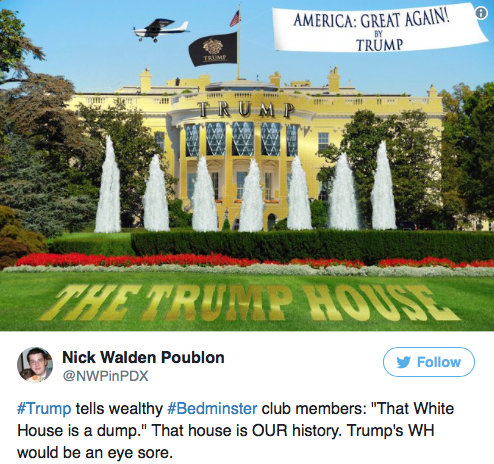 Not just because it means that Trump will spend less time debasing the Lincoln bedroom... 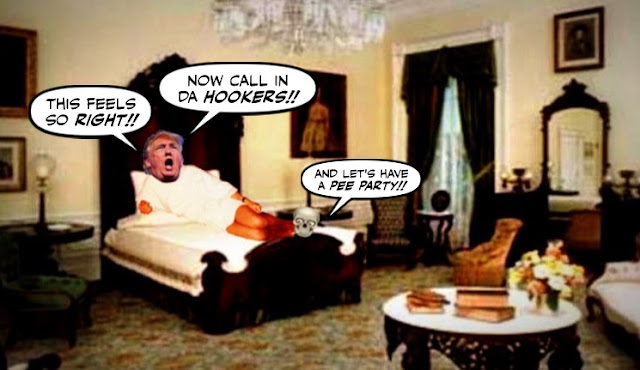 In ways that are too horrible to even think about.

But also because it should make it easier for him to resign, which is how I have always believed his sordid story will end.

As does the distinguished law professor and author Philip Bobbitt.

The likeliest possibility is the President’s resignation, as a consequence of the criminal prosecution of his children. Whatever his policy goals, it has long been clear that creating a dynasty — having destroyed the two reigning political dynasties in the last campaign — is his greatest objective. Resignation, as remote as it seems right now, might well be a choice the President would make to save his children from prison, and himself from future prosecution.

I believe that Trump will end up walking away from the job he didn't think he would get, and doesn't really want.

After trying and failing to run away from this story. 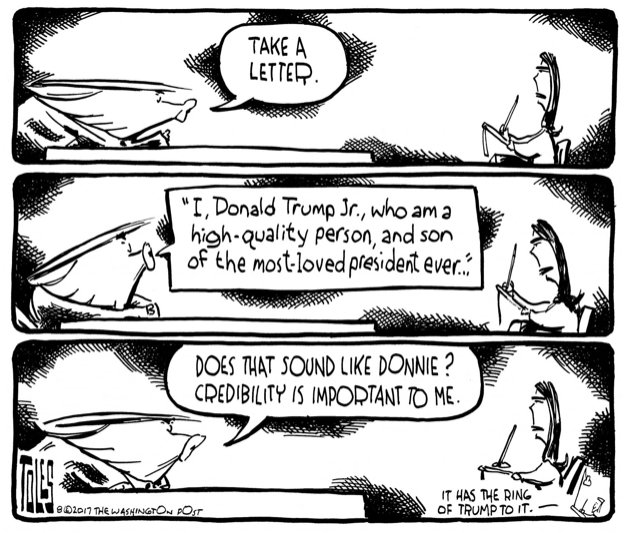 The White House confirmed on Tuesday that President Trump was involved in drafting a misleading statement issued by his son about a meeting with a Russian lawyer last year, contradicting the president’s lawyer who repeatedly denied that Mr. Trump had anything to do with the statement.

Which has obstruction of justice written all over it.

And the only thing I regret is that if he does resign, and moves out of the White House.

He will probably be able to avoid being sent to the Big House... 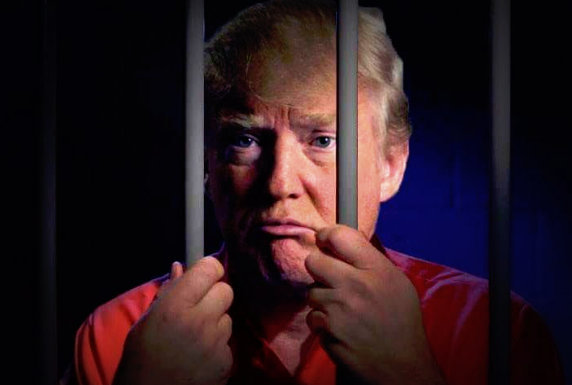 Which is the place where he truly belongs.

And the only place fit for a monster like him...

Labels: Donald Trump, Gen. John Kelly, The Madness of Trump, The Rise and Fall of the Orange Oaf

By reading the fake statement to the committee, Junior lied to a government official. As Martha if that's a good way to land in jail.
Jared's father is locked up for financial fraud . Jared was an officer of the company and he walks the streets a free man. It makes you wonder if he turned informer to save his sorry ass and if he might do it again.

I believe the end goal is to have this guy act so crazy that Democrats and the world will be begging for President Pence. In the euphoria of dump vacating, they will attempt to quash the Mueller investigation. It won't work. Mueller, like the brilliant and heroic Comey, no doubt has a dead man's switch.

it the truth the White House like Sussex drive is a dump.

Above: that should read ' ask Martha'.

What's going on with the Seth Rich story?

The prosecutor who put Martha in jail was James Comey

I love that photo shop of Trump in the Lincoln bedroom. Simon you are wicked. ;)

The Crappercons need an intervention in a locked room where they are required to compare this surreal monstrosity to the handsome, intelligent, compassionate young fella on the cover of the Rolling Stone. NOW do Canadians understand why we Americans are falling all over ourselves wishing we could have "Justin from Canada"?

I dunno if that was a dig at Justin, but if so, it's a lame one. He doesn't even live there; he lives nearby, at a place called Rideau Cottage, as 24 Sussex is in physical disrepair and being renovated. The White House is not, so there's no comparison, either to the condition of the actual building OR to the personality and likeability quotient of the head of government who'd be living there.

The only way the PM's residence would still be a dump is if Harper was still there, hoarding cats who golden-showered all over the carpeting. Maybe he can take in Donald as a stray, Garfield's evil twin brother who's just as fat and orange but has absolutely nothing whatsoever redeeming about his character. Garfield was just a depressive cynic who hated Mondays and had no patience for simpletons. Donald is a downright feral beast. He's more like a Sith Lord version of Scar from The Lion King. Justin is like the cute and cheerful grey kitten who brings joy to people and brightens their day, but who Donald wants to pack up in a box and have shipped one way to Abu Dhabi.

The goverment has said that Suxxex in not inhabitable. Maybe that is not a dump in dump terms.

well he likely was killed the old fashion way. But he apparently did leak to wikileaks

hi anon...the way Trump is antagonizing the Republicans in Congress makes me wonder whether Trump really wants to be president. For if he keeps that up much longer, and he does try to fire Mueller, he's heading for big trouble...

hi Steve... I know there are wacky Trudeau haters out there, but don't become one of them. Comparing Trump to Justin is absolutely ridiculous...

hi anon 10:33...thank you for your comment, and pointing out the truth and making me smile. People who compare Trump to Trudeau need to check their moral compasses, and take their heads out of the gutter...

We sure do anon10:22, we just lived through 8 years of facism under the Evil Stephen Harper. When he tried for another 4 we were jealous of your term limits. If he had won we would be living a similar nightmare as he was prepared to bring in a Barbaric Practices Tip line where you could turn in your Muslim neighbors and an immigration policy like the new one announced yesterday in Trumpland. He only wanted " Christian" refugees and there was a "Canadian Values" test in the works. Thankfully this country of immigrants saw what he was and toppled his dictatorship. Sadly he still hangs on through his Conservative Party who he leads from the shadows. Their new Party Leader Andrew Scheer won the race with help from the Sleazy Hate Site Rebel Media, one of their board members was his campaign manager. There were all kinds of questions about how the vote went down but the ballots were quickly destroyed. As we all know, Conservatives can't win without cheating and lying. Now that we know our Conservatives are aligned with the Rebel who we now find out have Russian connections as well, we will probably have to battle disinformation and hacking in our election in 2019. Hopefully Canadians will learn from the disaster in the USA.
Again, our sympathies, may he be gone soon. 🌞Pamela ❤️💜❤️🌈❤️

hi rumleyfips...I can't imagine what would happen if Trump does fire Mueller. But of course I'm hoping it does, because not only would it finish off Trump, it could blow the Republican Party out of the water...

hi anon...with all that is going on the Seth Rich story probably won't get the attention it deserves. Which is a pity, because it not only makes Trump look sleazy and desperate, it makes Fox News look really bad or like a co-conspirator...

hi anon...Abraham Lincoln is one of my great historic heroes, and the thought of Trump sleeping in his bedroom is enough to make me vomit. So that humble photoshop is just a way to register my disgust. But I am wicked... ;)

hi anon...I have always understood why our decent American neighbours are fond of Justin. When the ghastly Con Stephen Harper was Prime Minister I used to long for the class of Obama. So you won't find me ever mocking you. And I will be your friend forever...