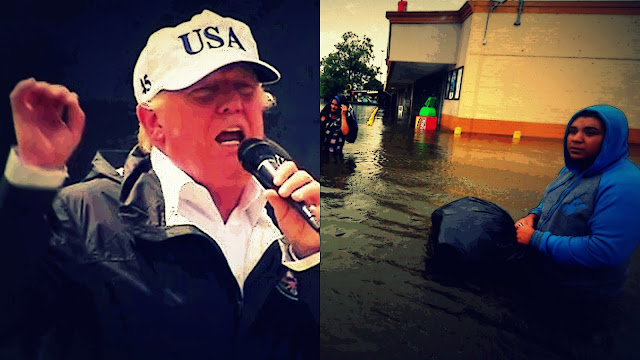 It was supposed to be an opportunity for Donald Trump to check out the damage caused by hurricane Harvey, and offer support to its many victims.

But it didn't turn out that way.

For it was a disaster from beginning to end. 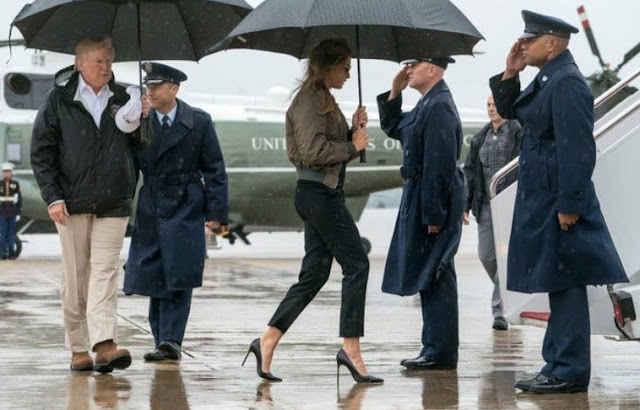 Starting with Melania Trump's decision to wear stiletto heels to a disaster zone.

And continuing with her husband's determination to make the trip and the disaster all about himself.

As rescuers continued their exhausting and heartbreaking work in southeastern Texas on Tuesday afternoon, as the rain continued to fall and a reservoir near Houston spilled over, President Trump grabbed a microphone to address hundreds of supporters who had gathered outside a firehouse near Corpus Christi and were chanting: “USA! USA! USA!”

‘Thank you, everybody,” the president said, sporting one of the white “USA” caps that are being sold on his campaign website for $40. “I just want to say: We love you. You are special. . . . What a crowd. What a turnout.”

As he has been doing since the rains started falling.

He has talked favorably about the higher television ratings that come with hurricane coverage, predicted that he will soon be congratulating himself and used 16 exclamation points in 22 often breathless tweets about the storm. But as of late Tuesday afternoon, the president had yet to mention those killed, call on other Americans to help or directly encourage donations to relief organizations.

Viewing it not as a human catastrophe, not as an opportunity to point out the dangers of climate change.

But only as Frank Bruni writes, as an opportunity to look into the mirror of his own majesty. 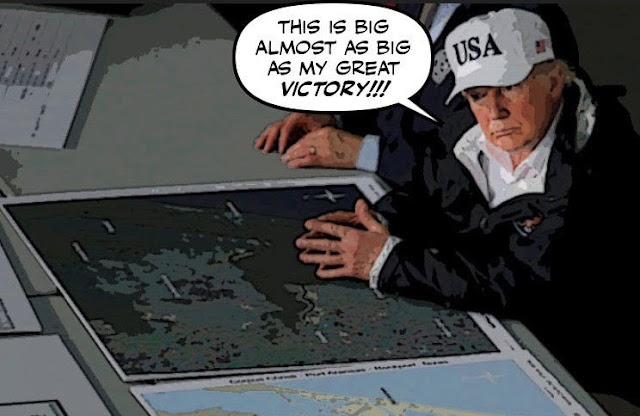 I would like to believe that what fascinated Donald Trump about the floodwaters of Texas and pulled him to the state on Tuesday were the scenes of human suffering.

I would also like to believe that I’m a dead ringer for Brad Pitt.

But what Trump saw in Hurricane Harvey was a mirror of his own majesty. A storm worthy of a stud like him. A meteorological complement to one of his resorts, rallies or steaks. Something really, really big.

Or as an opportunity to play cheap politics... 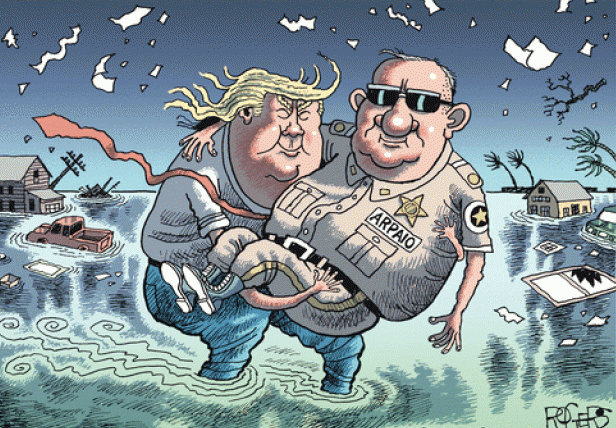 It will be days or even weeks before we can definitively appraise how well the Trump administration addressed this crisis, along with precisely what mistakes state and local officials made.

But what we know already is that Harvey didn’t blow away the opportunism and narcissism at Trump’s core. In comments at the White House on Monday, he actually suggested that he’d timed the announcement of his pardon of Joe Arpaio to coincide with the storm’s arrival, because more people were monitoring the news.

But then again why should anyone be surprised when we already know that Trump's narcissism knows no bounds. 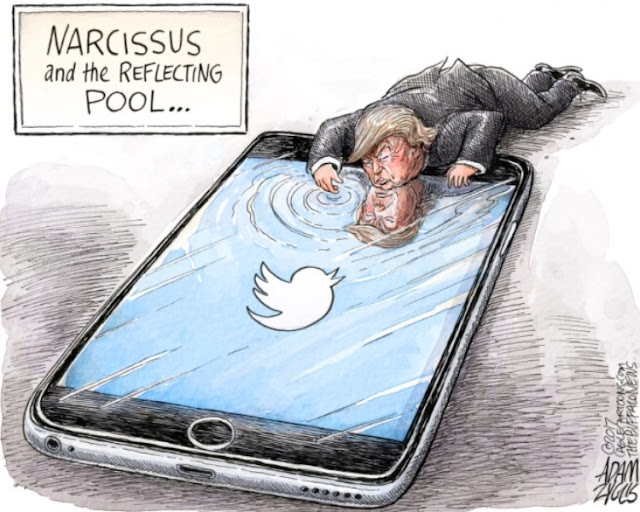 Twice a day since the beginning of the Trump administration, a special folder is prepared for the president.

These sensitive papers, described to VICE News by three current and former White House officials, are not top-secret intelligence or updates on legislative initiatives.
Instead, the folders are filled with screenshots of positive cable news chyrons (those lower-third headlines and crawls), admiring tweets, transcripts of fawning TV interviews, praise-filled news stories, and sometimes just pictures of Trump on TV looking powerful.

Which tells you all you need to know about that needy man child.

If Trump is drowning in his own ego, so are his polls.

Pew asked American adults how they felt about Trump's conduct in office: Whether they “liked” it, had “mixed feelings” or “didn't like it.” It won't surprise you to see about 6 in 10 (58 percent) don't like it; that tracks with the number of Americans who disapprove of Trump overall.

The other two pieces of the pie are where things get interesting. According to Pew, another 25 percent of American adults say they have “mixed feelings,” and just 16 percent “like” it. Only about 1 in 6 voters say they like the way Trump has conducted himself as president.

The writing is on the wall even if Trump is too dumb to see it.

The tide is going out and he's going with it... 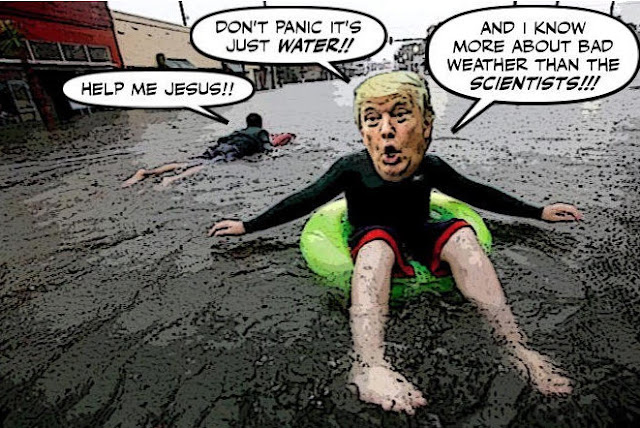 Labels: Donald Trump, Hurricane Harvey, Melania Trump, The Madness of Trump, The Rise and Fall of the Orange Oaf

You really need to stop reading NYT and the Washington Compost. It's rotting your brain.

Trump will never lose the support of his rabid base. He beat the other GOP presidential candidates soundly because it was obvious that he pissed off libruls the most with his racism, sexism, lying and outright idiotic ideas. In other words, he was most like his base. Everything Trump's done since then simply endears him to them. The GOP and the Cons exist to prove Cleek's Law: today's conservatism is the opposite of what liberals want today - updated daily.

Don't count on it.

Can you please write about the despicable Shiela "Gunner" Reid... https://www.youtube.com/watch?time_continue=187&v=f0dJUGoxwA0 and the equally gross comment section?

I am not sure that he can keep the main body if his behaviour continues to be as egregious as it has been so far with no good policies or results for that core group.

My guess is that a lot of that core are authoritarian Christian fundamentalists and they will abandon a leader who acts totally at odds with his professed ideas.

I'd say that Harper would never lose his core base of support but horrible as he was Harper was not outstandingly stupid and narcissistic as the currant US President is.

The difficulty is getting enough information to Trump's core supporters to persuade them to decamp. The US right-wing media seems to have lost all contact with reality some time ago and if all one listens to is Alex Jones, Rush Limbaugh and the Fox Fantasy Hour, one is not getting any actual news. Hell, Goebbels' would be envious.

It looks almost impossible for Trump to lose all his core supporters but I'd say it is possible, if not likely, that a significant number might reject him especially if the Republicans or even the Democrats fielded a reasonably decent candidate or set of candidates.

Hi anon....I should stop reading the two best papers in the U.S. and start reading racist rags for mouth breathing Cons like Breitfart and The Rubble? I don't think so. The NYT and the Washington Post are putting your fat fuhrer through a meat grinder and I'm enjoying every minute....:)

Hi anon 11:43....I'm sure that some members of Trump's rabid base will stay with him to the end being too dumb to know that they were suckered by a Con man. But some are already abandoning him, and when they realize that the jobs he promised them aren't coming others will too...

Hi anonycon...I'm afraid you haven't read the latest polls. It seems the Ontario economy is doing so well, the Cons and the Liberals are now tied. And while I'm not a huge fan of Kathleen Wynne, it seems that Patrick Brown's Cons are tearing each other to pieces. So as the old saying goes, don't count your chickens before they're hatched....

Hi jrkrideau...I agree with your analysis and would only add this: Trump only has to lose a very small amount of his base for him to lose any hope of winning the next election. And since many of Trump's base are elderly, it remains to be seen how many will live to see the next election...

Hi anon...Sheila "Gunner" Reid is one of the most repulsive members of the Rebel. I have been watching her growing more and more desperate as Levant's racist rag slowly goes down, and when she's reduced to screaming hysterically I will write a post just on her. I hope you will enjoy it....

I wonder who will win (and loose) the blame game once the flood waters start to recede and life slowly starts to return to normal. Logically the winners should be responsible politicians who support environmental stewardship,more responsible urban development and design to reduce the effects of mega storms. On the other hand there are those that will blame Lady Bad Luck for the 1 in 500 year storm to the Trumpites that will blame the Democrats for fostering an immoral society that invoked the wrath of God.
It will be interesting to see how successful the Con man will be in ignoring climate change effects, slashing the rebuild budget by leaving out key infrastructure upgrades and insurance support while tying approval to the Great wall yet blaming the Dems for any funding delays. This of course will depend on how many blame Lady Bad Luck and Gods revenge for the disaster versus man made pollutants.
RT

hi Jay... I remember all those deplorables who waddled around with F**k Your Feelings t-shirts. And that does seem to be the main motivation, along with racism, of Trump's rabid base. But it only reveals what scummy people they are, and can only motivate more decent Americans to destroy them...

hi RT...I expect that Trump and his followers will continue to claim that it is a one in 500 year storm. But the problem for them is that since climate change is growing worse not better, that hollow argument will only last until the next storm or the next drought. Time is not on the side of Trump and his climate change denying fanatics, and when the day of reckoning comes it's going to be brutal...

hi Mr Perfect...thank you once again. I don't like to brag about my mental state these days after six months of Trump. But luckily his dumb followers make me feel like a genius!!!