Has Donald Trump Made War Unavoidable? 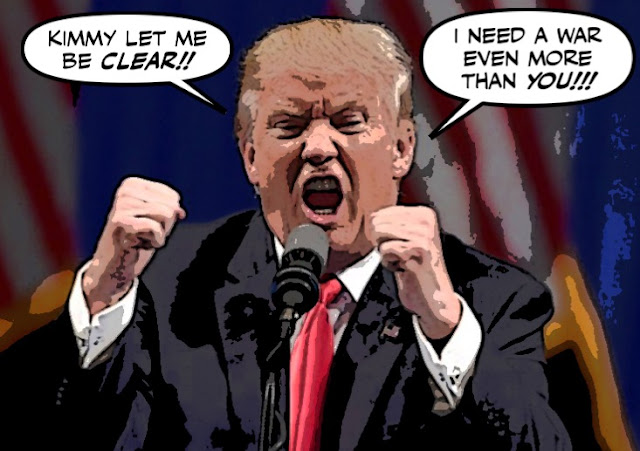 President Trump’s aides knew he planned to deliver a tough message to North Korea on Tuesday, but they did not expect a threat that rivaled the apocalyptic taunts often used by his target, Kim Jong-un.

And now we know how the North Koreans are reacting.

North Korea has announced a detailed plan to launch a salvo of ballistic missiles toward the U.S. Pacific territory of Guam, a major military hub and home to U.S. bombers.

It seems that this warning may have come at least six months too late. 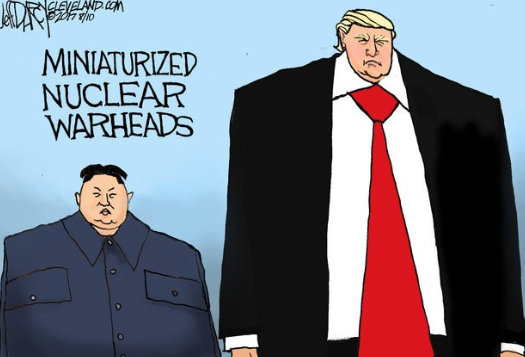 And the burning question, can war be avoided?

For I can't imagine that the U.S. will stand idly by and let the North Koreans fire missiles in the direction of Guam, without firing back, or mounting a preemptive strike.

Not when there are no good options.

And this least bad option is not likely:

Every option the United States has for dealing with North Korea is bad. But accepting it as a nuclear power may be the least bad.

As frightening as it is to contemplate a Kim regime that can successfully strike the United States, accepting such a scenario means living with things only slightly worse than they are right now.

Not when Trump might need a war as a diversion from all his other problems, and is escalating his rhetoric.

President Trump warned North Korea on Thursday that “things will happen to them like they never thought possible” should the isolated country attack the United States or its allies.

Trump told reporters here that his Tuesday statement warning of “fire and fury” may not have been “tough enough,” but even as he continued his brinksmanship with North Korean leader Kim Jong Un, the president sought to reassure anxious people around the world that he has the situation under control.

And may have threatened himself, and the rest of us, into a corner.

Mr. Trump has now blustered himself into a mortal paradox in which his threats may jeopardize any hope of a North Korean solution, while a failure to carry through on those threats could jeopardize his own position.

He now faces a humiliating choice: He will either be seen to lose, or he will trigger a circumstance in which we all lose.

But then again, what did the Americans expect by electing such a dangerous president?

And what was that dangerous president idiot tweeting or retweeting about today?


And this horribly edited, and somewhat ominous song...

Time to send in "the Worm" for some shuttle diplomacy. Rodman endorsed Trump in the 2016 election and both Kim and Trump consider him a friend. Ordinarily, this would sound crazy, but it's no crazier than Trump in the White House.

Where's the Scottish Defense League when we need them?

It'd be NSFW, but the "minature warheads" aren't exactly their heads, if you know what I mean.

Kubrick explained it fabulously in Dr. Strangelove. War is just one yuge stick-measuring contest, fought by insecure, immature men who speak loudly because they don't carry big sticks. Trump's maladministration is already fighting in the war room. We know what's next.

hi anon...I was thinking about including that in my post, but then I read what Rodman had to say:

"Kim Jong-un he's a good guy...he's my friend. You say he's a murderer...but Bill Clinton slept with his secretary and everyone's OK with that. So what's the difference?"

And I changed my mind. We do need a first-rate negotiator but he's not the one... ;)

hi anon...defending the highlands of course. And I may join them, after having read that in the event of a nuclear war, the highlands will be the safest place in Britain. Like Kim Jong-un I believe there's nothing better than an air raid shelter underneath a large mountain... ;)

hi anon...yes, I know what you mean, all the worst chickenhawks in the world have VERY small fingers. And yes, this is the latest version of Dr Strangelove, where in a shocking twist the president isn't the most rational person, he's the craziest!!!

as to your question, of course its avoidable, as long as North Korea remains adults in this. So far they do appear to be more adult about this than Trump.

North Korea has always felt the west was out to get them, and they're quite correct. They have always made some "entertaining" remarks but this time there is little Donnie in the white house and he behaves like a nut bar and he is feeding into it as if they were questioning if he can still get it up.