The Ugly Hidden Face of the Con Messiah Andrew Scheer 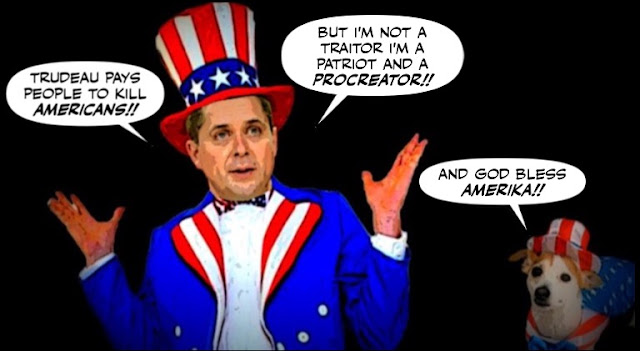 Ever since his grotesque campaign to attack Justin Trudeau by trash talking Canada blew up in his face, Andrew Scheer has been desperately trying to repair his image.

Gone with the wind, or dropped like a hot potato, is all that treasonous talk that could have stirred up the maniac Donald Trump, and cost Canada thousands and thousands of NAFTA jobs.

Now Scheer is using his family as props to try to make himself look like a nice guy.

The kind of nice guy Canadians could trust  to invite into their kitchens, unlike the Con monster Stephen Harper.

But if they did, they would be making a terrible mistake. 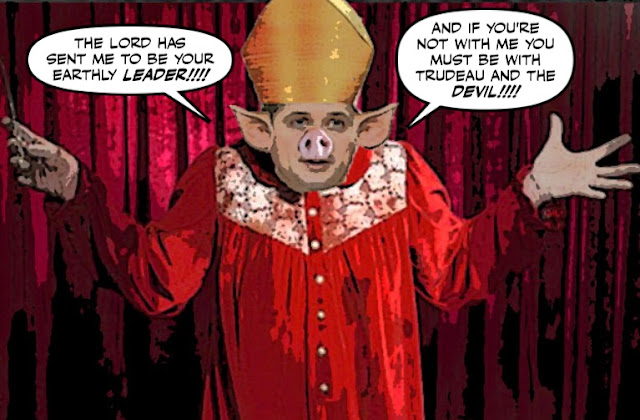 Because Scheer is no Mr Nice Guy, he's Harper with a creepy smile. And a dangerous religious fanatic who hates gay people with a passion, and is already going after women and Canadian universities.

So much for the new and improved "mild-mannered," "middle-of-the-road" Conservatives.

The Conservative Party of Canada is currently promoting an online petition vowing they'll strip funding from universities and shut down critical research projects in the name of "free speech" – something anti-abortion figures say would amount to an "enormous victory for pro-life activists across the country."

Going after women who believe that they should have the right to control their own bodies, and are more than the subservient baby machines Scheer would make them. 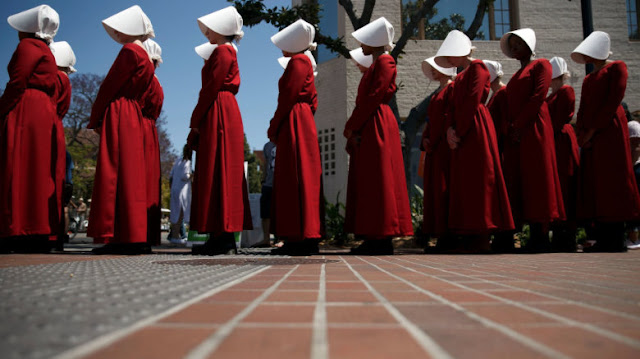 Channeling their inner-Breitbart, the Conservatives claim they want to fight "political correctness" and "protect free speech," but Scheer's past statements on the policy make clear that it is intended to empower anti-abortion activists.

Going after our universities like a Trump, or a true believer beleiver... 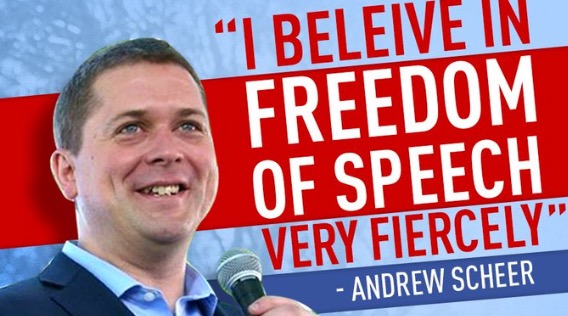 Even if those universities could be crippled by his religious extremists.

In the video, Scheer notes that he thinks it's a "cop out" to claim universities and student unions are separate entities. Would he be prepared to strip funding from Canadian cancer researchers because an obscure anti-abortion group has a grievance with their student union?

How far is Scheer willing to take all of this?

And Canadians could be hurt or even die of ignorance.

But then nobody should be surprised.

For although somebody has been trying to cover-up or delete Scheer's past...

As Michael Coren, who was once a religious fanatic himself points out, the truth cannot be buried.

And that's the trouble with Andrew Scheer.

Harper may have been a committed conservative but he was also a pragmatist; Scheer is far more theologically driven and is now heavily in electoral debt to social conservatives.

He's not only a true religious fanatic, a budding Christofascist, and a tool of social conservatives and people like Ezra Levant... 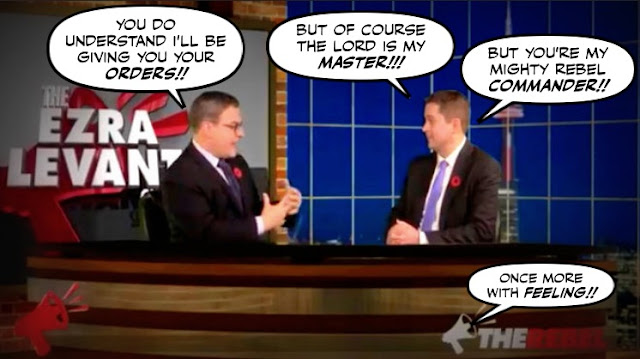 And to understand how anti-gay he is, all you have to do is read his speech during the same-sex marriage debate.

Justice La Forest is saying that marriage exists primarily for the procreation of human beings. It is the essence of marriage and its primary focus. There is nothing more important to society than the raising of children, for its very survival requires it.

Homosexual unions are by nature contradictory to this. There is no complementarity of the sexes. Two members of the same sex may use their God-given free will to engage in acts, to cohabit and to own property together. They may commit themselves to monogamy. They may pledge to remain in a loving relationship for life. In that sense they have many of the collateral features of marriage, but they do not have its inherent feature, as they cannot commit to the natural procreation of children. They cannot therefore be married.

Which makes him sound more like a priest than an MP. Even though as Lorne Nystrom once pointed out, he's a ruthless political animal, and no Mr Nice Guy. 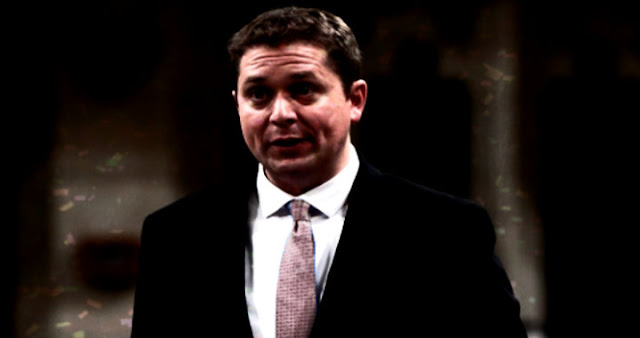 “He’s not just the big cuddly smiling teddy bear by any stretch of the imagination,” said Nystrom. While Scheer sells an image of wholesome Prairie populism, he is in fact a creature born and bred of the Ottawa machine. He has been active in right wing politics since his teens

And his contempt for LGBT Canadians and the rights of Canadian women, his creepy obsession with procreation, and his sheer or Scheer fanaticism, make him in my opinion unfit to lead a Canadian party, let alone be Prime Minister.

For while he is entitled to his religious views, a real Prime Minister reaches out to all Canadians... 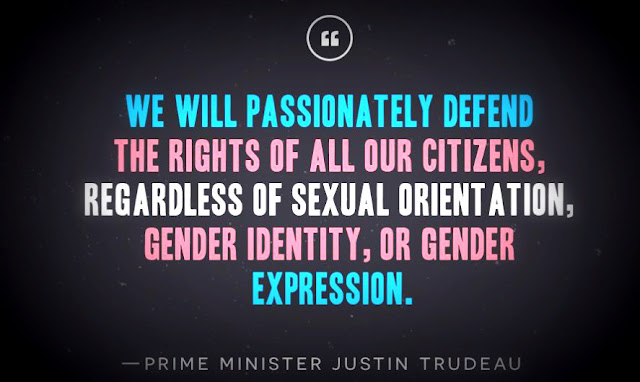 If Andrew Scheer can't do that he should resign, or move to a place like Alabama.

Or the Republic of Gilead...

For Scheer and his ugly Cons should understand one thing:

This is Canada, and it's a democracy not a theocracy.

So the ugly truth will be exposed.

And we shall use it to destroy them...

Thank you Simon for once again revealing what our Trump Party North has become. The Conservatives elected the wrong person as their leader, and they should be made to pay for that mistake.

Scheer will make us yearn for Harper. God help us all if he ever becomes Prime Minister.

Holy crap, supporting free speech on university campuses will not strip women of their right to choose.


I support free public abortions, I'm prochoice, but stripping funding from any university that doesn't allow free speech will not remove that from women.

Its seen as a victory by antichoice advocates not because it removes a woman's abortion rights, but he cause they won't get silenced unfairly any more. I don't agree with what they say, but they have a right to say it.

This isn't really about abortion, its about free speech which is under attack on university campuses and that is unexceptable.

I'll hopefully be voting for Guy Caron as PM next election, but I agree with Scheer on the importance of protecting free speech, a 100%, including for people I disagree with.

This how good vs. evil narrative as if your discussing folk tales and not complex political issues is not healthy Simone.

Scheer isn't some antichrist Hilter villian filled with hate for women, Trudeau isn't a flawless saint, both are complex individuals, with massive flaws, but also good sides (and if I can admit Trudeau has a good side, and I really don't like him, then you can admit Scheer has a good side too).

I disagree with Scheer on most things, but free speech is vital.

The Conservative leadership race was a farce, and Scheer was the result. The media might try to portray him as a winner, but as soon as the election campaign begins he will be revealed to be a loser.

The left believes in free speech, for themselves only.

hi Gyor...Andrew Scheer is a religious fanatic and a bigot, posing as something else. His so-called free speech is actually hate speech, and his threat to defund universities is actually an assault on academic freedom.
And as a Con, in the time of Trump, he will always be a villain to me...

Scheer will most likely be there for one election cycle and with any luck the party will go on to another leader. Who knows it might be Brad Wall although he did say he was out of politics. with a politician you never know.