Darth Trump and the Death Star Nightmare (The Video) 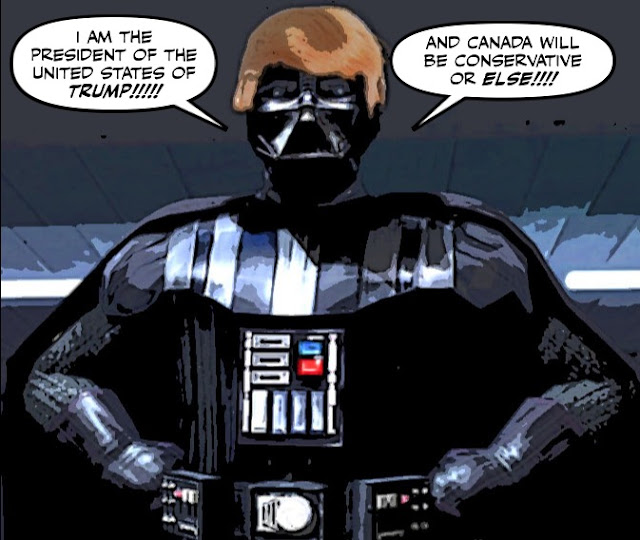 In my last post I wrote about Donald Trump and the politics of hate.

And I pointed out that Stephen Harper was our mini Trump.

Who helped set our country on fire. Before he went down in flames.

But now the ultimate nightmare.

What if that smelly bigot with the deathly comb over is Darth Trump?

And he wins the next election.

Yup. May The Force be with us.

Let's make sure the bigots are beaten.

And that every Con Death Star ends up like this one.

Over to you Great Sunny Leader. 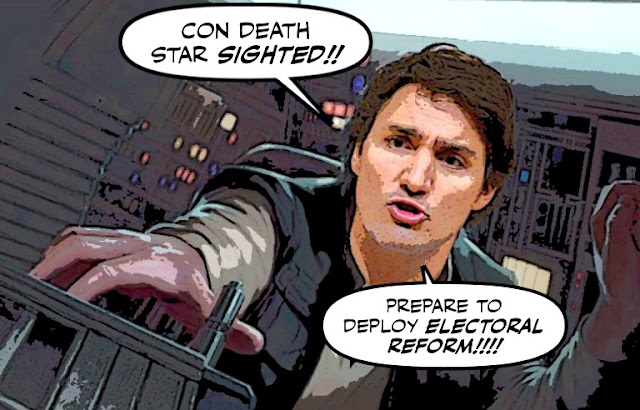 Show them no mercy.

And shoot the Cons out of the sky...

Trump is just playing the bait and switch game the Republi-Cons have been playing for years. The rabid base is a minority group so they only fire them up when extra support is required for a new nasty piece of legislation or war but on a day to day basis they have to appear moderately balanced on other issues to attract a broader following of voters.Trump has decided there are enough wing nuts in the Republican party that he can win the nomination by only pandering to them. If he wins then he can put on a slightly different face for the Presidential election.
Its just another made for TV reality show but becomes really scary when one considers how other world leaders might view the antics.Newly released documents show that Russia seriously considered a first strike attack in the 1980's as troop movements and build up on their borders at the time convinced them the Allies were preparing for war.Hard to believe that any moderately paranoid leader would not believe the same thing today after watching the Trump reality show.
RT

Given the USA's recent record of invading places just for hell of it (Iraq comes to mind), it's totally irrational disbelief in Climate Change (the GOP Congress and Senate in particular) and it's less than common sense approach to arming any and all mad-dog racists, fanatics and so on, I think that any moderately prudent leader should be just a bit nervous.

It's not surprising that Trump's fascist antics have put on the top of the dung heap. This is the same party where a significant portion of its base Teabagging base still believes that President Obama was not born in the US and part of a greater Muslim conspiracy.

The Teabaggers (aka nuts) of the GOP have really taken over and thrown the country clubbers who used to run it aside. In fact there is quite a bit of made in Canada in that organization. They used the Reform model to take over the right wing party saying many of the same things to get the power they have ("democratic reform", outsiders, no compromises with the opposition, low taxes for the rich, a fanatical devotion to the free market (whatever the hell that is) and anti-intellectualism.) Sound familiar?

Trump has taken all that and become their voice.

hi RT...I can't see Trump winning the election, and I'm predicting that he will in the end run as an independent, which by separating the tea baggers from the Republicans, will only ensure that they are defeated. What I am worried about is the violent fringe he is arousing, and which as others have pointed pointed out, could influence some of our own bigots and maniacs. As well as of course inspiring some wannabe jihadis to attack us. However, if I am wrong, and Trump does get elected, you will find me in a cave, somewhere in Patagonia... ;)

hi jrkrideau...look let's not beat around the bush. What's happening in the U.S. is absolute insanity. But its roots as you point out go way back in history, and the ISIS situation was created by the insane decision to attack Iraq. And ignorance and fear and racism are creating such a dangerous mixture I truly fear for the future of our neighbour. And I think it might be time to start working on that wall... ;)

hi Dan...you're right, Trump would never have emerged as such a popular demagogue, unless his path had been paved by the teabagger nuts. Who I note are all about guns and patriotism, but when hit by a terrorist attack carried out by TWO losers, go crazy with fear. I have pointed out that Cons have a larger amygdala or fear gland than most. And we're going to have to set-up clinics all over the south to do what we can to help shrink them, before they become even dumber and more dangerous, and threaten us further....