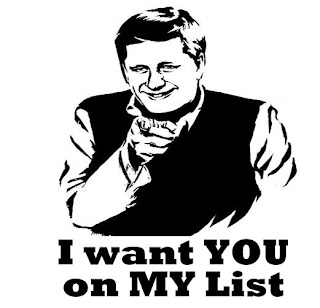 When I first read that Stephen Harper had an Enemy List I was not surprised. For it's his madness that makes him so dangerous.

But I was worried about my country and its democracy. For no democracy can survive in such an atmosphere of intimidation.

And of course, I was also worried that I was not on Great Paranoid Leader's list of enemies... real or imagined.

For how low can you go eh?

But it turns out the situation is even worse than I thought. Because as Susan Delacourt points out, we are ALL on an even larger list of his friends and enemies.

What if the government kept its list of friends and enemies on a huge, computer database, with names, addresses and personal information about millions of Canadians? And what if you had no right at all to see how you were listed?

Such a database exists. Up to now, it’s been called the Constituent Information Management System, CIMS for short, though the Conservative party is reportedly in the midst of building a better machine, called C-Vote.

And that list is as sinister as the other one. Because it doesn't just include political activists, it also targets ordinary Canadians.

If you’ve been a friend to the Conservative cause over the years, volunteering, donating or even writing nice things about Conservatives in letters to the newspaper, a yellow, smiley face appears beside your name in the database.

If, however, you have put up lawn signs for rival parties, slammed the door or hung up the phone on the Conservatives, your name appears in CIMS with a frowning red face. 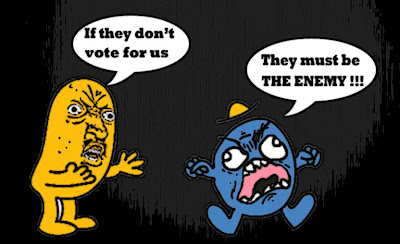 And as Delacourt points out, while other parties have their lists, the Cons are the only ones who can HURT you for not supporting them.

Michael Sona, the former Conservative staffer now facing charges in the so-called robocalls case, has said that when he worked in MPs’ offices, part of his job was inputting constituent information into CIMS. CIMS is regularly consulted by ministerial staffers when it comes to making government appointments, he said.

And since the CIMS list was used by a criminal conspiracy to try to steal an election, can you really trust the Cons not to have used it for all kinds of other evil purposes?

And of course, could you ever trust Pierre Poilievre, the new Minister of State for Democratic Reform, as far as you can spit?

And I think the answer is obvious... 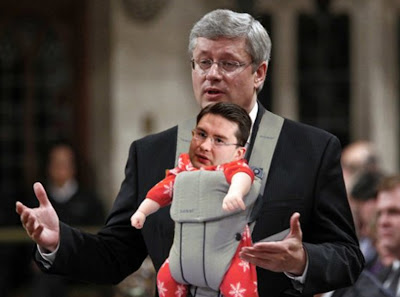 Not when he is Harper's baby, and the whole idea of turning ordinary Canadians into ENEMIES, could only have come from the depraved mind of Great Ugly Leader himself.

And the teachings of the grotesque Republican strategist Karl Rove... 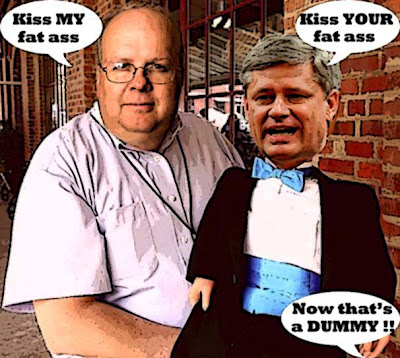 Who taught Harper and his RepubliCons everything they know about polling, wedge issues, attack ads, and all the other dirty tricks of politics in Amerika

How to corrupt the political process, how to smear your opponents, how to regard those who don't support you as The Enemy. How to change Canada into the nightmare called Harperland.

A nightmare that can only get worse, before it gets better. For it now seems pretty clear to me and others, that unless the police have other ideas, Harper isn't going quietly.

This is an impossible, not just implausible, scenario. Anyone assessing Stephen Harper’s character cannot miss the obvious. He’s a brass-knuckled street fighter with every reason to doubt the polls and no sign of a Plan B for any early retirement.

Harper has dedicated his political life to defeating Liberals and smearing the party leaders with attack ads. To meekly run away from ominous polling which, for the moment anyway, favors a Trudeau reincarnation would humiliate Harper personally and taint his fearless-leader legacy politically.

And what is also equally clear to me is that because now he's crazy desperate, he'll do ANYTHING to cling to power. And that armed with all those lists of enemies he's never been so dangerous.

Yup. Now may be a time to rest, but in the fall progressives are going to have to get serious about removing this Rovian cult and their depraved leader from power.

And the good news? It should be easier than ever to get more and more decent Canadians to join us.

Because now he doesn't just threaten some of us.

Now he doesn't just threaten the future of our country and our democracy.

Now he threatens us ALL... 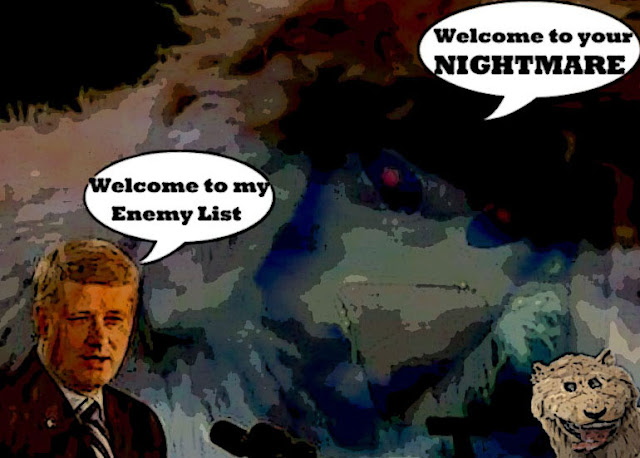 There is a documentary called "bush's brain" or something close to that. You better get your buddy Justin and all of his handlers to watch that just so they know who they're dealing with. harper's not a street fighter. he's a pussy hiding behind a psychopath with a razor sharp gutting knife who's more than happy to use it for every occasion if he's learning from rove. The Liberals are in really dire trouble if they think they can take the "high road" against rove and win. They better learn from the Sith Lord himself on how to defeat harper because nothing else will win the next 6 elections against the CON(vict)S other than to learn how they really work and to fight fire with fire. If rove could make an idiot like dubya look "preznitial", he can certainly make harper, who unfortunately is not a total moron like bush, look godlike to the simpering idiot masses here. Time's running out! Time to get tough or get tossed out on their asses with the democrats and the other so-called "progressives" in the u.s. "Have A Nice Day!" :-)

We should have gotten serious about ousting harper last summer.

How do you think we should go about it?

(There's a mother cardinal feeding her baby in the tree outside my window.)

It figures that Harper's baby, PP, owned a robo-call outfit before becoming an elected official. It fits well in the grand CONSCAM being perpetrated on our country.

Presto Manning needs to be held accountable for unleashing the horror of harper on Canada.

Incidentally, my in-laws in Calgary LIKE Stephen Harper. I think this is called "confirmation bias".

What scares me is that they might not be alone.

hi anonymous...look I agree, many people in this country are still sleepwalking, and they badly need a wakeup call. And you take a knife to a gun fight. We need to kickup more of a fuss about what this appalling regime is doing. And we simply can't sit back and take it, or they'll drive us off the high road and into the ditch, like they did with all the others. But there is a resistance movement forming out there, so I'm hoping things will get better and noisier...

hi thwap...As I think I've mentioned before at this stage what I think we need to do at this stage is two things:
(1) Get the progressive parties to take the struggle beyond the confines of Parliament.
(2) Try to build a grassroots movement that can help amplify that struggle, and encourage greater voter participation.

But right now it is the heart of our very short summer, so while I plot my next move in my hammock, see if you can train that cardinal to fly over Ottawa and shit on you know who... ;)

hi Linda...yes isn't it a small Con world? And what a coincidence. The initials PP could stand for Pierre Poilievre OR Pierre Poutine... ;)

hi anonymous...yes he was the right-wing Moses wasn't he? Things have never been the same since he led his burro army into Ottawa. And of course the Manning Institute is the brainwashing centre for the scores of young fanatics who keep the Con War Machine going. However, it also must be said that Manning warned us about Harper's unfortunate character traits long ago, and nobody listened...

hi Old Guy...it sound like you are already at minus 15. Congratulations !!!! :)
But yes, Stephen Harper's propaganda still fools so many. I'm not surprised, because they do an enormous amount of focus testing, but it's still depressing...