Robbie Burns and the Rebel Voice 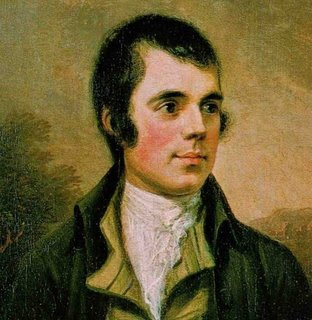 Well today was Robbie Burns Day, the most sacred day of the Old Scottish Calendar.

And no doubt all over the world the Tartan Army was drinking heavily, and eating the horrible haggis.

But not me eh?

Because although I'm extremely proud of my Scottish heritage, I don't drink, I don't touch the awful offal.

The offal in question is what was bobbing in the cauldron. It's organ meat – lamb kidneys, liver, hearts and lungs. Once they were darkly red, glistening specimens of varying texture: firm hearts; resilient, elastic kidneys; puffy, yielding lungs; glutinous liver.

And I'm more interested in the real Scotland, which is quite different than the folkloric version. And definitely more exciting.

But at least now we know what the bard really looked like.

And as someone who hails from this small but proud place, where the North Sea meets the highlands... 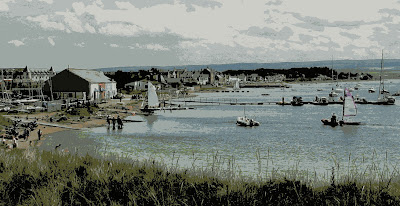 I know that in this land of poets and dreamers, and sailors and warriors, there's a Burns for EVERYONE.

And what I take from him is the rebel voice. The man who opposed slavery, and was an early supporter of the French Revolution. The man who loved the common people, and mocked the strutting powerful.

Which no doubt helps explain how I feel about that absurd little man Stephen Harper.

Why I am so quick to join every popular movement from Occupy to Idle No More.

In my search for a kinder, gentler, more just world.

And why when that poem is sung by someone from the New Scotland, like Paolo Nutini, the pride of Paisley.

So here's to Robbie Burns.

Down with the offal Cons. And the coof Harper.

Up with the rebels. And the Idle no More movement.

hi anonymous...hey c'mon give me a break, it's my Friday night. I'll get around to Bubbah Ford tomorrow. Did you see him today talking about how he had been humbled? I thought he was going to have a heart attack. And don't forget the forensic audit of his campaign expenses coming up next week. that absurd Con is coming in for a hard landing. But how strange that you bring up Ford at the end of a post about the horrible haggis. Coincidence or not? ;)

I just love how "pinko" is supposed to be some sort of deadly insult. I personally wear such terms as a badge of honour. Hey Anonymous, did you take a moment between Sun News programming and your WWE wrestling to tap that font of wisdom? Thanks for the laugh, Sweetie..

Here's one conservative voice hoping this fuck nut leaves soon so we can can a shred of dignity returned to Toronto and my home province.

This country is a bottomless pit of corruption. The contamination starts at the top, and has leaked into every nook and cranny of this Nation.

I have never been so ashamed of Canada as I have been, since Harper's so called majority. Friends and relatives in other country's know about, the give-a-way of Canada to Communist China.

I told them some names of web sites to read, during The F.N. struggle against an (unprintable). They were absolutely shocked, by the nasty, cruel comments on those news sites. I told them this is the true Canada, rotten to the core. They said it is like, Goebbels propaganda machine and, his hate speech toward the Jewish people. So I told them to read: Harper was Policy Chief for his, Northern Foundation Party of 1989. They weren't that far off.

Nah, I felt your lack of Ford bashing was cop-out. Still, can't help but snicker, so many were so sure.....so very sure.

Ah well such is life, for the left anyway.

hi anonymous...I'm afraid you're the one who hasn't a shred of dignity. Do me a favour, repeat what you wrote in front of a mirror, and then take a good look at yourself. For you should not like what you see. And since no decent person could either, you must be a very lonely loser. I should feel sorry for you, but you make it really difficult...

hi Steve...I find it very strange how the Con kooks throw Cold War terms around. Do they really still have a crush on Richard Nixon, have they forgotten it's the 21st Century, or is it just creeping dementia?

hi way Way Up...I'm sure there are people of all political persuasions who wish that Rob Ford would just go away. For the damage he is doing to Toronto is painful to behold. As a Montrealer I'm not supposed to have any feelings for Toronto eh?
But I've grown rather fond of this city, and I hate to see him slowly destroy it...

hi anonymous...you're right, a fish rots from the head down. And what Harper and his Cons are doing to this country is a real crime...

Hi Simon; Love this song, your post and your craft. Too bad Anon the 1st had to come and jump ugly on it!

hi Linda...I'm glad you liked the post and the song. It sounds a lot better than the time I was commanded to recite it, and forgot some of the words. I have a problem with foreign languages. ;)
And as for the Con troll, don't worry about him, his small and miserable life is his horrible punishment ...