Krusty Blatchford and the City of Sissies 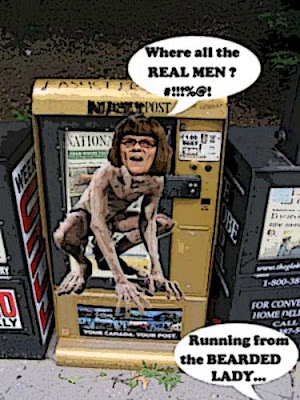 And so it came to pass that the ghastly Con scribbler Krusty Blatchford was strolling trolling through the streets the other day, when she came across a group of young boys hugging each other. Farted loudly.

And did declare Toronto to be a City of Sissies.

I know men have feelings too. I just don’t need to know much more than that. On any list of The 25 Things Every Man And Boy Should Know How To Do, hugging is not one of them. Killing bugs is. Whacking bullies is. Kissing is. Farting on cue is. Making the sound of a train in a tunnel is. Shooting a puck is. Hugging is not.

And herself to be a bearded lady...

I am wearying of men who are so frequently in touch with their feminine side they, not to mention me, have lost sight of the masculine one. I’m just plain sick of hugs, giving and getting, from just about anyone, but particularly man-to-man hugs. And the novelty of being the toughest guy in the room – and by this I mean me – is getting really old.

You know, I think this is the most disgusting article I have ever read in the MSM. It reeks of homophobia. It stereotypes a whole city. It argues for confining men to emotional cages. When so many men, particularly older ones, are already so emotionally stunted they can't even tell their sons they love them.

And the same twisted logic if applied to women, would have them trying look like Hooters' waitresses to please their manly masters. Or confine them to the kitchen, barefoot and pregnant.

But of course, for me the most disgusting thing is what she has to say about bullying.

Even though she lives in a province where gentle kids are being bullied to death in record numbers. And violence is the problem not the solution.

And how do I know that? Because I used to fight a lot, and pick fights with bullies to teach them a lesson. Until my buddy Seb, who is a martial arts expert, taught me that kind of mindless aggression only makes matters worse. And that real men can be tough and/or gentle.

But then why am I surprised eh? When only Cons and other morons could ever be fooled into thinking that the bearded one had any class. 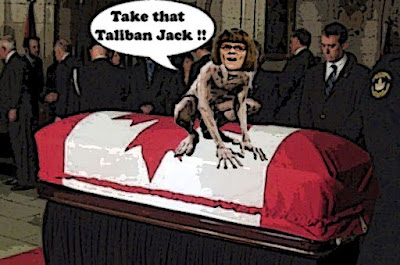 Just like nobody with an IQ higher than a plant could ever think she was a good writer.

As I approach those years, I still have no idea why it is that as one gets older, one grows more flatulent, but I do recognize it as a curious truth...

How on earth did it come to this, that despair so perfumes the air?

Or a serious journalist.

In 20 years in journalism I have never seen anything resembling the systematic and sustained repudiation to which Christie Blatchford, the Globe and Mail‘s marquee columnist, is being subjected by her own newspaper. There is room in any good paper for disagreements among colleagues, and frankly there should, for a long time now, have been room for more of that at the Globe. But this goes further. This is breathtakingly methodical. And I believe it was needed.

Instead of just a crass, ugly, bitter Con, spewing filth out of every orifice.

Yup. For the sake of all those men still trapped in life denying emotional cages, too afraid to hug their male friends to show how much they love them. As I do all the time, whether they're gay or straight.

Please write the Post, and tell them that Krusty should be FIRED...
Posted by Simon at 8:14 PM

Well that column was certainly unenlightened to say the least. At work we've worked hard to develop a nature of caring because there are literally tons of things that can kill a man (or woman) pretty darn quick. I'm offended that how a guy thinks is unimportant to her and a man's feelings don't matter. As a foreman I need to know the guys' state of mind and how they are feeling. It affects not only their own work but everyone else around them. Not caring is simply not an option. It's a good way to get seriously hurt or killed. Hopefully this makes sense....I had to shovel a hell of a lot of Alberta snow this morning so I'm a tad tired.

I want my son to grow up knowing its okay to express his feelings and not be some unfeeling robot.

Blatchford's writing here really de-humanizes males and I find it quite disgusting.

Ah... Simon. Apparently appealing to the lords of the rag does no good. We read her. And in reading her our eyes are cast upon the flashing blinking ads alongside her evermore redundant columns.

That I intentionally will not buy anything advertised against her bullshit has apparently not registered with the pulp lords.

She is indeed one sorry creature.

hi Way Way Up...you know I'm starting to think that behind that tough facade is a really nice guy. ;)
And your son is lucky to have you for a father. I think it's tragic how so many men have been taught to stifle their feelings. I have seen so many men struggling to try to express those feelings and failing even when they have only weeks to live.
Whether in the army or on a construction site good leaders need to be sensitive to the humanity of those they lead, and those who are get the best results.
And yes, I should have used the word "de-humanizes" myself because that's exactly what Blatchford is proposing.
As for all that snow...I'm sorry about that, and I'm sure you'd LOVE to know that we haven't seen a snow flake here. So please shovel one for me ... :)

hi Dave...yes I know I should just ignore that wretched scribbler. Like her equally hideous counterpart Margaret Wente, she just writes what she does to provoke decent people.
But this column, even by her very low standards, was so outrageously ugly, I just couldn't resist. Besides I'm rather fond of my little gollum blotch, and I was looking a good excuse to use it... :)

"Do not mistake this as a plea for head-banging in sport, a defence of bullies, or a veiled anti-gay message. I have no particular fondness for gratuitous roughness in games, no time for bullies at all, and as a downtowner, I live surrounded by gay men, who, like most women, I adore as a group."

As a gay man I find the bearded lady doth protest too much. Her column reminds me of the homophobia you used to find in Toronto twenty years ago.
She really should retire before she does anymore damage to herself and her paper.

hi anonymous...As I wrote in my post Blatchford's article reeked of homophobia. And this line was a classic:
I live surrounded by gay men, who, like most women, I adore as a group."
I mean she couldn't even say that "some of my best friends are gay."
And she couldn't be more patronizing if she tried...

P.S. On the other hand she does suggest she's the most macho guy in Toronto. And after taking another look at her most recent picture, she just might pull it off... ;)