Stephen Harper and the Pipeline Debacle 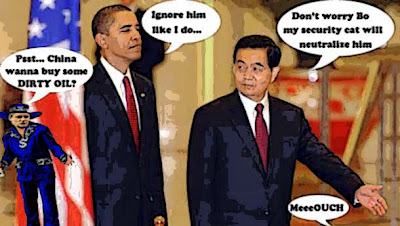 Oh no. How embarrassing. I see Stephen Harper was doing the hula hula in Hawaii today, trying to get Obama to change his mind about the Keystone XL pipeline. Because he said it was a "no brainer" so now he looks like an IDIOT.

And so does little Jimbo Flaherty.

Finance Minister Jim Flaherty said Friday that the delay may kill project and could add momentum to efforts to open up the Asian market for Canadian oil.

“It may mean that we may have to move quickly to ensure that we can export our oil to Asia through British Columbia,” Flaherty told Bloomberg.

Oh yeah. I'm sure that will work. BC would LOVE to have hundreds of Exxon tankers bobbing off its fragile coastline. And with all those native treaties...and the Rockies... to negotiate, how long does he think that might take before the window closes?

Gawd. Somebody find a tiny pipeline so we can give little Jimbo an oily enema.

But seriously eh? You'd think the Cons could see the writing on the wall. Or at least deal with reality:

(1) Did they really think that in an election year Obama would turn his back on his powerful friends in the environmental movement, and favour his most powerful right-wing enemies?

(2) Did they think they could get away with claiming that the pipeline had received an honest environmental review?

The State Department assigned an important environmental impact study of the proposed Keystone XL pipeline to a company with financial ties to the pipeline operator, flouting the intent of a federal law meant to ensure an impartial environmental analysis of major projects.

The Journal says building the pipeline would create 20,000 jobs...But TransCanada's own data supplied to the State Department says 2,500-4,650 jobs would be created.

(4) When they claim that dirty oil is "ethical oil" do they think we're all dummies?

"The whole notion of ethical oil sets up a false dilemma because the very viscous Canadian crude needs to be cut with lighter oils from places like Saudi Arabia in order to be transported down a pipeline, says Chris MacDonald, a visiting scholar for the Clarkson Centre for Business Ethics at the University of Toronto... So what's the point of having ethical oil if you are mixing it with this 'conflict oil'?"

Golly. Good question eh? Now can we call them Saudi Alberta? And does this gorgeous redhead know? 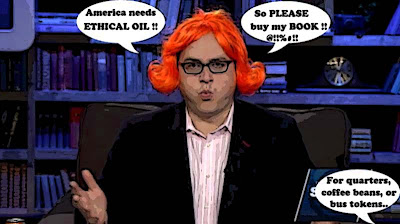 (5) How long did they think they could fool Canadians into thinking that our economy is riding high on a sea of oil? When we're actually drowning in it, because the dirty oil pimps in Alberta are destroying our manufacturing sector.

“Productivity gains are a positive story, but the sadder story is that Canada has been pricing itself out of manufacturing as resource industries’ success drives up our currency...”

(6) When will the Cons finally understand that dirty oil is REALLY bad for the planet?

And that slowing down the development of the Tar Sands is good for Alberta, good for Canada, and good for the whole world.

So how do you think the meeting between Harper and Obama went today?

But probably not well... 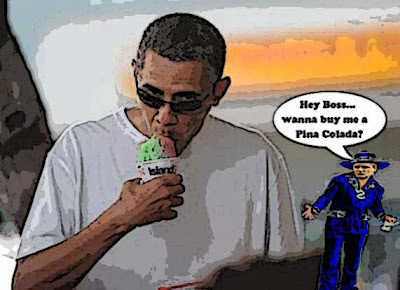 The consensus here in Fort Mac appears to be that a pipeline will be built eventually regardless of what roadblocks may crop up.

..a pipeline will be built eventually regardless of what roadblocks may crop up.

That northern Albertan sludge is only a viable product when the price of a barrel of oil is high. Now, conventional thinking says that high oil prices are here to stay, but that is sheer speculation. As I write this, WTI crude is down $1.12 and trading at a little less then $98 a barrel. If the world barrel price were to drop to say $75 (or lower), that would make the investment involved in a bitumen pipeline not particularly attractive. To say this pipeline will be built regardless, is a pipe dream.

It is not up the Fort Mac to make decisions with the pipeline. It the decisions of all Canadians of whether they will support it & where the pipe line travels through as well as the USA and a whole lot on Obama and not Harper and Flaherty who is way over is head as a credible Finance Minister.

Whether Harper supports the pipeline is not the question. It is at what cost to the water supplies, and the environment in Canada as well as the US.
Harper can flap his gums all he wants but Alberta is but one province and no more.
As for Harper, he is a boy child unfit to be leader of Canada.

The pipeline may be built and in a sense maybe a good thing BUT should never be built if it costs Canada and the USA their water supplies and their environment.

The operative word here is "if".

hi Way Way Up...the pipeline may be built, I'm an idiot savant not a prophet. ;) But all I'm trying to do here is introduce some facts into the debate. Because the Cons and TransCanada have been, as they say in Texas, all hat and no cattle.
And, as I said in my post, I still believe that reducing the mad rate of development is good for Alberta, good for Canada, and good for the planet...

hi Omar...that's a good point. Also, time stands still for nobody. The development of green industries is progressing all over the world, and China is a world leader. Once I had a cassette collection, now I can't play them anywhere...

As for Harper, he is a boy child unfit to be leader of Canada.

You mean Pugsley from the Addams family or baby Nosferatu? ;)

Then they finally understand the hardships countless other communities in this country are feeling, and maybe become a little more sympathetic to movements like Occupy?

The same thing that happened on the west coast with the softwood lumber deal that Harper & Company negotiated with the USA. It practically bankrupted the cites and towns who depended on their logging industry and mills to support their town. Ft Mac would be in the same boat and maybe a good thing as it would hopefully open their blinded eyes to the jobs all over Canada and their citizens who have homes they cannot sell and heading to Ft Mac to earn a living in an open pit stink hole polluting the surrounding areas water supplies

Alberta is for Alberta and to hell with the rest of Canada. USA political style with frigging Harper & Flaherty steering the country to bankruptcy such as we see in the USA.

Indeed, people here understand hardships elsewhere. That is why for the past number of years Fort McMurray has become one of the most generous of donators to organizations like United Way.

Nice answer.....Fort McMurray would just be in the same boat as other cities and towns in this country. Sounds very well thought out to me.

Finally, most of the new developments are "in situ" projects, certainly not the open pit stinking holes you suggest.