Margaret Wente and the Occupy Movement 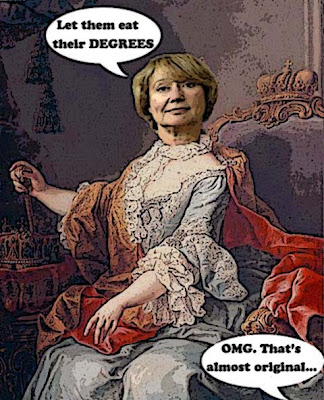 Oh my Con Majesty. I see that Margaret Wente is channelling her inner Marie Antoinette again, and declaring that the members of the Occupy movement shouldn't blame the rich. They should blame themselves.

Ms. O’Gorman is in a fix. But I can’t help wondering whether she, and not the greedy Wall Street bankers, is the author of her own misfortune. Just what kind of jobs did she imagine are on offer for freshly minted sociology graduates? Did she bother to ask? Did it occur to her that it might be a good idea to figure out how to support her children before she had them?

But then she would.

Because you gotta be rich to survive on an MA in English eh? Even the guy who cleans the toilet at work has one of those, and he's going nowhere. So much for eating your degree. Let HER eat a donut.

Besides how ignorant can a wannabe bourgeois be? Doesn't she even read the fat cat business section of her own newspaper?

A second report, from the Pew Charitable Trusts, notes that by the third quarter of this year, about 32 per cent of America's 14 million unemployed had been without jobs for a year or longer. This spans age groups, EDUCATION LEVELS and industries.

Oh well. At least the bit about the victims eating their degrees, or their children, is almost original.

And her crassness should make her really popular on Bay Street. Or in the wealthy America she came from.

Can't you just see her leaning out of her magnificent palace small condo. And shouting "let them flip hamburgers !!!!!!!"

Gawd. Somebody put a tutu on her  ridiculous Con Majesty.

Take her to the bourgeois ball...

And of course, let her eat PEANUTS.

How absurd can she be?

Hi Simon, Great job on the art work lol. I'm eternally surprised that the queen of plagiarism even a writing gig with which to bore us, but I guess privilege has it's privileges.

Many in the media pretend not to understand what is afoot here,but the fact is they understand all to well and feel threatened by the occupiers and what they represent hence their attempts at discrediting and ridiculing the movement.

Thankfully they are on the wrong side of history on this one as we are on the cusp of a new age, a better world.

Some time ago i gave up reading both the Globe in general and Margaret Wente in particular. Because of your post, I read her most recent column, and I can see that nothing has changed in her universe, surely a bizarro one in which those who practice critical thinking rather than embrace platitudes are objects of contempt and derision, as are those who hope, through their work, to make the world a slightly better place.

Judging by the over 1400 readers' comments in response to the article,most of them critical of her position, it is clear that Wente is writing for herself and a select group of true believers, who divide the world into those who earn a living by being properly trained, and those who aspire to a living that has meaning.

How CONdescending of her..

Wente's right though. In an era when our economists are championing the elimination of full-time work for the majority, social science and humanities degrees are a recipe for debt and nothing more.

Wente also knows that there's only so much wingnut welfare to go around, and being completely talentless and stupid (but with a degree of low cunning)she knows she has to double-down on insulting the social justice crowd for her pay-masters or she'll soon find herself out on the street trying to figure out how to operate a cash-register (and failing miserably at it).

hi Kev...I'm glad you liked my Marie Antoinette creation. I rushed it a bit as usual, but I think I captured her colossal arrogance, and crass Wenteness. ;)
I've read many condescending put downs of the Occupy movement, but that one was the limit.
And yes, they are threatened by the movement and they are on the wrong side of history...

hi Lorne...I tried to stop reading her after she started going on about how many Manolo shoes she had, but with the prominent play the Globe gives her crumby columns sometimes it's unavoidable.
But thanks for letting me know that most of the many comments were negative. I stopped reading the Globe comments long ago since I felt they were both insulting my intelligence, threatening my mental stability, and clouding my view of this country. So knowing that a lot of people share my view of Wente horseshit is definitely encouraging... ;)

hi Rev Effect...yes CON is the right word. She's been impersonating a serious columnist, and conning people for years... ;)

hi anonymous...yes I agree that degrees in subjects other than how to shuffle stocks, and sell Canada out to the highest bidder are practically useless these days. And to be fair the expectations of our poor youth are completely unrealistic. I read a poll recently that suggested that many teenagers believe they'll be making about $90-thousand by the time they are thirty. So it's going to be a cruel awakening...

P.S. I don't believe that Wente is capable of handling a cash register. I predict that when she finally loses her job, she'll be standing on a street corner selling wormy apples, bitter lemons, and of course peanuts ... :)

Wente takes a "John" to the protests:

I thought university was supposed to bevelop your mind and ciritical judgment, not just make you a useful pawn for capitalism.

I was wrong. They removed philosophy courses in cégep.

Too much thoughtcrime, I guess.