Are Israel and the U.S. About to Attack Iran? 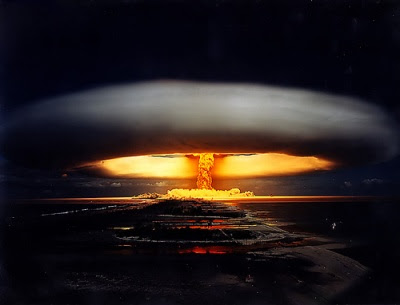 The Guardian seems to think so.

The Ministry of Defence believes the US may decide to fast-forward plans for targeted missile strikes at some key Iranian facilities. British officials say that if Washington presses ahead it will seek, and receive, UK military help for any mission, despite some deep reservations within the coalition government.

And in Israel Benjamin Netanyahu is apparently seeking cabinet approval for a strike.

And testing a nuclear missile.

Israel test-fired a ballistic missile from a military base in central Israel on Wednesday, Israel Radio said.

The report said the launch was carried out from the Palmachim facility. It quoted a Defence Ministry statement as saying the launch was aimed at testing the missile's propulsion system. Israel has Jericho missiles widely believed to be capable of carrying nuclear warheads.

Can you imagine what might happen with the world teetering on the edge of a new and brutal recession? Especially since the Iranians would no doubt attack the Saudi oil fields. Which would require further military action, and would almost certainly unleash a new wave of terrorism on countries supporting the attack on its nuclear facilities.

And do you think Stephen Harper would keep Canada on the sidelines, when his government is practically a tool of the Netanyahu settler regime?

You know I think it's about time that Occupy Wall Street (OWS) changed it's name to (OSW) or Operation Save the World.

Because forget that little economic crisis, I think I can hear the horsemen of the Apocalypse.

Labels: Iran, Israel, nuclear, The End of the World

All signs are indeed pointing to a strike on Iran. This suggests the Pentagon figures it can also prevent Iran from retaliating by closing the Persian Gulf to tanker traffic. That would require a pretty massive effort with probably weeks of airstrikes on nuclear and military targets throughout Iran.

It would also kill off the opposition movement within Iran. A foreign attack would send that group rallying back to the central government in Tehran.

I don't know if the Muslim world can stand another American military intervention. It would certainly fuel the radicalism that led to the 9/11 attacks just as US influence in the region is being displaced by other powers, notably China.

Meanwhile the US, which can't fund social security properly, is budgeting nearly 800-billion dollars in spending to revitalize America's nuclear arsenal. China, Russia, India, Pakistan and Israel are following suit. India has deployed its first indigenous nuclear missile sub. Israel is expanding its nuclear-cruise missile submarine fleet. Everyone seems to be going for their guns.

The Fifth Fleet is in the Sea of Onan and the Persian Gulf, so yeah, I think we can expect to turn on cnn within the next few weeks and watch innocent civilians getting bombed. I don't know if you've looked, but the cities and architecture and the farms and the people are absolutely gorgeous. The IAEA report has been leaked on purpose and this will be used.I like your OWS definition better.

It will be on November 9, during the Emergency Alert System test (all comm in US shut down), and they will blame Elenin or YU55 (or a combination of both)

I don't doubt there will be a war with Iran. We have heard the rumblings for quite some time. Harper has said harsh words to Iran, in the past.

Canada is one hell of a vast country, to try and defend. If China and Russia defend Iran, Canada is done like toast.

Harper's big mouth and being a war monger, could get us into a hell of a lot of trouble. Canada has vast natural resources. Both Russia and China, would love to own Canada. Russia would take the high Arctic and the Territories and China would take the rest of Canada.

We were warned what would happen to Canada, if Harper won a majority. Our worst nightmare, could be coming true.

Pretty chilling stuff. With everything that's building up, OWS protests growing, Wars in Iraq, Afghanistan, Libya, threat of war with Iran, and as you mentioned a major recession around the corner.... something's got to give!

Someone should do a tally of all the dead all these wars against predominantly Islamic nations has resulted in. To me, it seems to be a brutal form of ethnic cleansing of more than one region.

hi Mound of Sound...yes I think you've got it exactly right. And don't forget that Hezbollah would almost certainly attack Israel, and rising oil prices would damage the U.S. economy.
I think an Israeli military analyst said it best. You can know how it will begin, but who knows how it will end?
It all sounds like insanity to me...

hi anonymous...I hope calmer heads will prevail, or that it's just a giant bluff. Because if it isn't we're all in trouble. And yes OSW before it's too late...

hi liberal supporter...now it's starting to sound like the movie Seven Days in May. I don't know if you've seen that movie but it's really scary. And with an Iranian terrorist threat, which would almost certainly follow an attack, can you imagine what kind of police state we might find ourselves living in?

hi anonymous...combine Harper's desire to be seen as the saviour of Israel, so the Messiah can land there when he returns, and his absurd belligerence, and I suggest you start building a bomb proof shelter. I am...

hi Rev Effect...I'm afraid you're right. If there's one thing we don't need at this critical time, it's another war. We just can't seem to do without them, and unless sanity prevails, who knows what could happen?
OK now I'm closing my eyes and my ears and retreating to my shelter. Tell me when it's over... ;)

hi Beijing... I just can't believe that as soon as one war ends another begins. And the way the British seem so eager to join in is deeply disturbing. But then for Cameron and the other Con klowns war is the Great Distraction...

Simon, you should get your hands on Andrew Bacevich's "The New American Militarism." A career US Army combat officer, he came to his senses after retirement. Now he's a professor, even teaching at West Point.

Bacevich details the incestuous relationship that has evolved incorporating neo-liberal ideologues, the US military, the military/industrial/mercenary warfighting industry and the fundamentalist Christian movement and how they have merged to transform America into a true warfare state. He repeatedly drives home the point that, in contemporary America, military force has ousted diplomacy as the principle instrument of foreign policy.

hi Mound...thanks for the recommendation. I will definitely look that book up. I've always blamed the military industrial complex, the one Eisenhower warned us about, because it needs wars to feed its business. But Bacevich makes it sound even more sinister. You think they might have learned something from the Mayans and the Romans...