Why the Occupy Movement Will Survive 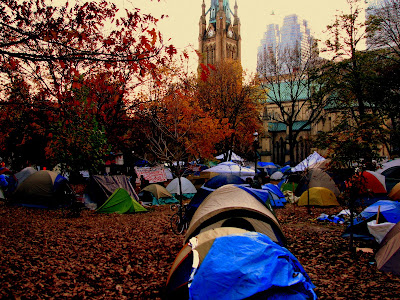 It's going to be a cold night at the Occupy Toronto campsite, as the clock on the church that has refused the occupiers sanctuary, counts down the hours before they are evicted.

Because you don't have to ask yourself what would Jesus do eh? Or be a weatherman, to know that a cold wind is blowing.

Not only is the hanging judge in fine fettle, the right-wing rabble is in a frigging frenzy, some neighbours are outraged their dogs don't have enough room in the park to shit, and some old lefties are comparing the Occupy movement to Jonestown.

We will see whether the legions of activists seduced by the likes of Princeton University professor Cornel West ("It's a democratic process, it's a non-violent process, but it is a revolution") will be allowed to remember Occupism's anti-democratic belligerence, its violence, its provocations, the weird call-and-response rituals, the shouted incantations and the dead junkies, or whether all that will be expunged from the popular culture's collective memory.

Jim Jones? Huey Newton? Walter Mondale? Our provocations? Our violence? What century or what reality is he living in? The silly old geezer.

With pepper spray instead of Kool-Aid... 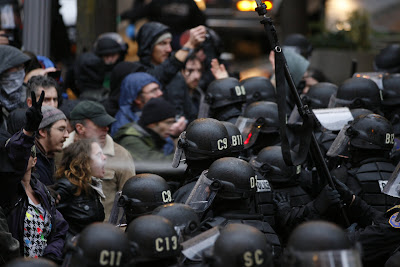 Or the violence of a police state? Defending the interests of the wealthy and the comfortable.

And who is the good comfortable professor channelling? Stephen Harper, Rob Ford, or  Marie Antoinette?

One of the great failings of the elites has always been an inability to recognize the boiling point. Marie Antoinette was carted off to the guillotine. New York was brought to its knees by the 1863 riots. The hippies ended the Vietnam War. The Occupy movement is easy enough to laugh off now, but when we reach the point where average, hard-working people realize that can’t even raise their own families, the tide may reverse like a tsunami.

Do our enemies, really think we're going to give up so easily? 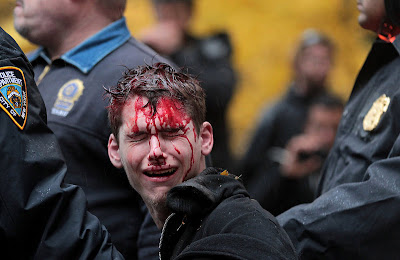 Or that we're not prepared to be beaten or arrested. 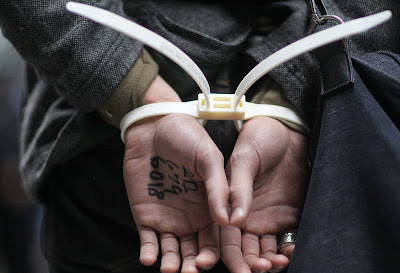 To try to stop the grunting greedsters from turning our society into a jungle, and torching the planet.

Do they think we are not smart enough to take our movement to another level?

It is time to move into phase 2 of #occupywallstreet. Whether that means supporting certain policy ideas, running our own candidates for office, putting pressure on politicians and corporations, whether this goes one way or another I can not say, but that change is coming whether the corrupt status quo wants it or not. Whose Democracy? Our Democracy! Whose streets? Our streets!

Do they really think it's the beginning of the end, instead of the end of the BEGINNING?

If they do, they don't know us. 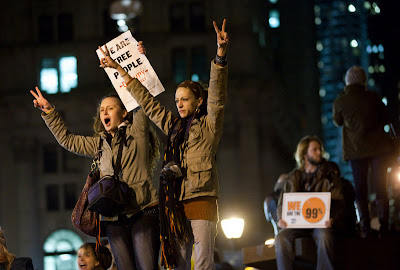 Cynics will laugh at me for saying this, and the loyalists will call me a dirty hippie and a criminal and all the other things they have grown fond of calling us. But these people do not matter. To history, they will be irrelevant. To history, there is only you. Ignore the loyalists, ignore the cynics, keep fighting. Shut them down. Shut the entire god damn system down. No one can stop this. I love you all.

The movement will survive the destruction of its camps because WE will make sure it does. 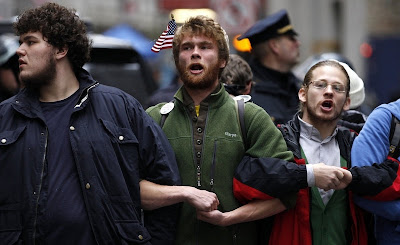 The capitalist pigs, and the Cons, and the broken lefties who suckle their sagging tits, can eat my shorts. Or choke in their own bitter bile.

How dare they insult us. Who do they think we are? 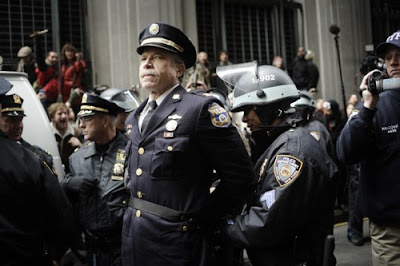 When will they ever learn? We are the 99 95 percent. Which is still more than them.

How often must I sing this song?

Or we will change the world.

Or they will DESTROY it...

Terry Glavin is a fucking moron.

Glavin of Afghanistania hasn't been a "lefty" for years. The Occupy Movement will outlive him and all the other reactionaries who mock it now.

The "movement" in one form or another will persist. Whether it's a continuation of the "occupy" phenomenon or one or more alternate forms, it will continue as long as the conditions and grievances that fuel it remain in force. It is just part of a much larger, global rejection of an economic, social and political reality that is increasingly dysfunctional and serves well the very few but only at the real and direct cost of the great many.

Simon, we live in a civilization that keeps running into walls.

These are the boundaries of any finite biosphere. We simply can't live larger than our planet.

We've been very good at parlour games, conjuring tricks, sleight of hand to delude ourselves into believing we can defy gravity but at enormous cost.

Running into ecological red is manifesting itself in desertification, deforestation, the depletion of renewable resources and exhaustion of non-renewables, species extinction and the migration of pests and disease. The waiter has shown up with the bill and we don't have that kind of money in our wallets.

Of course the movement will survive until our civilization accepts it must do what is necessary to live within our planetary means and that is going to require a profoundly new order, one based on equitable principles instead of 18th century capitalism, 19th century industrialism and 20th century geopolitics.

hi Mound...I must admit I have been a bit discouraged by the way things have turned out so far. But I agree with everything you say. The occupy movement will continue in one form or another, not just because we want it to, but because it has to if human society is going to survive...