The Occupy Movement and the Coal Mine Canaries 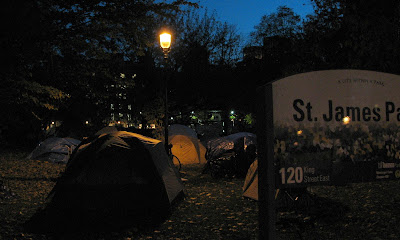 By the time I made it down to the Occupy Toronto campsite this weekend it was getting dark. There seemed to be more tents than ever, but although they were celebrating their one-month anniversary, the mood was definitely subdued.

Maybe it's because they can see the writing on the wall.

Maybe it's because many of the 500 or so occupiers are poorer and more desperate than the ones at the beginning.

You can see it in the hungry faces of the people getting something to eat at the food tent... 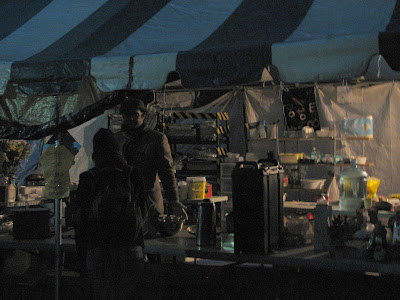 The night I was there the heroic volunteers were handing out hot chili, soup, and apples.

And the people they are feeding now include quite a few homeless kids. The director of a nearby mission said ten percent of his young clients, some with substance abuse problems, had moved into the campsite.

And not all of them share the gentle, patient ideals of the Occupy movement... 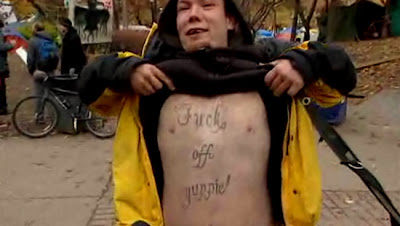 As I found out myself, the hard way, when one of the ragged young band approached me and said:

"Jesus Christ dude I'm LOADED. You don't have a cigarette do you?"

And when I gave him my last one he said:

And when I said "Why do you ask that?" he replied:

And then loudly, so everybody could hear: " I wouldn't be in this fucking place if I had ANYWHERE else to go !!!! "

Later, my friend Callum who was with me, said I should have smacked the little sod for biting the hand that feeds him. And for mooching our last smoke.

But how could I be angry with that poor kid? When he's one of the reasons we need an Occupy movement.

You know, I'm glad the occupiers have welcomed the street kids and other marginalized people into their campsites. How could they not?

But trying to figure out how to make a better world, while dealing with the social problems of this one, in a crowded campsite, is taking its toll... 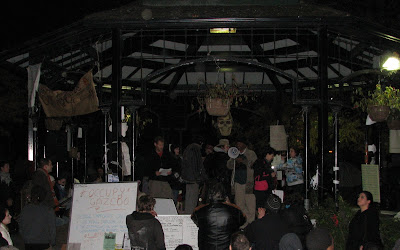 At the Gazebo on the night I visited, they were trying to come up with a list of 10 demands. But it wasn't easy when there were so many different and desperate voices clamouring to be heard. And I couldn't help feeling that weariness is replacing optimism.

The good news is that even if this campsite is demolished as I'm sure they all will be, Canada is a barren ground for anything young to grow, it will NOT be the beginning of the end. Only the end of the beginning.

The savage capitalist beast has been gored. As economic conditions deteriorate the wound in its side will only grow bigger, until the beast is bleeding from every orifice. Even as it sets the world on fire.

And this movement really is a harbinger of a very different future. The  canary in the coal mine..

There were those of us who actually bought into the whole hippie thing. We thought we could change the world and make it a kinder, gentler place where people would treat each other with dignity and respect. We thought that was what the world was going to look like as we moved into the future.

And that’s what the Occupy movement is all about. Its members are people who can see the future and who want to change it. Just like the hippies, who were like the canary in the coal mine. When they died – and die they did – we should have seen the so-called writing on the wall. We should have known there was poison in the air. But we didn’t get it. And the results are all around us. If you don’t believe me, take a look.

It really is too big to fail. And there is a whole world to occupy.

When I left the campsite a young woman was delivering her message accompanied by a group of others with guitars and drums... 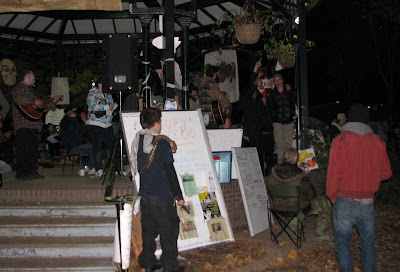 While next to the stage a member of the ragged young band quietly played a flute, that he carries like a weapon on his back.

Look at them now while they are still there, and remember this:  you can mock  them, you can tear down their campsites, you can arrest them, you can hurt them.

But you can't arrest an idea, or kill a movement,  whose time has finally come...
Posted by Simon at 10:17 PM

This was inevitable, the writing was on the wall that the cops were eventually going to invade the camps and shut them down, but it's by no means a defeat. Occupy is now a household word and topics like the movement itself, corporate greed, inequality, and political corruption, have found their way into everyday conversation. We also forced the MSM to cover a story that they so desperately wanted to bury.

I'd say the seeds have been sown.

I was skeptical from the beginning.

But I also participated.

And I really didn't have the time to do so.

The main thing is that a lot of people are uninformed and they need things presented in stark truths AND (most importantly) they need some clear idea about how things are supposed to change and what is going to be demanded of them.

Meanwhile, the activist left seems stuck in a rut. Somehow, "protesting" is going to convince greed-heads and murderous psychopaths to sacrifice their own power.

The road ahead is difficult, and we're still sitting around arguing about how we're going to get started.

I do think the movement did achieve getting key concerns out in the public square. Like Rev said, suddenly terms/concepts like income inequality, class struggle, corporate control, government corruption... were actually getting some airplay in the mainstream media. Reluctantly so but they couldn't ignore the story when the occupiers stayed on for weeks and weeks. Where to next is a very good question.

hi Cathie...thank you. I know the Con media are already writing obituaries for the Occupy movement. But I have never been so inspired in my life, and I'm happy to inform those Cons that this movement is very much alive... :)

hi Rev Effect...yes it is time to think of new directions, and I can report that a lot of people in the Occupy movement are doing just that. By cracking down on the camps our enemies have actually done us a great favour.
They have forced us to stop fixating on occupying a campsite, or a physical space, so the movement can move indoors and prepare for Phase 2 which will be even greater than Phase One.
And yes many seeds have been sown all over the world, and if we tend them carefully they will grow into huge trees. I always loved the story of Jack and the Beanstalk but this one will be even better...with a capitalist pig instead of a giant... :)

hi Thwap...I know what you mean. I'm not exactly a patient guy myself. ;)
But I'm working on it and something struck me today. The camps were challenging places, but they were great places for a movement to be born, and they have attracted more media attention than we could have ever imagined, and like the manger in Bethlehem they will become part of a myth that will one day shake the world. One hundred years from now I am sure that there will be plaques where they once stood, and future generations will tell their kids that this is where it all began...

hi Beijing...yes I completely agree with you. The occupiers have managed to raise questions about our society that nobody in my life has ever raised before. Those questions are out there now and I haven't the slightest doubt that the movement will find ways to grow. When I wrote this post I was worried that maybe I was sounding too negative. Because I really should have added that even with the social problems they have been forced to deal with, they are still the most amazing collection of progressives I have ever met. And they will do great things...

Re: a plaque for the Occupy camp?

It could go with the bust or Robert Gourlay:

If memory serves, he was personally a bit of a nutbar, but without people like him, other people tend to believe that their pragmatic apathy and conformity is the best response to unjust power.

hi Thwap...Wow. That's amazing. I've stood next to that statue which is right next to the Gazebo so many times, and I never thought to wonder who he was. And a Scot too !!!! May the Highland Gods forgive me. But how appropriate eh? He definitely would have been on the side of the occupiers.
The next time I'm there I'm going to have to leave a thistle for him, and see if he's smiling... ;)