The Shit Kebab and the Democratic Deficit 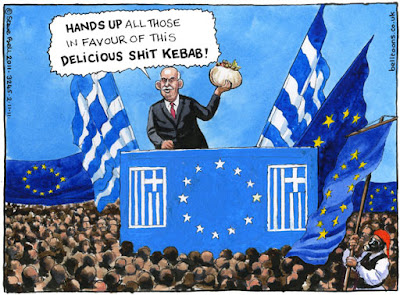 The leaders of Germany and France told Greece on Wednesday it would not receive another cent in European aid until it decides whether it wants to stay in the euro zone.

And that he has been spanked by the Iron Frau Angela Merkel.


The Greek leader, looking chastened after a torrid dinner with European Union decision-makers that Merkel called "tough and hard" on the eve of a summit of G20 major world economies, said the plebiscite would take place around December 4.

"It's not the moment to give you the exact wording, but the essence is that this is not a question only of a program, this is a question of whether we want to remain in the eurozone," Papandreou said.

Which must have been painful eh? For all of them... 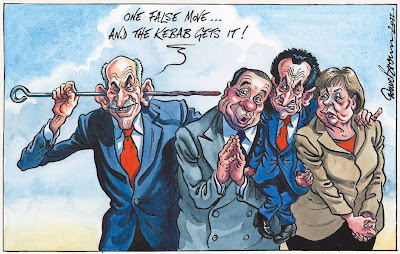 Oh boy. Poor Papandreou. I bet he wishes he was back in Toronto.

So Rob Ford could cheer him up. "Hey Pappy no problem. All ya gotta do is find da gravy. Here have a jug of root beer. And...uh...if nobody wants that shit kebab... I'll eat it."

But of course there's nothing funny about The Collapse of Capitalism:The Opera. Because as the beast grows more desperate, democracy is a luxury it can't afford.

The democratic deficit has now tipped over into a democratic crisis. To protect the banks that lent to Greece and protected its elite from unwelcome tax demands, the country is being systematically stripped of its sovereignty, as EU and IMF officials swarm over its ministries drafting budgets, setting policy deadlines, "advising" on tax and pushing through state selloffs.

No wonder nationalist anger is growing. And all this to deliver a death spiral of spending cuts and tax increases that are sending Greece ever deeper into slump and debt. It makes no sense. Unless it's understood that it's not the Greek economy that's being rescued, but European and US banks exposed to Greek debt.

The Greek people have every right to vote on an austerity plan that will reduce them to paupers. Democracy was born in Greece and it looks as if Merkozy and company are determined it will die there.

And if you think it can't die here, as economic conditions deteriorate. As they surely will.

Yup. We're living in perilous times. And they're about to get even darker.  It's time we decided our own fate, like the Greek people will.

Now more than ever. Occupy the world. 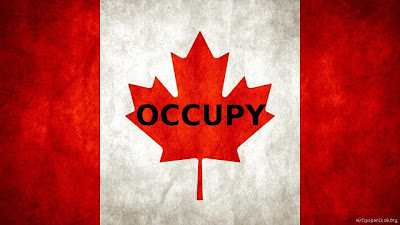 Looks like a bunch of posturing by France and Germany considering all that "aid" would just be re-routed back to French and German banks that lend out all that Greek money in the first place, won't help the Greek people in the least.

It's so ugly to watch the EU desperate to hold on. The referendum could go either way and Pappy knows that. Greeks with investments/holdings/any assets will think twice about turning their euros into drachmas, so much risk, a lot to lose. I wonder if the referendum will bring out more voters than actual elections do. If it's a get out of EU, then it's suddenly okay for Italy/Portugal/Spain to do it as well, eventually. That will leave the EU so small, it simply won't matter anymore, no clout.

Update - Pappy's confidence vote to be held and the New Democracy party (Salvation Gov't) to take over. They will accept the bail out and the referendum is dead. Wow, the immense pressure being put on Pappy and the Greek people is stunning. Markozy has said the stability of the Eurozone is more important than Greece!

hi Rev Effect...I definitely want the Eurozone to survive because it's quite good on human rights, and many in Greece got their country into this mess because they didn't pay enough taxes. But I feel sorry for them now, and I think that they should get a chance to vote on something that will affect them so drastically. I'm sure that they would have voted YES, because what can they really do? But democracy is vital and dignity is priceless...