The Occupy Movement and the Nature of the Beast 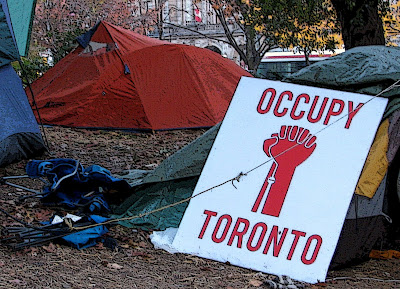 Twenty four hours after this little campsite was demolished, I see that Margaret Wente couldn't restrain herself from going down to St James Park, squatting on all fours, and delivering this dreary dump.

Despite the current circumstances, every single protester in North America is pretty well guaranteed a comfortable middle-class existence – so long as he or she can manage to finish school, show up for work and avoid excessive substance abuse – in a functioning democracy with the rule of law.

Right. Just remember which end of her it came from eh?

But of course she wasn't the only one. Who can forget the Progressive Bloggers who called the occupiers "degenerates" and "rabid animals?" Or all those other angry old people who screamed that the baby movement should be strangled in its cradle.

The laughing jackals. The miserable fools. Don't they understand that we were also fighting for them?

Wages are growing at the slowest rate in nearly two years, new figures from Statistics Canada show, as the most populous provinces grapple with a weak job market that is making it more difficult for workers to demand pay raises. Meanwhile, the spike in global commodity prices that started in the spring is translating into unusually high energy and food costs.

Don't they understand that the rich are getting richer, and the poor are getting hungrier?

Don't they understand the real nature of the beast?

Scientific research is revealing that 21st century financial institutions with a high rate of turnover and expanding global power have become highly attractive to psychopathic individuals to enrich themselves at the expense of others, and the companies they work for.

Doesn't this sound and look familiar?

This shark-like fixation on self-interest means that psychopaths often feel a clear detachment from other people, viewing them more as sheep to be preyed upon than fellow humans to relate to. For instance, psychopaths in prison often use group therapy sessions not as a healing process, but as an opportunity to learn how to simulate normal human emotions. 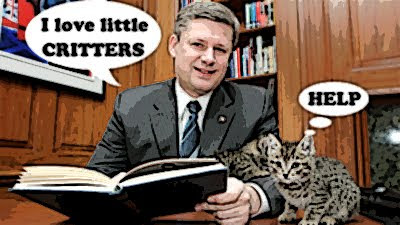 How blind can they be?

Oh boy. I must admit I'm wounded. And my sadness feels almost fatal. For November is a cruel month.

But even if it claims me, or I just give up, I know that the struggle will continue.

For the union movement was and is our only friend, and we couldn't have a better one.

March with them proudly my gentle occupiers.

For history is on your side.

There is power in a union.

And you WILL change the world...

The MSM has definitely been very irresponsible in their coverage of Occupy, but should anyone have expected anything more? I've see their lies first hand, and been somewhere where news trucks/reporters were present, only to watch that channel later in the evening and see a bunch of fabrications that in no way represented the day's events. Disappointing.

It'll be interesting to see what direction this movement takes next. The most likely scenario I would think is going to be strikes, boycotts, people moving their money out of major banks and into local credit unions as is happening in the US at record rates, etc.. all things that are going to make it very hard for the news to identify a few "undesirables" and use them to define the entire movement.

I think this is all far from over.

There are a lot of people with post-secondary degrees living lives of poverty.

But she's a documented plagiarist and a fraud, so what else can we expect from the turd?

A couple of days ago she wrote that rape is becoming a non-issue so feminists should shut-up about it.

hi Rev Effect...No it's definitely not over. I think the best and most creative part comes next. I must admit I was feeling pretty down when I wrote this post. But then Sebastien smacked me on the back of the head, and I read that occupiers all over the country have been planning how to resist the Harper regime, and some were making noise outside a place where he was speaking today, so now I'm feeling so much better... :)

hi Thwap...you're right, I really shouldn't pay any attention to what Wente says. As you point out, she doesn't know what she's talking about. Now that she can't plagiarize anymore stuff, and she has to write her own garbage, it really is PATHETIC...