The Burning Planet and the Icy Hand of the Cons 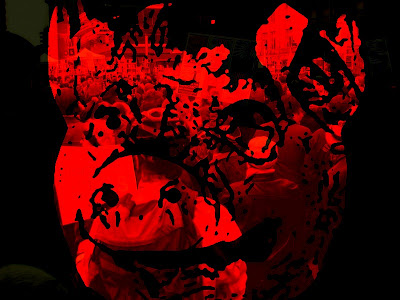 They are planning to torch the planet. By sticking another knife into the bleeding side of the Kyoto Accord.

For the greater glory of Big Oil.

They are planning to turn us into a prison state.

To appease the old white people in their rabid base, who believe in moral certainty, love punishment for its own sake. And would strangle the young in their cradle. Or have them arrested for daring to complain.

They are trampling on our democratic traditions, and turning our Parliament into a fascist circus.

In 1997, at the beginning of his political career, Harper penned a now-famous essay in which he complained that the Canada’s political system was badly broken. With the Conservative party fragmented and weak, a string of Liberal electoral victories had resulted in a “one-party-plus system” which was, he assured the reader, “little better than a benign dictatorship.” One can think what one likes about this characterization, but assuming that Harper really believes that the repeated winning of fair elections by a political party constitutes some kind of dictatorship, then how would he describe a government which silences debate, carefully manages press access, rejects minority rights, defunds its opposition, and suspends Parliament at its convenience? One shudders to think.

And still some would earnestly debate whether this is significant. Or not.

When all it means is that the Liberals won't go away, neither will the NDP, and as long as progressives are divided the Cons will rule FOREVER.

While we look on helplessly, as if frozen, and watch those alien ideologues slowly destroy Canada.

And I stare at this video of a frozen pillar of salty water descending towards the ocean floor, and can't help think of what is happening to us...

Did you see that poor starfish raise its arms to the sky as its life was frozen out of it? Was it a red one or an orange one? And does it really matter?

Not to me eh? To me the conclusion is obvious.

Either we see the forest for the trees, stop playing old politics, and unite to defeat the common enemy.

Or first he will freeze Canada.

And then he will burn the earth... 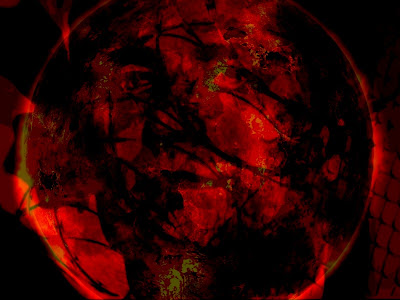 The people we don't usually like to think about are biding their time. Once they can buy guns with no registration, they can buy hundreds and nobody will know. They can distribute them to others with no accountability. "Occupy" was not armed. The next wave of protest against the Harperreich will be. To the teeth.

Hey Simon, I love your blog. I love your love of this country, and I share it. I share your deep pain at these injustices. I love your love of young people and your fierce protection of them, and I share that too. Simon, I am a middle aged white chick. While I accept that I am complicit in the mess we are in merely from having been born in the time I was, I AM doing all I can. I work hard at being a responsible citizen of this planet. I am involved in everything I can be involved in to help fix this mess.
You are a tolerant, loving man and by no means is your anger misplaced. But not all old white people are evil.

hi anonymous...I personally and passionately hope that any occupy movement in this country will remain unarmed. For guns can do nothing against the power of peaceful protest. All we have to remember is that we are more than them. And use that to our democratic advantage...

hi Karen...thank you for your kind words and please believe that I do not consider older people people to be the enemy. I work with them every day and I simply adore them. Even though they sometimes give me a hard time. ;)
I was only taking those words from what Frank Graves said the other day in this article:
http://www.theglobeandmail.com/news/politics/is-a-liberal-comeback-mission-impossible/article2250088/

Mr. Graves says that, because of demographic fault lines, Canada probably has the world's deepest generational gulf, making it increasingly a country of old, white people who vote Conservative and young multicultural people who don't vote at all but have values that differ markedly from those of older people (including, maybe especially, their immigrant parents). It's a gulf that risks delegitimizing the country's democracy and short-circuiting the generational transfer of political power.

The fact that this situation exists is really the fault of younger Canadians for not voting. So I'm really being harder on them than anybody else. But I guess I'm going to have to make that more obvious. My beautiful Canada includes young and old, and everybody in between...

I reverse my position and now think it totally appropriatew that Harper changed the "The Governement of Canada" to the "Harper governement" on its letterheads. We as canadians want no part of this shame.

hi Just Call Me Rick... you know I've never thought about it that way, but I see your point. Calling it a Canadian government would be extremely inaccurate, as well as highly embarrassing. Better the Cons should take all the blame. When it comes to putting them on trial that should prove extremely useful... ;)

hi Local949...yes Cameron's Cons and our grotesque government have a lot in common. Both are rabid ideologues, both are union bashers, with their heartless austerity programs they're both leading their countries to economic disaster. And of course they're both determined to torch the planet. The good news? Once their day is over, they won't be back for a generation...