Stephen Harper's Made in Canada Recession 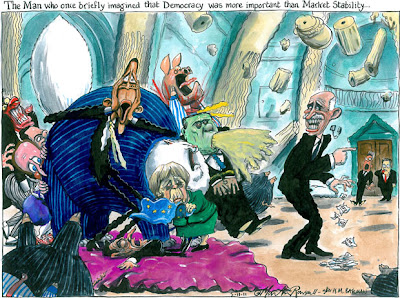 Holy Acropolis Now. As if what was happening at the G20 summit wasn't enough of a nightmare of naked panic, piggy squeals, and vomit.

As if these figures weren't frightening enough.

Canada’s jobs market suffered its biggest loss in 2 ½ years last month, driving the unemployment rate up two notches to 7.3 per cent as the economy shed a massive 54,000 jobs overall, most of them in manufacturing and construction.

There was Stephen Harper today blaming it all on Europe.


“As we all know, it’s a reflection of the lack of confidence that has been spreading in world markets as a consequence of the European debt crisis. And by the way, this is not by any means unique to Canada.

When in fact those figures have all the signs of a Made in Canada recession. The gutted manufacturing sector. The lousy jobs.

A report from CIBC earlier this week pointed out that while the economy continues to replace the jobs lost during the recent recession, most have been of a lower paying variety, as suggested by the tepid gain in average wages.

The Cons used the stimulus money to build gazebos and buy votes instead of creating lasting jobs. They allowed the high dollar and the other byproducts of the so-called Dutch disease to cripple our manufacturing industries.

They allowed good jobs to be exported, and turned us into a nation of hewers of potash, drawers of dirty oil, casino stock shufflers and hamburger flippers.

Now they're planning to slash government, kill good jobs, and are STILL refusing to tax the rich. Because you know they're suffering sooooo much.

The capital markets business at GMP recorded an operating loss of $3.8-million compared with operating earnings of $36.4-million in the third quarter last year. Revenue fell 59 per cent "due to a significant decline in investment banking revenue, losses recorded in client facilitation and principal activities and lower commissions."

But still giving themselves juicy bonuses.

Bonuses took a big hit at GMP in the quarter. Variable compensation fell to $16.3-million from $38.2-million the year before.

Even though the unemployment rate for young Canadians is now 14.1 percent, seniors struggle, the rich grow richer, and the poor grow poorer.

Who said Canada was different? Who called the kids at Canada's humble little Occupy camps spoiled and greedy?

Who said it couldn't happen here?

Who said the Cons were good money managers?

Oh boy? Don't throw away your used coffee cups eh? They might come in handy.

A penny or a smile? 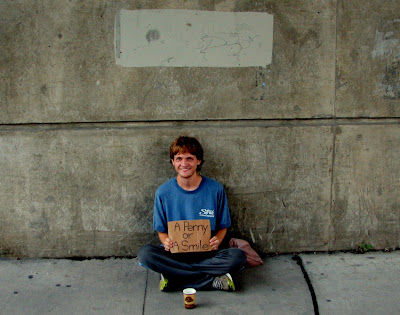 Or as my buddy Zane from Vancouver, who sent me this tape, would say.

On a Friday night.

We all need to open our eyes...

Hmmm...it's not my kind of music. And my Mum wouldn't be shocked. But who can argue with the message?

So good for Zane.

Have a great weekend everybody...
Posted by Simon at 12:45 AM

That is the only thing Harper does well. When his mismanagement shows up, he merely blames everyone else for his boners. He is sounding more& more like a little brat in the sand box everyday. Next he will be saying the Liberals made me do it. Man has that man got to go and the sooner the better while we still have some form of sanity left.

hi Marie...you're absolutely right. Despite the numerous bluders of his incompetent regime, Harpo has never once admitted to making a mistake. Whenever some scandal erupts he doesn't bother attending question period, and if that doesn't work he blames somebody else. As for our sanity... whenever I think that we're stuck with him for four more years, first I despair, and then I go crazy... ;)