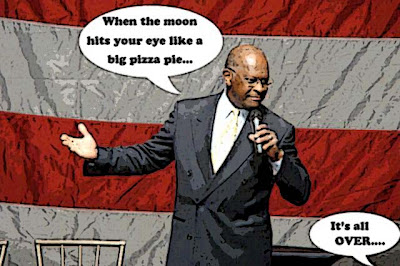 Holy pepperoni. I see Herman Cain, the former CEO of Godfather Pizza,  is having a really bad week in his campaign for the White House.

First he got a ringing endorsement from Conrad Black. All the way from the Big House.

As I suggested last week here, there is a chance of excitement. Herman Cain is a self-made African-American, well-educated, keyed to opportunity and not victimhood, a successful fast-food executive and management buy-out financier, and former chairman of the Federal Reserve Bank of Kansas City.

After such a sequence of GOP fade-outs, it would be premature to conclude that the man the office seeks has been found, but a counter-chippy African-American with his background could be a dynamite candidate and an effective president (and could split the African-American vote with the incumbent).

Then he was accused of sexual harassment.

Republican presidential candidate Herman Cain on Monday said he was "falsely accused" of sexual harassment during the 1990s but adamantly denied any inappropriate behaviour.

But his acknowledgment came at the end of a rare day of campaigning in Washington in which he offered several conflicting accounts of the allegations in a Politico report, even as he emphatically denied that he had ever sexually harassed anyone in his life.

Now he's singing for his supper...

And heading for the dog house.

Golly. What a pleasant surprise. I thought I was going to HATE the Republican Presidential race eh?

It's actually been pretty entertaining to watch all those fear mongering, bible thumping Republican candidates get their asses handed to them by frail old Ron Paul on a consistent basis.

hi Rev Effect...yes, as I said in my post,I am finding the Republican race rather entertaining, especially since so far none of them seem capable of beating Obama. But then his people seem to be going after Romney so I have to conclude that they think he could.
But yes, I'm feeling rather fond of old Ron Paul these days, which of course should be deeply disturbing... ;)