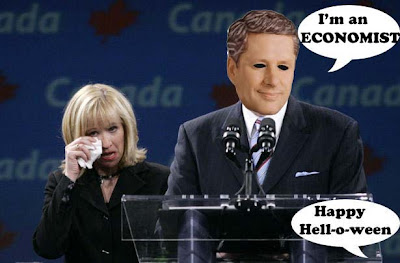 Although it's a gay national holiday, I decided not to celebrate Halloween this year.

Because let's face it eh? Who needs scary when we got Harper?

And besides with Lezra Levant running around like the crazy lady guy from Psycho... 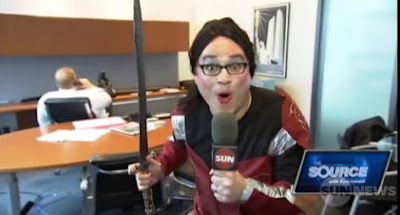 I decided it was too dangerous to go out. I mean with all those other drag queens running hobbling staggering around, how was I supposed to tell one from the other?

You know some people say Lezra is losing it, but I think he's just crying out for help. And who can blame him?

But of course this is the REALLY scary part.

The economy is threatening to go south again, but Harper is still insisting he's an economist, and little Jimbo Flaherty is still determined to slash spending and plunge Canada into a recession.

Because, as usual, he didn't see it coming, he doesn't know what he's doing.

“I think it’s great for Flaherty to go to Europe and tell everyone what to do — but I hope someone in our government is thinking about what we do when the s--t hits the fan here, which it will,” said the former head of a major Crown corporation.

And he can't decide whether to be an idiot gnome or an evil goblin... 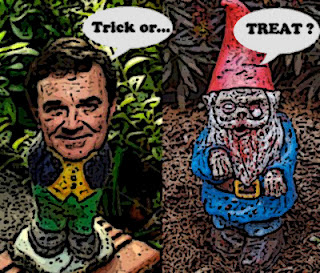 Can you imagine the social unrest?

The International Labour Organisation has warned that a jobs crisis caused by the slowdown in the global economy threatens a wave of widespread social unrest engulfing both rich and poor countries.

Official figures released today showed that unemployment in the 17-nation eurozone had climbed to a 15-year-high of 10.2%. Young people are being hardest hit by the lack of jobs, with youth unemployment at 29% in Italy, 43% in Greece and 48% in Spain.

And youth unemployment in Canada is already TWICE the national average. So the Occupy Canada movement will just get bigger and bigger eh?

But of course that's why the Cons are building all those fancy new prisons.

Welcome to my recurring nightmare...

Who murdered Mrs Medicare????? !!!!!!
It was Jimbo Mustard in the kitchen with the candlestick.It's almost too funny to be scary. What an idiot. Keep up the great writing Simon.

As for the rest of the idiot gang on The Hill, good to see you underscoring their consistent stupidity, Simon.

Has Ezra Levant ever gotten laid? Even with a pet or a farm animal?

I think not. Unless a fellow "conservative" geek got it on with him another human is out of the question. But one afternoon of bliss with a dog, or a sheep could change his whole hideous view of the world.

Of course, it would no doubt traumatize the animal, so I guess it's not a good idea and should never happen.

Sun TV is truly scary... but thankfully only resentful old men and genuine lame-o's (ie. the Levants of this world) who are mad at the universe because they're in their 40's and still virgins, watch the channel. It would be a lot more terrifying if SunTV was shaping the minds of today's youth.

BTW, did I not get the memo, but when did it become acceptable in Canada for individuals to spew what is essentially bigotry on the air and in the papers?? I remember when people used to get fired and maybe even ruin their careers for that, meanwhile michael coren types seem to do it regularly with impunity.

hi Mark... Jimbo Mustard in the kitchen with the candlestick? I LOVE it. Thanks for the best laugh of the day. I'm afraid my post started on a lighter note, but grew progressively darker.
But since I've been living in Harper's Canada it probably won't be the first or the last time... ;)

hi Beijing... every time Levant puts on another ridiculous costume, and I can add to my collection of screen caps of him,I thank Fox News North. For now I will never have to take him seriously. As for the gang of ideological fanatics on the Hill, I try hard to laugh at them too, even though they're leading us to disaster. My consolation is that after they've finished with us, most Canadians will probably conclude it's time to finish with them... :)

hi Thwap...when I stopped laughing, and had managed to erase the ghastly image of Levant trying to mount a cow...or vice versa...I had to admit you were right. If I ever see him wandering in a field I shall call the SPCA immediately...;)

hi Rev Effect...yes you're right, Sun TV may be scary, but it's so amateurish and boorish, only the terminally stupid could watch it on a regular basis. And from what I see of their ratings that's a very small group. The other good news is that although Peladeau created the network for the sole purpose of attacking the CBC, it's just not working and it's costing him a bundle. Some blog recently put up a story about how his wealth is sinking like a stone, so I'm hoping that in six months, Stun TV will be just running infomercials, Ezra will be demonstrating kitchen gadgets, and Quebecor will be practically bankrupt... :)