Is Israel Playing into the Hands of Hamas? 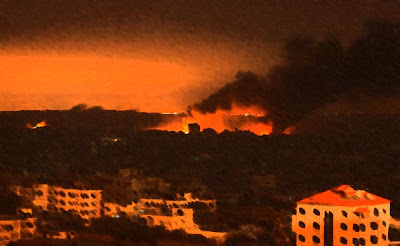 The bombs are falling on Gaza again. The killing continues. Hopes for a ceasefire have been shredded.

The Gaza conflict raged on yesterday after both sides dismissed a UN call for an immediate ceasefire, and Israel indicated it may move its forces deeper into densely populated urban areas.

Rejected not just by Israel, but also by these fanatics from Hamas' military wing 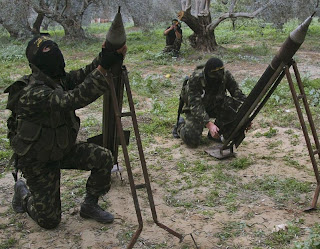 Who keep firing rockets at Israel and giving the Israelis a pretext to keep bombing and kill more innocent Palestinians.

But then why wouldn't they? When they stand to be the only winners.

If Hamas thought that lobbing missiles into Israeli civilian neighborhoods was a decent or proportionate response to the grim realities of the occupation, they were wrong. On the other hand, if Israel thinks it can bludgeon the Palestinians into political surrender, or get Hamas - or the Palestinian community at large, for that matter - to acquiesce to military occupation then it, too, is wrong.

To go after (Hamas) effectively, in, of all places, the Gaza Strip, one of the most densely populated places on earth, the IDF would have to level its towns and cities, block by block, and intensify the nightmare of the Gazan population, more than half of which is children under the age of 15.

But Israel cannot make Hamas surrender - it cannot "win." Meanwhile, the carnage will help Hamas, and other Palestinian military factions, make their case - not only in Gaza, but across the West Bank too. A glorious stand will even turn them into cultural heroes among Israel's Palestinian Arab citizens.

Because that's just what Israelis, Palestinians, and the rest of us need. Hardline violent Islamists controlling both Gaza and the West Bank. And inspiring a new generation of suicide bombers all over the world.

The Dance of Death goes on.

Weep for the poor little children born into the poverty and violence of Gaza. 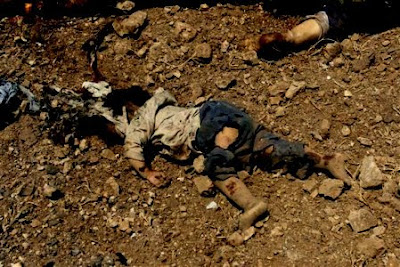 Who never got to live in peace in a Palestinian state. The poor little innocents who never knew anything but misery and war.

Israel is making the same boneheaded mistake as we've made in Afghanistan. They're bringing conventional military warfare into what is really a political war.
There is no conventional military victory open to Israel in this. That's a pipe dream, meaningless.
Yet they're handing Hamas an enormous political victory, the only sort of win Hamas has any interest in or hope of winning.
america's top general, David Petraeus, knows all about the distinction. He's led a team of military scholars that digested it all in the new American counterinsurgency field manual, FM3-24. You can Google that and probably still find it available, free of charge, in PDF format.
It's good enough for the purposes of these discussions. You really don't need to go back into the writings of Guevara or T.E. Lawrence or Giap although each of them is fascinating in his own right.

Judging from this, Simon, the answer to your question would have to be 'No'.

[I've provided the link to the article as posted on my website as the AIC link has been 'unstable' over the last couple of days, possibly due to the situation there.]