Gaza and the Prayer for the Children 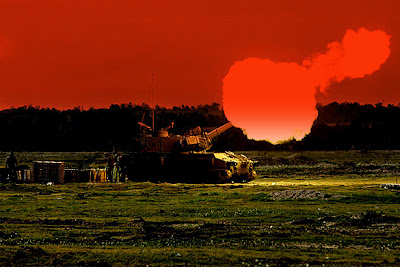 An Israeli officer admits that the IDF has been using enormous firepower in its assault on Gaza.

"For us, being cautious means being aggressive...... From the minute we entered, we've acted like we're at war. That creates enormous damage on the ground ... I just hope those who have fled the area of Gaza City in which we are operating will describe the shock. Maybe someone there will sober up before it continues." 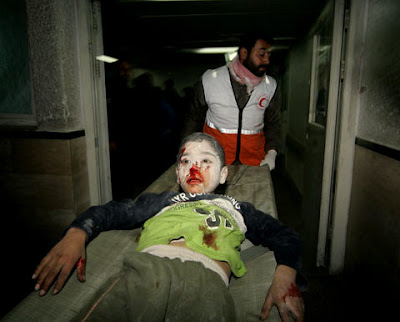 What is amazing is that so many Western leaders, so many presidents and prime ministers and, I fear, so many editors and journalists, bought the old lie; that Israelis take such great care to avoid civilian casualties. "Israel makes every possible effort to avoid civilian casualties," yet another Israeli ambassador said only hours before the Gaza massacre. And every president and prime minister who repeated this mendacity as an excuse to avoid a ceasefire has the blood of last night's butchery on their hands. 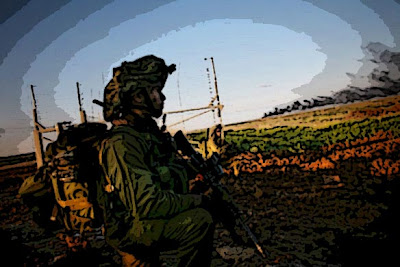 Under the circumstances, Israel had the right to act in self-defence but its response to the pinpricks of rocket attacks was totally disproportionate. The figures speak for themselves. In the three years after the withdrawal from Gaza, 11 Israelis were killed by rocket fire. On the other hand, in 2005-7 alone, the IDF killed 1,290 Palestinians in Gaza, including 222 children.

And now that almost 2000 are dead, I'm left to wonder what such brutal tactics, and killing so many innocent civilians and children, does to the soul of a nation. A nation I've had a special feeling for ever since I was a small boy.

Wonder whether Israelis need to take a long look in the mirror and recognize what 40 years of occupation and war have done to THEM.... and the Palestinians .

And then even though I'm not religious, join in this prayer for the children of Gaza. 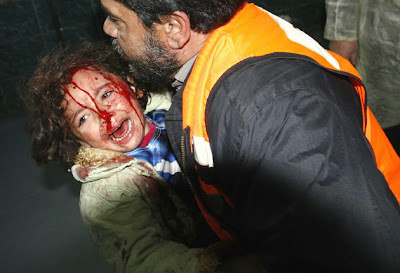 Lord who is the creator of all children, hear our prayer this accursed day. God whom we call Blessed, turn your face to these, the children of Gaza, that they may know your blessings, and your shelter, that they may know light and warmth, where there is now only blackness and smoke, and a cold which cuts and clenches the skin.

Stop the killing. Stop this bloody Dance of Death. Have the strength and the courage and the decency to do what is right and good for both of you.

And of course, the media are marginalizing them, as usual. SHAME!!!

I cannot image what hell is like but this is hell on earth for Palestinians, and their children. I am deeply shamed by this holocaust.

It's been a long time since I read something that made me cry. I'm not religious either, but I join you in prayer.

Judy Rebick and her group of courageous women were awe inspiring. The CBC ignored their inspirational story in their 6:00 pm news.

I am following events in horror. All those smashed and broken bodies, more than 25% of the casualties women and children. And those who have survived, the wounded, are facing an already deprived existence physically and spiritually maimed.

Montreal Simon: You are a treasure!

We see pictures like this and worse on our media. I wonder if the rest of the world sees them too?

This is beyond tragic. I am at a loss for how to describe how I feel:

One medical team found 12 bodies in a shelled house, and alongside them four very young children, too weak to stand, waiting by their dead mothers, the ICRC said.

Aid workers had been denied access to the site for days, it added.

Hi Bina....yeah I heard about that. Good for them. I've actually
been quite encouraged by the number of Israelis and Jews elsewhere who have spoken up against this brutal military campaign.
As for our pathetic right-wing media why am I not surprised?

Hi Jan...yes I feel very sorry for the poor Palestinians.The Israelis
treat them like animals. Their own leaders are either corrupt or crazy religious fanatics. They are so desperately poor.And with so many young people trapped in that giant prison unless the Israeli hawks can be restrained, the slaughter could could get even worse...

Hi Jennifer...it was beautiful wasn't it? It's so great to see a little humanity in such a dark place.I know there are a lot of other great Israelis, which is why I hate to see the country treat the Palestinians so harshly. Israel is powerful enough to fear no enemy, so they can afford to be more generous. The Palestinians aren't going anywhere, and neither are the Israelis. So the sooner they can live in peace with each other the better for both of them...

Hi Beijing...I'm afraid the CBC news these days is more interested in fires and traffic accidents, than they are in covering serious issues.
And as for the situation in Gaza... Guernica isn't really enough. Because the people in Gaza have been suffering for decades....
from violence, poverty, malnutrition, and hopelessness.
To attack them so savagely is unspeakably cruel....

Hi ml johnstone... thank you!! Even though I'm not. I just can't stand bullies, or seeing children suffer.
And besides... I can't afford to let my head get any bigger than it is...or my tuque wouldn't fit... :)

Hi Jewaira....although the Israelis are preventing the international media from entering Gaza, I think that thanks to the internet the story is getting out.
I've seen a lot of sad pictures like the one in that link. I find them hard to look at,but if they help force a ceasefire before more on both sides are killed, those poor little innocents won't have died for nothing...

Sorry, I didn't mean to be cryptic with my comment. It came from my utter despair. The feeling of being kicked in the soul.