The Cruel Death of a Gay Teenager 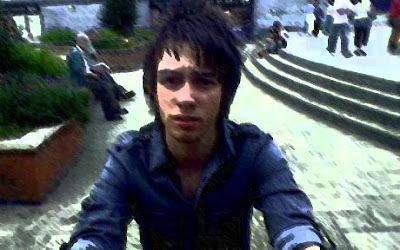 This is the kind of story that makes me doubt my faith in humanity.

A gay student jumped to his death after being jeered at by members of the public, an inquest has heard.

Shaun Dykes, 17, died instantly after throwing himself off the top of Westfield Shopping Centre car park in Derby on September 27th last year.

"He bent down to reach down to my hand when there was a shout of, "You're wasting taxpayers' money. He stood up, said, "It's gone too far" and started counting down. Then he said, "No", closed his eyes and threw himself off."

I don't understand why the human scum that taunted Shaun to his death weren't arrested. How they could shout "how high can you bounce? " And then take pictures of his dead body. I don't know what drove that tormented teenager to such an awful end.

What I do know is that about one out of three teenagers who commit suicide are gay. Which when you take into consideration the estimated number of gay people, means they are about 300 times more likely to kill themselves than straight youth.

And what makes it even more shocking is that the hatred that drives kids to commit suicide comes not just from the churchy bigots, or from the schoolyard bullies. But in almost one out of two cases from their own parents. Who don't accept their gay children or throw them out of their homes. Like Shaun who was living with his grandmother.

So what a coincidence that a new made for television movie is out about another gay teenager who jumped to his death. And a mother who rejected her gay son because of her religious convictions only to have an epiphany.

I won't be watching this movie. I just couldn't. It would make me too sad and too angry. I know the subject too well.

And besides I hate the title. Why would anyone pray for Bobby when it was dirty religion that killed him?

What I will do is keep on fighting the bigots and the bullies and the foul forces of religion that fertilize and water the bloody ground of homophobia.

Fight them as hard as I can and as long as it takes, and never ever ever give up.

What else can you do eh?

That's my prayer for Bobby.

Simon, I have to ask and understand if it's too private, but do your parents accept and love you for you?

I sure hope so.

As a mother, I can't imagine turning my back on either of my children simply because of who they love. It's something I can't even fathom.

On a brighter topic, I recently saw the Curious Case of benjamin Buttons. I highly recommend it. It is a beautiful movie and shows that no matter what life hands you, you should make the most of it and really live your life. I loved it.

( it was much better then Marley & Me..simply for the fact that Marley & Me made me bawl my friggen eyes out. I looked like I had just left the saddest funeral ever. LOL)

Hi unokhan...I think it will...the more straight people see that gay people are just like them...especially the idiots who want to get married ;)the less threatened they will be and sanity will prevail.
And yes anything that can be done to stop gay teenagers from dying in such number is worth it...

Hi Nicole...oh yes I'm one of the lucky ones. I was a troubled teenager so I think that was the least of their problems.I recently found out that at first they were pretty shaken up or worried. But my older brother and sister set them straight so to speak. And they've never shown anything but love and acceptance. I don't think I've ever heard my dad ever say the word "gay" but he asks about Seb all the time so WTF? :)
But I also know a lot of gay friends who have had an awful time with their families, and it's very sad. I saw a recent study that found that 40 percent of the homeless teenagers in NYC were gay or transexual, and I don't imagine it's any different in Canada. So it is a horrible problem, and like you I can't understand how any parent could reject their child for who they are.
As for the movie review yes I think I will go to see the Benjamin Button one. I like the sound of it. But of course I won't be going to see the Marley one because in the end the old dog is put to sleep, and I just couldn't watch that. I'd have nightmares for weeks, because when it comes to animals I'm a real softy. Maybe I can get a DVD copy and edit out that scene... :)

My best friend is gay, and he tried to commit suicide at 17 by drinking turpentine. Not sure if being gay figured into it, but I wouldn't be surprised if it did; he comes from a small town where acceptance of anything different is hard to find. Luckily, it didn't "work", and two years later, he and I met in our first year at university. We hit it off from the git-go, and I'll be visiting him and his two newly adopted sons sometime in early February. He and his partner are legally married. It took nearly 20 years for them to be able to make their partnership official, but I can attest that legalizing gay marriage has done them both a world of good. Before, it was just their families and a circle of friends that accepted them as they are; now, it's the law of the land. They can't lose their jobs, home, kids, etc., on account of being gay. Neither can anyone taunt or abuse them and NOT face the wrath of the law. Things like that should never be underestimated!