The Big Blue Blob on Polygamy and Gay Marriage 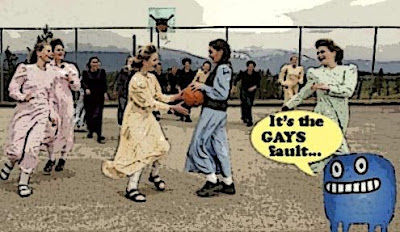 Jesus in a tortilla. It looks as if JJ has caught the Big Blue Blob with her hands in the fetus jar.Talking in tongues about polygamy and gay marriage.

Back during the marriage debate, we kept saying that this is exactly that would happen. Our arguments were ridiculed as "slippery slope alarmism". Now, when everything we were warning about is actually happening, are there many "tolerant" "open-minded" "progressives" out there ready to admit that they were wrong? Or are they already preparing to give in, picturing themselves in the front lines of a battle to "legalize" some other kind of "something-something-marriage"?

Now look I just want to say that although I find polygamy demeaning to women, whatever consenting adults do together is fine by me...as long as they keep kids out of it.

But Blobby and her creepy friend Lenny shouldn't get high on those formaldehyde fumes and blame gay marriage, when what usually leads to polygamy is RELIGION.

So if they want to fight polygamy shouldn't they be trying to eliminate religion instead of gay marriage? Just wondering.

Besides if the Big Blue Blob wants to insult us, by blaming gay marriage for EVERYTHING.

Couldn't she be a little more original eh?

Now go give your pickled fetus a hug.

And don't be so ignorant...