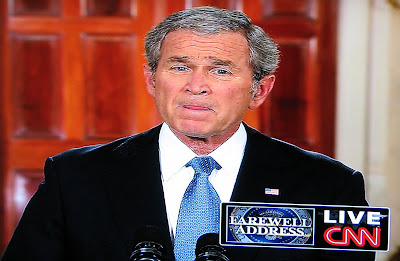 I watched George Bush's farewell address tonight on my new 46-inch HD TV and boy was that a SCARY experience.

The speech itself was frightening enough...so full of shite and self delusion.

I couldn't decide whether he was completely mad or just roaring drunk.

But the absolutely horrifying part was the way the Chimp loomed so large it was like he was in my bedroom, the fleshy parts under his neck wiggling like a buzzard in heat, and the booger in his left nostril looking as big as a boulder. Just click on the photo and you'll see what I mean.

And I wasn't the only one who noticed.

8:01 — Here he is, in the Hall of Flags or something! The 50 people who care about him are there clapping. There is some crazy woman next to Cheney, who is not smiling.

8:02 — We made the mistake of watching him on HD. Never do this. He looks… gritty. OMG he looks insaner as they zoom in.

8:03 — He congratulates the Negroids and their children for taking over America.

8:07 — His neck looks like a turkey gizzard on HD. This is completely terrifying.

Yikes. I almost wished I had live-blogged it myself. But I did drink HEAVILY.

Not just because I want to forget the last eight years. And what this ignorant, incompetent war criminal did to the world.

But because with the countdown clock ticking down.


Three days to go before the foul booger chimp is buried in the stinking garbage can of history. Along with the carcass of the Republican Party.

Montreal Simon: "you're a riot"!
Love your stuff.

'Anonymous' apparently isn't a regular reader of your blog. He might have cotched th'idear you were making an oblique comment about how teeth-grittingly the Bush White House has admitted the reality of Obama taking over, with Blair House being one of the more public snubs.

Maybe Bush is resenting the public statements Obama has made about immediately reversing many of Bush's executive decisions once he hits the Oval office chair. After all, Bush is telling us even on the way out the door, how right he was to make all those decisions. But then, what else can the man say? Admitting he was anything but right would likely be admissable.

Hi anonymous...well shoosh of course I am. I've never pretended otherwise. But then if you're suggesting I'm a racist then you must be an idiot. Tell you what... go look up satire in the dictionary. And when you think you know what it means and have apologized for your rude comment, I'll promote you to moron...;)

Hi Oemissions...why thank you. That's just what I need to hear after that nasty anonymous bruised my giant ego.
I appreciate it.
I have to admit that I haven'y the slightest idea what I'm doing.
But with that kind of encouragement I feel compelled to keep on doing it... :)

Hi Niles...no I guess he hasn't. Although to be fair I can see how some might take offence. I see it as satirizing what the good ol boy like Bush thinks about a black man moving into the White House.
The guy who, as you point out, buried him and his party and is preparing to reverse all his policies and close down Guantanamo.
I find the American media has been far too gentle with Bush considering what he did to their country.
Honestly could ANYONE have done more damage to just about EVERYTHING? I don't believe it...