Gaza: The Killers and the Healers

When I watched this raw video taken in a Gaza hospital, and I saw the panic and the confusion, I couldn't help but remember another bloody day. The day when I heard horrible screams coming from the room of a patient with advanced throat cancer.

He had a hole in the side of his neck the size of a grapefruit ....full of bloody muck and mucus. His family was gathered around his bed when suddenly his jugular vein or carotid artery ruptured and sprayed blood all over the room. All over the walls and the curtain. All over his family. And when I ran into the room all over me.

I was stunned. There were no dressings around to try to stop the bleeding. All I could do was crumple up a sheet and press it against the hole in his neck. It didn't do any good of course. Nothing could have saved him. But I'll never forget the panicked screams of his loved ones. And how horribly helpless I felt.

So I can only imagine the horror of the hospitals in Gaza where they don't have enough doctors, medicines, surgical gloves, running water, and other necessities to deal with the flood of wounded people.

Or even help the tiniest Palestinians unlucky enough to be born into this
horror. 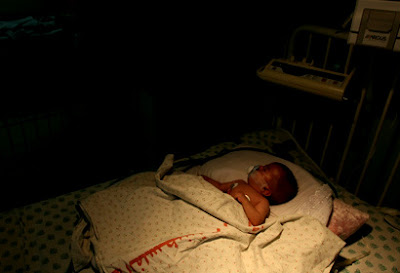 According to UNICEF, approximately 320,000 children in Gaza are under 5 years of age, including about 40,000 infants under 6 months of age.

Even before the latest outbreak of violence, 50,000 Gazan children were malnourished, more than two-thirds of all children suffered from vitamin A deficiency and almost half of children under age 2 were anaemic. Lack of access to food, clean water and medical supplies exacerbates threats to children's health and well-being.

Which is why I can't understand why Israel launched suck a brutal assault on such a desperate little enclave like Gaza with so many children, or why I keep hearing reports that some soldiers are targetting medical personnel.

You know all war is barbaric. But there is something particularly horrifying about this one that makes me sick to my stomach.

I have no desire to be caught between the religious thugs from Hamas and Israel's coldblooded generals...and the fanatical supporters from both sides. It would be so much easier to give in to despair and look away like so many others are doing. And I realize that nothing I say will make the slightest bit of difference.

But not to speak out about this horror would betray everything I believe in. So this is my message.

Stop the killers. Spare the healers. 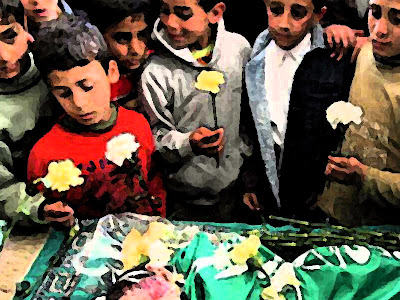 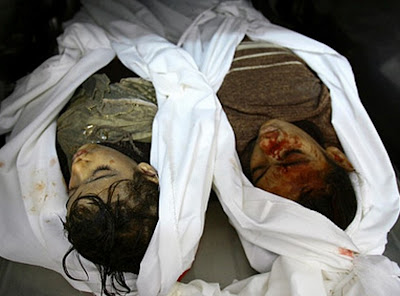