Harper and the Return of The Coalition 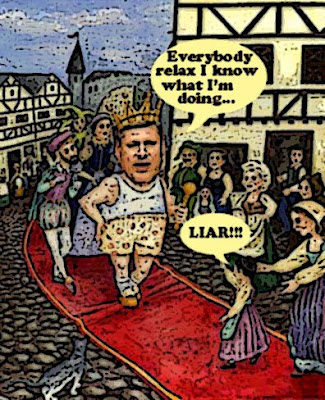 As I watched Obama's inauguration today I couldn't help but feel a bit envious. The Americans are so happy and full of hope. They have a new and cool President. While we are wallowing in the pit of despair because we got Stephen Harper.

The foul neocon bully nerd who doesn't know what he's doing, and has all the class of a guy who walks around in his underwear.

And then I saw this new poll and my spirits soared.

Polls conducted late last year showed a high level of opposition, especially outside Quebec, to a proposed Liberal-NDP coalition in the event the minority Harper government is defeated in the House. The new poll suggests Canadians' feelings have evolved, with 50 per cent of respondents favouring a coalition government, while 43 per cent are happier with the current Conservative government.

Imagine that eh? They buried it, nobody bothered to sell it. But the Coalition for Change came back anyway. Stronger than ever.

And what that means is that in less than two weeks Harper's Bush Cons could be toppled. And the coalition leaders can go to the Governor General and say that they are ready to form a new government.

And the only reason they have to offer to Canadians is that like them they just can't trust Great Naked Leader to do the right thing at a time of economic crisis.

Of the 1,000 respondents, 55 per cent disapproved of Mr. Harper's handling of his responsibilities, while 35 per cent offered their approval.

Which means that like the Americans we too have hope now. Hope that we can get rid of this foul sleazy regime that has raped our Canadian values, dragged our politics into the gutter, hurt women, children, poor people, torched the planet, and shamed our country in the eyes of the world.

And that we too can soon sing this freedom song, like the Great Pete Seeger and The Boss did the other day.

C'mon everyone we can do it. Let's stop worrying and wanking, show some passion for our country, and act ruthlessly to crush the Cons.

So we can sing it out loud. This land is my land, this land is OUR land.

The dirty Cons are rotting in the stinking garbage can of history.

Coalition for change - yes we can!

I dunno.
It will take a lot of work.
After this last election, I said: that's it. Its either a Coalition Party or we're doomed.
We have some good and great minds in Canada but they need to unite.
I think all this party business and emphasis on leaders is divisive.
I'm not afraid of the Bloc. I was impressed with the CAP but it would be a wasted vote to go there. I don't like strategic voting. ABC was a good idea.
When will this agreement on a different voting system happen?
David Orchard thinks the next election will require strategic voting and agreements.
Like I said, get over the party baloney. We have an environment to save, affordable houses to be built,and lots of innovative public transit. We still don't have a living wage.And we don't need no ore war.
The Obamaites are busy hosting community potlucks, discussing issues, building the grassroots network.
It seems as tho Ignatieff is attempting something like it, but I don't get any oomph from him,myself.
If I was in Quebec I would probably go with Quebec Solidaire
because they are responding to that inner sense of what it means to be truly involved in the body politic.Barefoot doctors, and consensus, and shared leadership.
After the Coalition MPs are elected, we elect a leader, is how I see it working.
I'm not much of a dreamer anymore. I think we can devise some methods that work, if we let egos and ideas of left and right and even centre go. Just problems and suggestions for solutions. Get creative.

Canada is canada again? Iggy said 'We have a lot to learn from the Americans" and "I keep in close contact with my American friends from Harvard". That doesn't sound very Canadian.
Of course canada is Canada means Liberals rule to you guys.

Their own original argument was against themselves.

Hi Jan...yes we can but will we? I'm still hopeful but I worry that hesitation will cost us and Canada EVERYTHING...

Hi Militant Liberal...Indeed Viva la Coalition. At a time like this one we need a sane government working together for the good of everyone. Not this rabid Con formation playing cheap political games...

Hi Oemissions...you make a lot of good points...although if you would vote for Quebec Solidaire you must be a dreamer.... :)
You see my natural instincts would be to vote for them too, but right now I just want an instrument...any instrument that will drive the Cons out of power and the Coalition suits the bill.As well as being the only way to get rid of the Cons as quickly as possible without an election that nobody wants and we can't afford.
I recognize it's a bit of a gamble, but I am almost certain that the GG would hand power over to the Coalition so I say go for it. Because really I can't imagine a worse leader than Stephen Harper governing this country at a time when we could be facing a crisis of almost unimaginable proportions. He's a neocon, he's on the losing side of history, and above all he can't be trusted...

Hi Tom....you know I wouldn't have any fears about a Progressive Conservative government although I obviously wouldn't vote for them. But I just think Stephen Harper is a radical ideologue who is out of step with this country. And I can't understand why more Conservatives don't understand or aren't concerned about the damage Harper is doing to their Party as well. One day they'll realize that Harper is doing to the Conservatives what Bush did to the Republicans. I just hope it isn't too late for all of us...

Hi Connecticut Man1...good point.:)
What makes it more complicated...and dangerous... however is that Harper is smearing the Coalition as some kind of separatist plot, and by so doing whipping up feeling against Quebec.
It's shameful and irresponsible but just one more reason why harper must go...