Afghanistan: The Beauty and the Horror 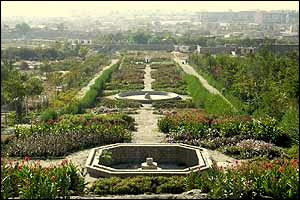 When I read that they had restored the Babur Garden in Kabul I was strangely moved.

Does beauty matter in a country torn by war? That question confronted conservationists when they started rebuilding the renowned Babur Garden in Afghanistan's scruffy capital city.

The result is a small miracle: a corner of loveliness in the heart of Kabul. Now open after more than $5-million (U.S.) of work, the garden – at 11 hectares, the size of 20 football fields – draws hundreds of visitors on Fridays, when Afghans begin the Islamic weekend. Families picnic under beech trees. Children chase each other on the lawns. Old men stroll up stone steps past cascades of water.

Although I couldn't help but think it's like something out of a Garcia Marquez novel.

An oasis of fountains and flowers surrounded by a creeping, menacing jungle.

Still it is a worthy project. The garden is beautiful. And so is the bullet riddled tomb of the amazing man who built it. 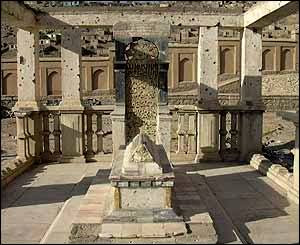 From time to time Baburi used to come to my presence but out of modesty and bashfulness, I could never look straight at him; how then could I make conversation and recital? In my joy and agitation I could not thank him (for coming); how was it possible for me to reproach him with going away?

To look straight at him or put words together was impossible.... In that frothing up of desire and passion, and under that stress of youthful folly, I used to wander, barehead, bare-foot, through street and lane, orchard and vineyard...

How romantic. Babur and Baburi. Wouldn't it be nice to think of all those homeless teenage boys in Afghanistan singing and dancing for him in that garden?

Instead of signing up to become remote-controlled suicide bombers.

“Even before you blow yourself up, virgins come to the site of the explosion and wait to take you to Paradise,” he says, parroting the propaganda he learnt from his Taleban indoctrinators.

Farman could not read the Koran and when I asked him he had no idea where Iraq was, or Palestine, though he did tell me that President Musharraf of Pakistan was “a Jew”.

This deadly, vengeful child is every Western intelligence chief’s ultimate nightmare. A programmed human bomb that cannot be reasoned with. And against whom there is little real defence.

And no quick, simple, or military solution either.

Afghanistan...the beauty and the horror.

Which reminds me....you know how Stephen Chickenhawk Harper says the Afghan National Army will be ready to take over in 2011....but General Blow Hard Hillier says it will take longer?

After watching this video of ANA recruits getting some jumping jacks training...

P.S. Why does Stephen Harper ALWAYS lie to us?
Posted by Simon at 1:30 AM

the video wouldn't work for me but if i guess correctly it's a sorry bit of calistenic choreography . and that's what i don't understand , and that's why i'm guessing karzai's been funnelling the money elsewhere.

the day the shit hits the fan , karzai will be gone in his private jet to a mansion somewheresville and will live like a king on the millions he's sloughed off.

plus the afghan army guys....they know what they're doing....screw it up, get paid not bad wages, keep that up , let other countries do the fighting.

that's all i can see through all this b.s.. it took the rcmp 2 months to train iraquis as police ....bit of a suicide mission, but police forces still involve units etc....so while it wasn't an entire army the timeline as a multiple means afghanistan should have had their army up and running by now.

Hi Scout!!! You know what I find hilarious is the U.S. marine instructor doing it by the book...while the new recruits are doing it THEIR WAY.Apparently they are very brave...but they only report for duty when they feel like it.
Still....anyone who can have a joint in the middle of a wild gun battle is my kind of soldier... :)
As for Karzai...who I must admit is a GREAT character...I see him running a five-star restaurant/private club in Paris surrounded by beautiful women. Singing songs from the King and I. And always deying it's a brothel...