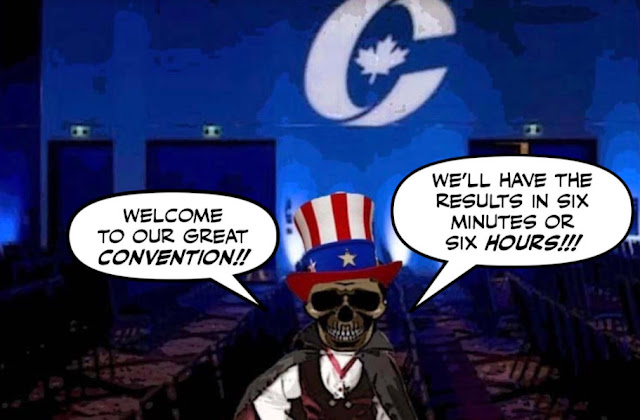 It was a horror show that began with a comedy show, when the clowns at the Con leadership convention couldn't even count the votes.

So those watching had to wait for six hours for the results, while our shabby media did their best to fill, and tried to pretend it wasn't an absolute farce.

Which sadly revealed both their bias and their mediocrity.

But about an hour before the results started to dribble out, the comedy show suddenly turned into a real horror show. 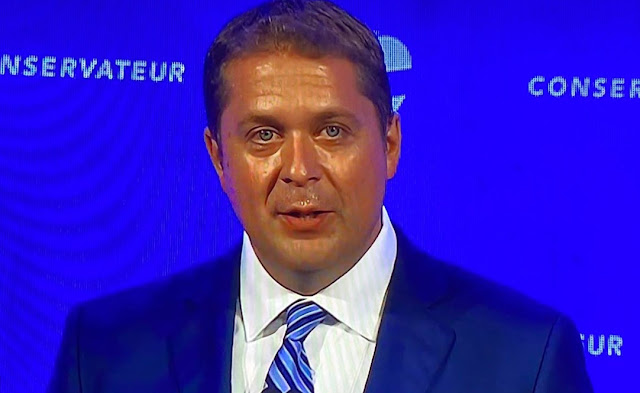 When Andrew Scheer in his last speech as Con leader finally revealed his scary far right agenda. Ranting and raving about the Cold War, making it abundantly clear he's the kind of man who would kill government even in the middle of a pandemic.

And even urging his followers to boycott the MSM and read right-wing rags like The Post Millennial instead.

As I told my followers on Twitter, we dodged a bullet that could have killed this country.

And now of course, we face another extreme right wing threat from the ghastly Con, who calls himself True Blue O'Toole. 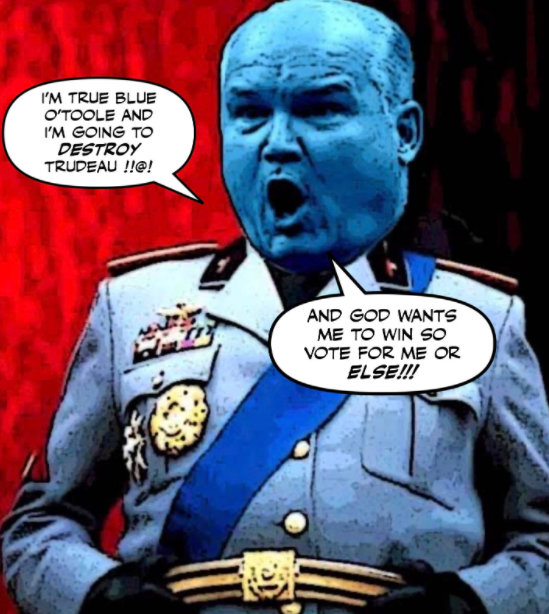 The bloated buffoon who like Scheer won the leadership by appealing to far right extremists and social conservatives.

But what makes that even more disgusting, is that O'Toole is almost certainly not a social conservative or a right wing extremist himself, but he was willing to say ANYTHING to be elected... 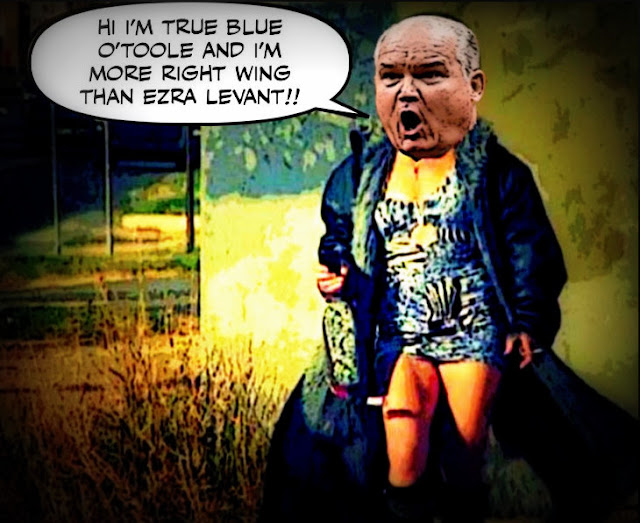 Or do or say anything to pleasure the Con's rabid base, and receive the blessings of people like Stephen Harper and Jason Kenney.... 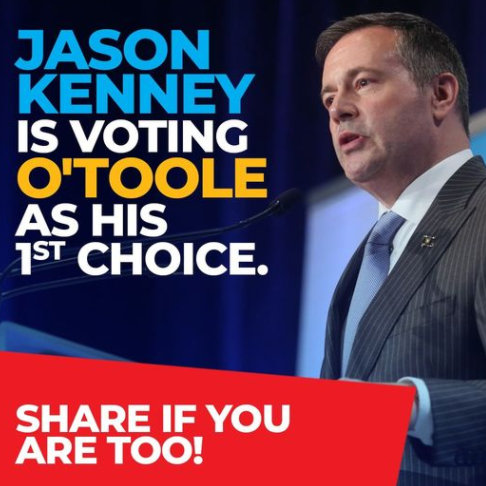 O'Toole tried to walk some of that back in his acceptance speech, by trying to sound a little more moderate. But it's too late for that.

No woman or LGBT Canadian can possibly feel safe, with that old political whore threatening their rights.

As well as threatening our country.

For O'Toole won the support of Trump supporters by speaking their language. 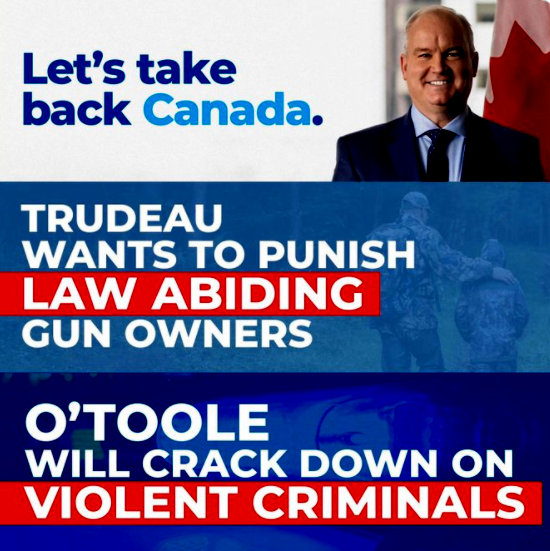 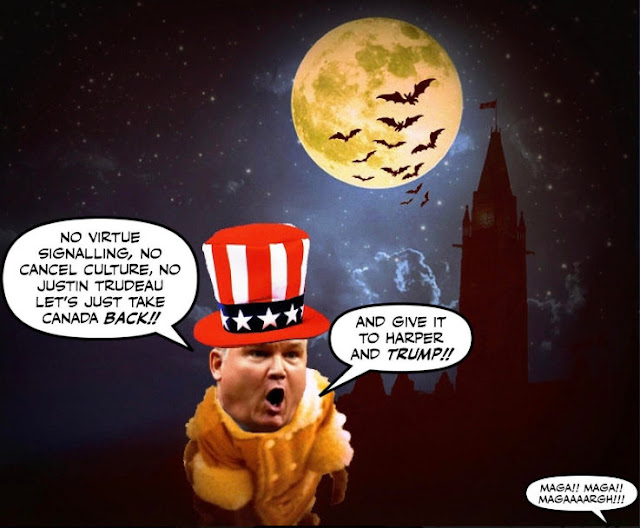 At a time when most decent Canadians are horrified by what is going on there, and the idea of being more American would strike most of them as insanity.

But of course, that's the good news.

The good news for Justin Trudeau.

As even the Trudeau hater Warren Kinsella is forced to concede.

It was a suicide note.

O'Toole sold his soul to the dark forces of the far right, for crass political purposes, and now he's trying to soften his image.

But going from Mr True Blue to Mr Nice Guy, or trying to be both at the same time, won't be easy. We'll make sure of that.

And ironically, by attracting all those far right extremists and religious fanatics he has done us all a favour, by exposing what the Cons have become.

And with an election looming, I'm pretty sure that Trudeau and his Liberals are only too grateful... 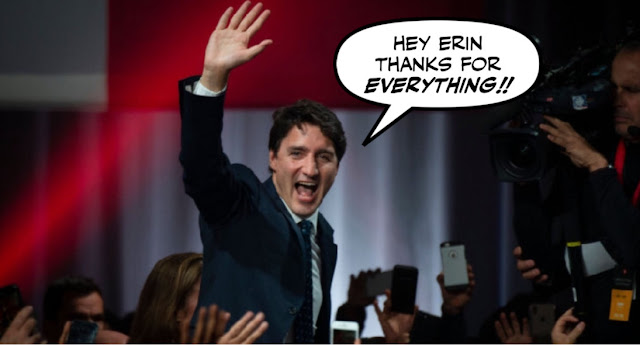 The Cons set out to destroy Trudeau, but he's still leading us to victory.
While O'Toole and his gang are still heading for the garbage can of history...
Posted by Simon at 11:34 AM

Today the old tool ranted about being proud of Canada's products nudge wink Jason - its bitumen baby. Falsely claiming he was for unity, he mentioned the west, Ontario and Quebec. I guess he is already punishing Atlantic Canada for potato pete.

So another lying vindictive reformatory reformatory. Deja vu all over again.

I come from a big and, befitting the stereotype, proudly alcoholic Irish-American family that's as loud and bigoted as the blarney bullshit artist. The loud and bigoted part got even louder and bigoted-er when my parents married, because my mother is not only not of Irish extraction, but is what might be considered "dusky" in hair and complexion. Think Meghan and Harry at a Christmas dinner table with a half-dozen or so copies of Bill O'Reilly and Sean Hannity.

Long story short, Erin Go Blah as I call him, reminds me all too much of people I'm glad to have not seen in years, and I can't wait for an election to come along sooner rather than later so that I can see him out the door. I like Leo Varadkar, the Taoiseach. Error O'Foole, however, puts my Irish half to shame.

Now Jann Arden, who I adore, got in hot water on Twitter for calling him what so many others do: a tool. Considering the outrageous and even violent vitriol spewed at Trudeau and Liberal MPs every single day it's really pathetic that anyone should be clutching their pearls about this. But perhaps it would have been more "nuanced" if she had simply dedicated her biggest hit to him, describing what he and all other Cons are: Insensitive.

First of all, keep in mind that certain liberal ridings of 2015 were lost to the conservatives in the last election. Andrew Scheer or Erin O'Toole or anyone else at the helm will not stop swing voters in remaining blue and not go back to any other progressive parties in an upcoming election. And second, if you ever heard of J.J. Mcoullough, he who claims Canada's national language should only be english, endorsed O'Toole. Does that mean what I'm thinking at the moment?

I see the tool as much more a oppenet than air show or weak Andy. This guy has skills

Based on Con leadership voting numbers the hard core religious right and associates bought O'Tool with their 30% of the total votes. Nothing has changed, the Reformers bought the CPC brand name from sell out MacKay some 20 years ago and they still own it. Somehow the 30% of a political party that is only currently supported by less than 35% of all Canadians has to lever the historical CPC brand name into a majority winning strategy which in reality only has core values common with 10 to 15% of the total population. Its a tall order but the key is people have to continue to associate with their historical impression of the brand name and not actually what the party has become. As with manufacturing companies that buy quality brand names and replace the product with low cost junk sold at a premium, the public has to buy and use it for a while before they know the truth. Strong advertising and muzzling the disgruntled can keep the scam going for years. The consumer had a peek at the actual party during the Harper years but he was relatively slow in his attempts to subvert our democracy. The 30% won't make the same mistake twice and are completely willing to jettison the parts of the country they consider a lost cause. Once invited in the only game plan will be to create an environment that is conducive to their longevity. Its a tall order with a slim chance of success but stranger things have happened in the political world and regardless of the outcome it won't be painless.

Yesterday O'Toole claimed he was open minded and he welcomes and listens to opinions that don't agree with him or the CPC. Today O'Toole told Canadians not to believe or listen to anything liberals say about him. So right out of the gate he shows the double standards the CPC are so famous for.

Hi Rumleyfips....Yes, O'Toole is trying to project a kinder, gentler image, but he went fishing for votes in very dark and racist places, and he is as you say just another reformatory who would kill the Canada we love ...

Hi Jackie....Top of the morning to you. That's quite an Irish story. I've always liked the Irish, Glasgow was practically an Irish town, and I always sympathized with the Catholics even though I'm a Protestant. But when I think of O'Toole I think Blarney as in bullshit. He's always pretending to be what he isn't, and that will trip him up sooner or later...

Hi Myworld1916....I'm hoping that many of those swing voters who voted for the Cons will swing back in the next election. And as for the Con lout JJ McCullough I have sent several letters to the editors of the Washington Post demanding that they fire him, but so far no luck...

Hi Steve...O'Toole may have more political skills than Scheer, but he has a bigger SoCon problem than the Ugly American had so he will not fly high for very long....

Hi RT...I agree with you that they are the same old Cons, but with every passing year the religious right becomes more of a force, no doubt influenced by what has been happening in the United States. In the U.S. the religious right is propping up Donald Trump, and they have the money and the organization to do a lot of harm in this country. As you know I have been warning about the growing influence of the religious right, but felt I wasn't ever taken seriously. Now hopefully more Canadians will realize it's no joke...

Hi anon@10:34 PM...I saved that clip and will use it my next post, for blaming everything on Liberal spin, shows what a duplicitous Con he is, and why we must not underestimate him...

Hi Simon, I can't believe the supposedly left leaning Wash. Post would have this Trudeau hating right wing hack, JJ McCullough covering politics in Canada. I urge everyone to write the editors at the Post to demand they fire him and replace him with someone with integrity, who will give accurate, actual assessments of what's happening up here. Heather Mallick gets my vote and I will tell them so.
JD

Hi JD....I also can’t believe that the Washington Post would debase itself by publishing JJ McCullough’s alt right Canada hating Trudeau hating garbage. I have written to the Post editors to complain not once but twice, and so have many other Canadians. But somehow he survives, and I can only surmise that he has scummy friends in high places..