Pierre Poilievre and the Skeleton in the Closet 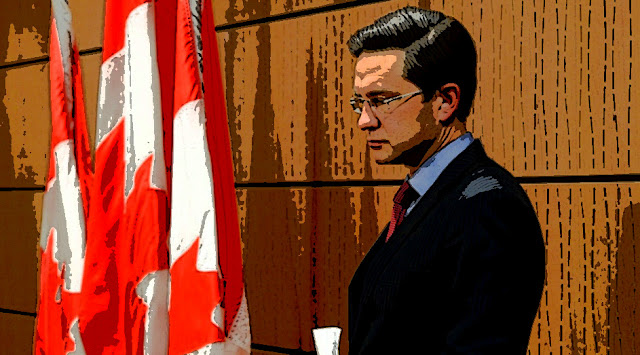 It's an intriguing Canadian political mystery. Why did Pierre Poilievre suddenly drop out of the Conservative leadership race?

He was a front runner, and the darling of the Con base. He had been campaigning hard for the job, he had the organization and the money.

But just a few days before he was about to announce his candidacy he suddenly quit, citing family reasons.

I never believed that, and now I have become aware of another possible reason, and it's truly shocking. 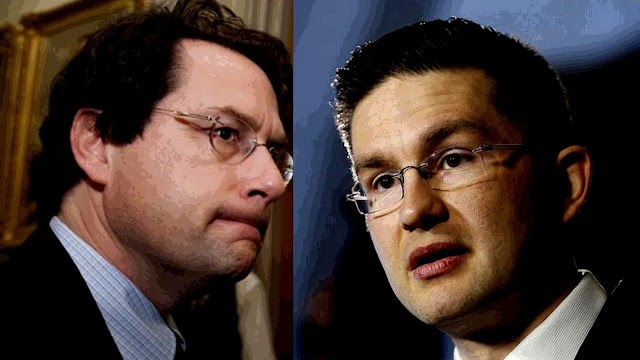 For in an interview on a popular Quebec morning show a few days later, Bernard Drainville, the former RadCan reporter and PQ cabinet minister, claimed that he believed Poilievre had a "skeleton in his closet."

The vicious bullying of top level civil servants to the point that they were often reduced to tears.

"He told me that Poilievre was ferocious when he met with them. He said he had heard of many meetings that ended with the civil servants in tears, after being humiliated so much by Poilievre...crushed...insulted...humiliated."

He told me that he believed the skeleton was psychological harassment... He said some of those victims were threatening to come forward...

And that Drainville alleges, was the real reason Poilievre dropped out so suddenly.

You can hear those allegations on this tape starting at around the 6:30 mark.

Now I don't know whether that story is true, but Drainville was a highly regarded political reporter, and with all his years on the political scene was and is still very well connected.

And it's very easy for me to imagine Poilievre as an ugly bully judging by the way he has behaved in the past, while serving his foul master Stephen Harper. 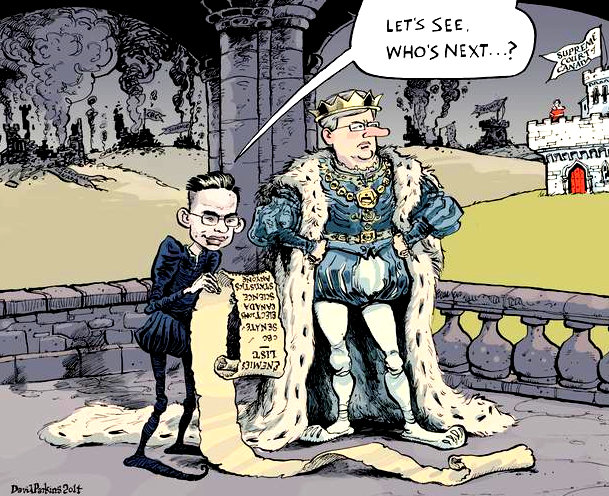 And by the way he is still behaving.

Having a “Press conference” on the “WE” scandal, @PierrePoilievre was visibly “upset” and using lots of “air quotes” and making papers in “black ink” fly in the air! @CTVNews #shitshow #cdnpoli #WEscandal pic.twitter.com/7RamUSvUnb

For that performance was absolutely disgusting, worthy of a political demagogue playing prosecutor in a fascist court.

And the day we normalize that kind of behaviour will be the end of Canada as we know it.

Now I admit I am biased. I hate bullies with every bone in my body, and Poilievre has always looked and sounded like a bully to me... 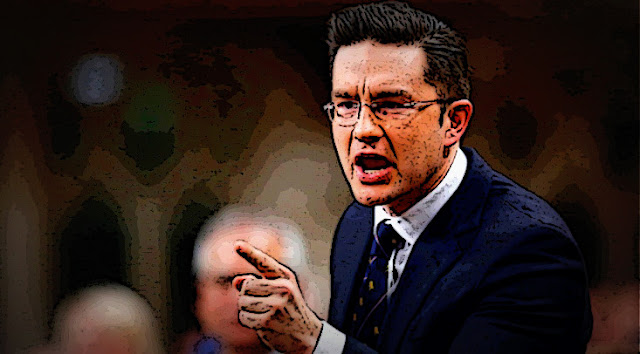 But it's not me who is making those allegations. If Justin Trudeau had been accused of being a vicious bully our shabby Con media would have been all over him for months like a sweaty blanket.

So I expect demand that the media treat Poilievre exactly the same way, or they will be sorry.

They must ask him whether it's true that he humiliated those civil servants in such a disgusting manner that he made some of them cry? Yes or No?

And if the answer is yes, or is determined to be yes, I expect them to demand that Poilievre resign.

That ghastly Con has acted like a political thug and got away with it for far too long.

Sadly, you know as well as I do that they won't ask him about it. Too busy sniffing around for more gossip about Rob and Katie now that WeGhazi has died the death it deserves, while throwing sexist barbs at Chrystia that she's "underqualified". Running interference for their Con puppeteers is what they do best. Makes you wonder what dirt the Cons themselves have on the filthy muckrakers. A pox on all their houses. The lying press, fake news, enemies of the people. Fuck them all.

Such an interesting post/development for me, Simon. In a number of ways.

First, that the smug, self-righteous, government hating bully we see on TV every bloody day would bully career government workers is about as suprising as the Leaf's early exit or the gambling going on in the backroom of Rick's Cafe.

Second, one major difference I see between Canadian and U.S. media is that, up here, the media is damn near 100% focused on investigating the government. I can see leaning heavily that way, as that is where the bulk of the power is. But, in the US the media at least seem to recognize the obvious fact that opposition leaders deserve investigation as well. They have tremendous power in a democratic system. I mean, your post outlines it perfectly... civil servants only willing to out Wee Wee Pee Pee if he runs for leader! WTF? He is, and has been the Con leader since the WE issue flared up during a time in which Schmear was nothing more than a lame duck. He has been the defacto leader during the most important crisis threatening this government.
Why, pray tell, do civil servants keep quiet while PeePee leads such a fundamental shift in Canada's prospects? And why does the media not recognize the power and influence PeePee currently has at a critical time? Why should this not be doggedly pursued now?

All leaders, government AND opposition must be scrutinized and exposed, otherwise, a big fat hand is on the scale and we're being mis-informed.

Skippy has forgotten Harpo's record and his gutless, smarmy part in it!

This makes Chagger look even better. She smiled so sweetly while ridiculing peckerhead pete's performance. Trudeau telling him that Sophie had the Conflict Czar's approval was great theatre . The Grand Inquisitor caught unprepared.

JB mentioned the flying papers and spittle. JoeMcCarthy had, in his hands , a list too. He, of course was lying as was pierette. Today, a Kelberger revealed the truth about peckerwoods two redacted pages. Nothing to do with rthe student grant programme at all.

Sad to see the party of Stanfield and Clark degenerate to the point that Pete, Pete and the old tool are the best they can offer.

The Canadian "media" was all over Trudeau for attempted "overreach" by trying to give his cabinet special executive powers. However, Doug Ford did that in Ontario (Bill 195) and even kicked one of his members out of caucus for not supporting it and ... crickets.

As for Freeland being under-qualified, I expect she'll do a great job and may end up as one of Canada's best ever FinMins. Morneau was not a particularly good FinMin. And, he gave in too often to Bay Street lobbying.

Let's not forget Pierre "Poutine".... I've always wondered about that and what Poilievre had to do with it.

UU -- and I think that's why some bitter gutter snipers from Morneau's office are trying to undermine the government. The old boy network at Finance not only doesn't want Trudeau to spend on recovery, they don't want a woman to take credit for it.

I suspect these boys in short pants and men in pinstripe suits want Telford fired, because Telford reportedly was upset with Morneau over elevating his pick to Bank of Canada rather than Carolyn Wilkins, who would have been another precedent-setter and glass-ceiling smasher. The rumor is that Freeland was Telford's pick as Morneau's replacement, and Trudeau enthusiastically agreed, because he is closer with Freeland and she fits into his "vision." So that's really a good look for all these money men in the back rooms, to be ganging up on the women in the feminist-ally PM's government. Go look at any of the tripe coming out of the Globe. The "she-covery" scares them.

But all these petty staffers are doing is giving ammo to the absolute worst people by doing so: as evidence, get a load of Skippy's latest tweet about the Rob/Katie gossip.

All that's missing from this tweet are the implied (((parentheses))). Skippy isn't only a bully, he's an antisemitic dick. What's the equivalent of the Anti-Defamation League in Canada? Send a message to them. This is really, really low even for Skippy. He's become Stephen Miller with greasy hair.

I wish those public servants would have come forward for one only has to observe PP's behavior to see it would be quite plausible that he would be a bullying a-hole to those under his supervision. Lest we forget his mentor and former dear leader who was quite the bully in his own right. Add to that their inherent disdain for the public service and it is not if he was a bully? It's more like, to how many? As bullies are also cowards, it explains quite well why PP pissed himself and pulled out of the race.
That video of PP throwing a fit reminded me of a neighbors dog when I was growing up. It was a Chihuahua who barked incessantly at anything. Not just regular barking. This was full blown, grand mal seizure barking. I swore its little head would explode as the spittle and drool flew out in all directions and if your fingers or toes got anywhere near it, it would bite. Well, one day its little head did explode and the little monster keeled over and died. Let this be a lesson for Mr. PP. If you bark incessantly at nothing or just for the sake of hearing yourself bark, be aware that one day your little head may explode as well. And just like that nasty little dog, you will be missed by no one.
JD

Skippy, a low level sociopath encased in a suit of verbally abusive Teflon. Strange why the Cons would not consider him a leadership contender. Perhaps its because he obviously worships himself more than their version of God.
Following Scheer disaster those in charge have obviously decided they need a marketable chameleon able to pull more chumps into the big tent. Harper demonstrated their fundamentalist base will sell out for table scraps served with a few encouraging words so they are free to appeal to a broader base of fearful disgruntled voters with an axe to grind. They just need a malleable figurehead they can market. Air show would seem to be the best qualified.

He should dress in leaher like Del Mastro, the oil does not show, it only makes it shiny

A brief trip down memory lane. Same old Cons, same faces, same old lies based on fear, greed and old stock entitlement and unimaginable Liberal elitism and corruption. Once elected job one is to achieve permanent resident status by subverting the independence of our democratic institutions.

Just a bunch of Liberals scared about Pierres bringing to light all the liberal crimes.