The Con Balloon Man and the Social Conservatives 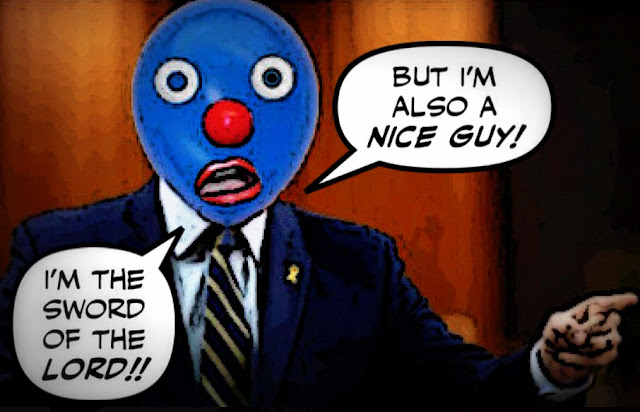 In my last post I looked at how Erin O'Toole is trying to change his image.

Trying to pretend that although he was elected leader by far right extremists and religious fanatics, he's not like them.

Or rather he is like them, but he's also more moderate than Andrew Scheer. And a really nice guy.

Which is why I've started calling him Balloon Man, because he's so full of hot air.

Considering the painful position he's in... 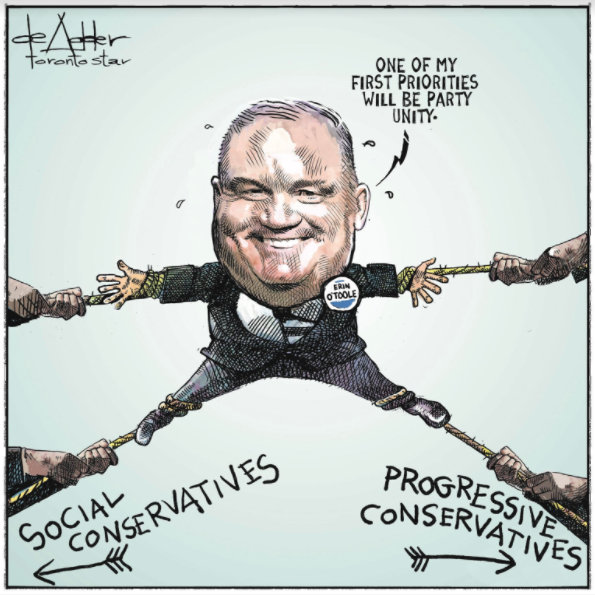 The Progressive Conservatives won't give him too much trouble, because there aren't very many of them.

And most of them went down with Peter MacKay... 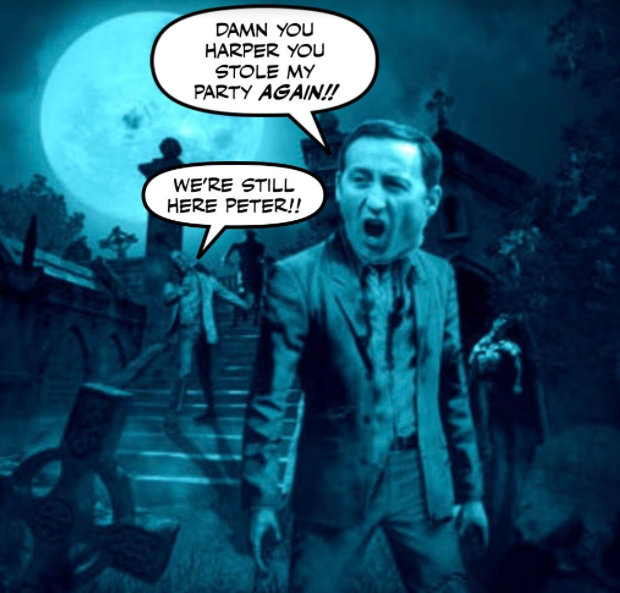 But there are now a lot more right-wingers and social conservatives in the Harper Party.
O'Toole owes them big time.

Campaign Life Coalition, Canada’s biggest anti-abortion group, claimed it swayed the outcome of the vote by recruiting over 26,000 new Conservative members and said social conservatives accounted for 35% of all votes cast.

And they'll be expecting Balloon Man to deliver.

“We expect that Erin O’Toole will ensure that social conservatives are respected and their values represented within the party going forward,” CLC said in a statement. “Everybody knows you can’t win a general election without your base.”

And so will Andrew Scheer, who sent out this photo today of him meeting with O'Toole...

And still looking very much in charge.

But then, as the spiritual leader of the many SoCons already in the caucus, and with all that new support, Scheer will be in a powerful position to tell O'Toole what to do.

So whatever the Con media says, as always with the Cons, the more things change, the more they won't.

Except for the the polls... 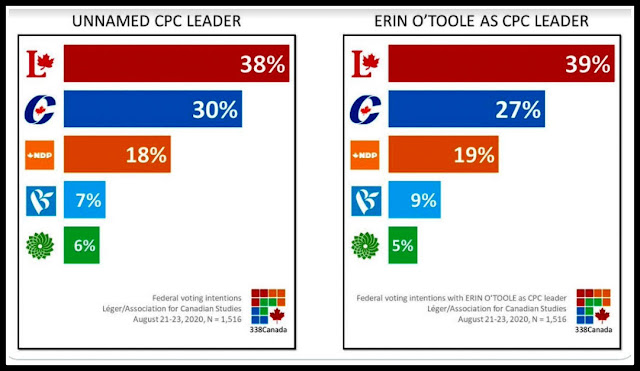 Which couldn't be more embarrassing.

Isn't the election of a new leader supposed to help a party rather than hurt it?

Balloon Man is trying to please everybody.

But already the air is  hissing out of him...

The so-cons and red-baiter Scheer, who apparently seriously believes that Trudeau is Castro's son and is turning Canada into a Soviet dictatorship, are bad enough. (Isn't that what the sausage maker said in his manifesto?) But pay special attention to why and how the Tool managed to swing those handful of Con memberships in Quebec. The gun lobby might be equally as powerful if not more so, considering the fact that they overlap. Gun nuts for Jesus. Because the poor fellow never said anything about beating swords into ploughshares right?

Shame on the media for running interference for these certifiable psychopaths and attempting to paint a pretty face on them, while smearing Trudeau as a crook. Skippy must have seen those polls, which must be why he's back to his old tricks trying to puff more hot air into the WE balloon. Complaining again about those redacted documents he threw on the floor in his petulant pigeon tantrum, and smearing public servants again.

Then earlier today, some other Cons thought they would be funny in response to the calls for the vulgar bigot Sloan to be removed, demanding that Trudeau eject the MP for Papineau (himself) because he faced "allegations of groping". Garnett not a Genius was one of them, who also sent out some dumb juvenile meme insinuating that Trudeau and Morneau were in a romantic relationship and Trudeau broke up with him. Perverse. This is how they do "outreach" to the LGBT community. But sure, they've "moderated their tone". What bullshit.

I really, really hope there is an election sooner rather than later (Quito Maggi seems to think there will be, and I can't wait to read the piece he's working on where he outlines his analysis), and that it puts these Con artists, religious freaks and Trudeau-derangement haters in the dustbin of history where they belong. God but I can't wait for September.

What a sight. A tool and a bigger tool. Neither of which are of any use. Erin, who will soon be known as Errand, as in boy, to the socons, taking pointers from Homeless Andy. I expect as you do, Simon, that nothing will change with these losers. Relying entirely on fake scandals, innuendo and baseless attacks on JT to fool us into voting for them. And as Jackie so ably pointed out, the gutter sniping, petulant attacks are already off and running. I can't wait to hear Errand's "platform" on how he plans on taking Canada back, to the dark ages of Harper. It will undoubtedly be like the greasy, sugary slop they're shoveling into their mouths. Hollow and lacking any substance whatsoever.
On a brighter note, it was nice to see this today which proves once again that JT is not only handling the pandemic well, he's also unifying the country. https://www.ctvnews.ca/canada/unlike-americans-most-canadians-pleased-with-gov-t-handling-of-pandemic-poll-1.5081789
JD

The biblical missionaries represent approximately 35% of a political party that represents approximately 35% of all Canadians. There is no honest path to governmental control. Unfortunately the dishonest paths are numerous but cannot be done without a tool or vector to exploit the fault lines. A stone mason needs a hammer to cleave a granite rock, a virus needs a means of conveyance. The missionaries need a convoluted media to open the fault lines and spread the retro disease. Truth is the ultimate vaccine but limiting the bot amplification of false narratives supported by foreign ownership would be a good place to start. One voice one narrative, not one voice bot/paid amplified into a deluge. The Tool is actually the type of tool the biblical missionaries need, the media part is already in place and it seems no one has the guts to address the type of paid for swill the likes of Facebook and Postits are willing to push.

So Skippy and Barrett are back to blackmailing Margaret again. Shinzo Abe resigned this morning due to a chronic health issue. I hope the Cons don't end up pushing Trudeau out the door due to a nervous breakdown. He loves his mom and they're using her to get to him, and the media laps it up. I've never seen anything so abusive. I'm not surprised that new book about Meghan and Harry pointed out that Meghan reached out to Sophie for advice on how to handle the media. Canada's garbage fourth estate is no better than the British tabloids. This is full-on "royal stalking" by these gawkish freaks. Now Sloan and his mob are attacking a Liberal MP, Pam Damoff (a woman, of course) and the Con mouthbreathers in general are going after Trudeau's kids as the Ontario schools start up. Something happens to anyone in Trudeau's family, I say again that just like with Diana the blood will be on the media's hands. This is sick.

I kinds think pete and the peckerheads will run up against privacy rights. The speaker's agency might find themselves in legal trouble if they release details of someone's private finances. Mom and bro , as Justin told petey , are not members of his family as defined in the conflict of interest legislation and not bound by its rules about declaration..

Just wanted to share this thread, maybe you can feature it in a later post about the Cons' useful idiots on the dirtbag left. It epitomizes EXACTLY how I feel about Jagmeet and the NDP gaslighting about O'Toole. And yes, this is why I hate Sanders as much as I do Layton, and for the same reason. Aiding and abetting fascism to own the "(neo)libs."

They shouldn't be allowed to call themselves "progressives" because their entire M.O. is to throw progress in reverse. Liberals, Democrats "Choose Forward" while "progressives" want to "Take Canada/America Back(wards)"!

Hi Jackie @9:36 PM...I'm not worried by anything the Cons are up to now. The important thing is to make sure O'Toole doesn't get away with his two face act. With his inability to deal with Sloan we're off to a good start. I don't want to underestimate O'Toole but I don't think he's going to be too hard to take down...

The religious fanatics may be only a minority but their fanaticism propels them forward, they are extremely organized, and they have big money (including American dollars) behind them. So they are a real threat, but because because their fanaticism also blinds them, they can't understand that Canadians don't go for that kind of religious nonsense because among other things it's too American. I do believe that we have them, or will soon have them, where we want them, and we are going to destroy them...

Hi JD...the Cons are indeed wallowing in their own excrement again, but as far as I'm concerned it's just a sign of desperation. They don't seem to realize that in the U.S. the battle is shaping up between the forces of decency versus the forces of darkness. And so I believe it will here. Being able to portray the Cons as Trump stooges is truly a gift from heaven. And as for that new Pew poll, I'm so impressed I decided to turn it into a post, and call it another victory for decency...

Hi Jackie @1:11 PM....Don't worry about Justin's health. Whatever he did during his vacation has made him look like a new man again, and with his polls climbing again, and his New Deal to look forward to, I think it's the Cons who are soon going to require medical or psychiatric treatment...

Hi rumleyfips...Not only are they a lawless bunch, they are also rowing against the tide. Canadians have already sent them the message that they don't want fake scandals to get in the way of fighting the pandemic. And if they still don't get it, they will pay a heavy price for their lack of decency, or failure to understand our Canadian values...

Hi Jackie @4:44 PM...Thanks for that thread, I will try to work it into a post I am planning to write on the hapless Con stooge Jagmeet Singh. I too am tired of his Con games, and while other lefties may be afraid to take him on, I am not, and look forward to the challenge...